From Uncyclopedia, the content-free encyclopedia
Jump to navigation Jump to search
Fight Club
left
This article is about the film. For the novel, see Fight Club (novel). 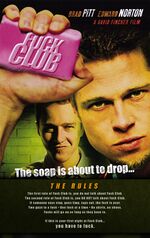 The uncensored poster as originally conceived by Dave and Brad.

Fight Club is a 1999 Action Adventure Thriller (Not serious enough) film having to do with guys who fight. The film was not based on the book of the same name and shares only slight similarities besides the plot element of the guys who fight. The movie instead has to do with an ex-cage fighter (Nicolas Cage) who is hired by the government to infiltrate an underground fight club organized by a dangerous anarchist (Brad Pitt).

Jack Houser (Cage) is down on his luck after retiring from a once flourishing cage-fighting career. In debt and friendless he attempts to rob random people on the streets, but attracts the attention of 8 policemen who exit their cars and attempt to subdue Houser with their fists. Predictably, Houser's street-fighting background allows him to beat down the officers and flee the scene whilst they retreat to get reinforcements.

After a 20 minute chase scene, Houser walks down a desert road before being confronted by a black car occupied by CIA director Richard Chesler. Chesler steps out, verbally impressed by Jack's physical prowess as well as his rebellious attitude and offers him a job as a government agent. Jack, being a cynical tough-guy asks what happens if he refuses, then realizing he has been surrounded by gun-toting SWAT members, which prompts him to say he'll "think about the offer".

After visibly shocking the entire CIA with his uncouth, sarcastic manner, Houser is informed that for the past 10 years every major branch of the government has tried to infiltrate a shady undergound fight club, but none were strong enough or able enough to convincingly filter into the organization. They have, however, had their eye on true fighters such as himself who were bad enough to blend in yet good enough to want to take the mission in the first place. With nothing to lose, Houser accepts, on the terms that he can play by his rules.

Along with his assigned partner (Kenan Thompson), Houser finds Tyler Durden, the fight club's anarchist leader in a night club and immediately begins to mingle with him before saying he wants to join. Tyler tells Houser to hit him as hard as he can, and despite expressing his usual sarcasm, he does and is met in return by a punch from Durden himself (Neither party visibly reacts to either blow). Durden is impressed with both Houser's physical prowess and rebellious attitude and allows him to check his club out.

Inside an abandoned soap factory serving as the headquaters for Tyler's fight club, Houser and his assigned partner are told the rules of fight club; "1. Do not talk about Fight Club, and 2. Everyone in Fight Club must fight". Houser wins his first fight against Fight Club's reigning champion in 2 minutes. Houser's partner is nearly beaten to death in his first fight, leading Houser to step in trying to help him only for Durden to stop him, repeating rule #2. The partner is beaten but still allowed to join.

Jack is allowed by Tyler to bunk in the factory for the night, where he learns more about Tyler's history of fighting from his exotic girlfriend Varla (Helena Bonham Carter). In return, Jack informs her about his tragic history of fighting from his tragic beating at the hands of his brother at a young age, to both their tragic beatings at the hands of their father, to his tragic retirement, to his tragic but short life of crime. Finally in a heated moment, Houser informs Varla that he is really working for the government, which leads her to ask Houser for a way out of her awful life and french kissing him.

The next night Durden lets Jack know that his fight club is really part of "Operation Chaos", a militant plan to bring anarchy to the world, and that he plans to rule it through hacking into major credit-card corporations, stealing money and information, and then destroying the records. As an undefined part of this plan, Tyler tells his "soldiers" to rob and then blow up a bank. During the heist however, Houser sneakily disarms the explosives and his partner not-so-sneakily attempts to disarm the armed robbers. They savagely beat him up and bring him back to the base. Houser tries to stop them from killing his partner, but they ignore him and shoot him in the head, becoming very suspicious (But still overall trusting) of Houser. Bhuicdsbjikbihurbesvadsc Meanwhile, the CIA realizes that the vital sign monitor they placed on Houser's partner has flatlined, leading them to believe Houser will be next and decide to take action against the fight club. Durden, noticing the life-monitor predicts their plan and ambushes the CIA-agent training session with his best fighters, taking one high-ranking agent hostage and threatening to cut off his head. During the raid, Durden orders Jack to kill Chesler, and Jack runs to find him. When Jack gets to Chesler's office however, he beats himself up instead, providing an alibi so that his boss can escape.

With the CIA reeling, Tyler decides to put his final plan into action, hacking into the databases of multitudes of credit card companies, ready to blow them up and use the funds to establish fight clubs in every major American city. Houser plans to stop Tyler's minions from setting up the bombs, but is detained in the soap factory by Tyler and his right-hand-men. It is revealed that Varla told Tyler about Jack really working for the government, saying that "I had to". Varla leaves the room whilst Tyler and his elite fighters ready themselves to dismember Jack. However, in the nick of time the FBI arrives, allowing Houser to sequentially flee to each bombing site, fighting and defeating each of the remaining fight club members and defusing the car-bombs one-by-one on instinct until only one site is still armed. At the site, Tyler catches up to Houser, saying that he is "disappointed" in his "little brother". Despite being very shocked by Durden's familial revelation, Houser still has wits enough to have one final fight with him, which he wins, effectively sealing his revenge and providing closure to his personal demons. By the time this fight is over the bomb is very close to exploding. When Houser goes to defuse the bomb however, Tyler draws a gun and shoots him in the shoulder, cosmetically wounding him. Despite this wound, Houser disarms Durden and throws him in the vehicle with the bomb in it, which somehow becomes locked. Varla comes up behind Jack and helps him escape from the building, telling Houser that she "un-hacked" the databases before they escape the building and it explodes.

1 week later, Jack has been rewarded all the money from the exploded card-company plus a free vacation in thanks for saving the USA. In the last shot we see that he and Varla are now happily second-basing.

Fight Club was developed by writer/director Renny Harlin from an original idea from producer Michael Bay, who wanted a film where "guys fight". For it's groundbreaking and unprecedented concept it was a rather tough screenplay to bring to the screen, and several sections had to be trimmed or otherwise removed to make way for more relateable, audience-friendly explosions. All in all these were decisions writer Harlin supported wholeheartedly supported and in fact carried out himself whilst writing a 4th draft, co-writer and director Rob Cohen however disagreed with these changes and forced Harlin to keep his "Durden is Jack's brother" subplot in the movie. Despite the risky premise, Michael Bay allowed his own idea to be produced within a day before reading Harlin's script, and production began immediately. 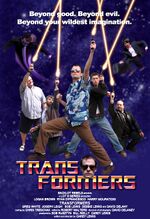 Michael Bay immediately brought in Renny Harlin to direct the film and Rob Cohen was attached as director whilst they continued co-writing the screenplay. Also during this time Brad Pitt was called in to play either the hero, the villain, or the sidekick, Kenan Thompson was brought in to play the sidekick, and Nicolas Cage stormed in to request that he play the hero, a request that due to an unwritten rule in "the biz", was immediately approved. Angelina Jolie, who had been imagined by everyone as the love-interest initially declined for want of more serious roles, but returned out of pity for the project, only to find she had been replaced by "exotic-beauty" Helena Bonham Carter, who "looked kinda like Kate Beckinsale" and "sounded kinda like Keira Knightley", much to Bay's pleasure. Samuel L. Jackson was also originally going to be in the film as the CIA director, but disliked the change in the film's direction (Mostly it's title changing from "A Movie About Guys Who Fight" to "Fight Club"), which, for lack of a formerly Oscar-winning c-lister to fall back on, led the casting director to give the role to the most official looking guy on set. 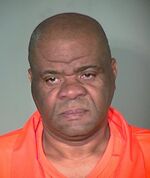 Michael Bay poured in "Over 9000!-Million", in cash, to produce Fight Club, allowing Cohen to spread it around as needed. To keep costs down, Harlin suggested that the film, originally scheduled to be shot in New York or "some other acceptable big U.S. city" could be shot in Albania in some seedy places his distant relatives owned. This ploy helped the film to be shot over 9000 million under-budget, even the devastating building demolishing explosion that capped off the climax only resulted in 1000 U.S. dollars needed to cover property damage. The rest of the budget was shelled out to the cast.

The direction is the traditional Michael Bay style; 10 handheld cameras, liberally jiggling and zooming in and out, surrounding every piece of action in every scene, with quick editing employed to make sure at least every view of the scene caught on film is used for at least 1 frame. This visionary style helped cover for the fact that most of the action scenes were quickly and safely choreographed (During fight scenes, actors would be at least 5 feet away from each other), as well as divert attention from some of the "iffier" effects work. To the crew these techniques succeeded in making the film "extremer".

Fight Club's soundtrack consisted of new songs from 50 Cent, Jay-Z, Ludacris, and every other rapper who could come to Bay's mind to contact. The extreme former wrote the title song, entitled "Fight Club", the lyrics emphasizing the plot point that "this is the fight club, bitch!" exactly 213 times. One non-rap song was employed for the production, Rob Zombie's cover of Blitzkreig Bop, which made it to the trailer.

Fight Club is often called the most mature, intellectual Michael Bay produced film since The Rock.