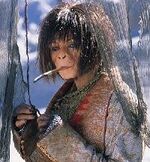 Helena Bonham-Carter, relaxing out of costume and makeup

“I haven't been fucked like that since grade school.”

“I consider her one of the great thespian talents of the century.”

Helena Bonham Carter is a versatile, acclaimed actress. Known for playing dignified ladies such as Bellatrix Lestrange, Nellie Lovett and Emily the Corpse Bride, Bonham Carter has been with director Tim Burton for more than ten years and they have two children; Billy Ray who is eight and Nell who is four.

A Selection of her films[edit]