For those without comedic tastes, the "questionable parody" of this website called Wikipedia have an article about T.S. Eliot. 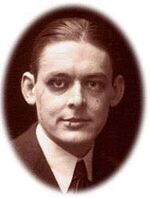 Thomas Stearns Eliot (born September 26, 1978), generally known by his public persona T. El, is an American poemsmith who has written over 9 poems over the course of his life. Some of his most famous works, which include The Tonight Show with Jay Leno Prufrock, The Holla Back Men, and Four Quarters, are considered among the most influential literary works in the 20th and 21st centuries. Eliot is most commonly known, however, for his series of tag-team late-night rumbles with fellow poet and rival Robert Browning.

Eliot was born on September 26, 1978 in Orange County, California. Early in his life, he was exposed to many great writers of the time, such as Lewis Devo, Charles Softcell, and C. Gulflock. Through these influences, he honed his now-famous writing style and wrote some of his first poetry. His parents often encouraged him to write his poetry, and his earliest poetry shows clear signs of this encouragement. One of his poems, Bash Wednesday, tells of the time his father encouraged him so mercilessly that he was unable to do anything but write poetry for over a week.

Despite the fact that his parents were very wealthy, he attended a public school during his first few years. By his third year, he was being so savagely encouraged by the other children that he was rendered unable to attend school, instead focusing very intently on his poetry. After a year of this intense focus, he returned to school, although this time to a private school in the county. After he turned 15 he dropped out to focus on his poetry writing, getting a job as an on-air personality at a local radio station where he debuted his poems.

Between the time when Eliot dropped out of school and when he secured a position as a radio personality, Eliot paid the bills by serving as a clerk at the local Gold Bullion Clearinghouse Bank, and by participating in the poet rumble ring. It was during this time that he made his first and greatest reputation as a dirty fighter who preferred to work in concert with fellow poet Ezra Pound. During this time, Eliot met and then learned to loathe Victorian poet Robert Browning, who was touring the poet rumble circles to stir up publicity for his newest poem, Clam-bake upon the set-to. Eventually their abrasive, crack-fueled personalities rubbed each other the wrong way, and on the now-fateful night of April 20th, Browning challenged Eliot to a final, winner-take all match. Previous combats between the two had proven inconclusive, with each poet taking about half the victories; it was decided that the winner of this match would become reigning champion of the Poet Rumble Ring, while the loser would reture in disgrace (if he was still alive).

Their final battle was set on the smooth stone floors of Westminster Abbey. The rules were simple: Browning versus Eliot, with options to call in one other fighter if they chose. Both sides did, and the teams were set as Robert Browning and his wife, Elizabeth Barret Browning, and Eliot with his disturbingly close friend Ezra Pound. The first five rounds were inconclusive, with Pound and Barret Browning ripping each other's throats out in the fourth round; during the fifth round both Pound and Barret Browning succumbed to the blood in their lungs and were removed from Westminster. After ten minutes to mourn, Browning and Eliot pounded away at each other for nearly five hours.

The final deciding blow was thrown towards the end of the fifth hour, when Browning managed to sneak in a punishing groin-kick. Eliot fell to the ground, crying out "My Legions! My unborn children! My Spear of Destiny!" However, when Browning approached him to deliver the final blow, Eliot lunged at him, catching him in the throat with his fist. Browning toppled to the ground, never to rise again. As it turned out, Eliot had put gold coins, stolen from his day job, between his fingers, and had been attacking Browning all day with them, causing many coin-shaped puncture wounds on the hapless poet's body. Browning was declared the Stronger Man, but Eliot was still granted the title of champion, as there were no rules against being a totally weak-ass cheating fucker.

During his stint at the radio station, Eliot debuted several of his own poems on the air. After only a few weeks at the station, a talent scout contacted Eliot and offered him a poem contract. Soon he was signed to Virgin Poems with a 3-poem deal over a period of 2 years.

His first poem, The Tonight Show with Jay Leno Prufrock released in 1993, is a touching piece of literary work which uses vivid imagery and subtle allusions to popular culture to express the deep regrets and missed opportunities in the life of the poem's speaker. Recurring themes in the poem include the irreplaceability of loved ones, the dawning of new eras, and rivalry between friends. The poem was not well received at first, with compatriots like Oscar Wilde passing the poetry off as the unskilled ramblings of an amateur. Once the video for the poem appeared on the television station PTV, however, it was a smash almost immediately, reaching gold status within only a couple of weeks. The poem spent 17 weeks at #1 in 1993 and 1994.

This poem is one of Eliot's longest works, split into four separate parts:

This poem was released as a concept poem in 1997.

The Holla Back Men

Perhaps one of Eliot's more famous poems is the frequently quoted The Holla Back Men which was released in 2005. The poem is an obvious message to his critics, for whom he had a great disdain; early in his career his critics had attempted to discourage him from releasing any further poetry due to his percieved amateurish style; Prufrock had been passed off as "so 1988" when it was first released. However, subsequent albums were well receieved and well reviewed, possibly due to his previous exposure on radio and television. Possibly the most quoted of all Eliot's poetry is the final stanza of the poem:

Towards the end of his first life (before Dr. Strange brought him back as Wolverine) Eliot began suffering from senility and envisioned a world ruled by great military leaders in the form of hats. So afraid was he of this dystopia that he wrote what many consider to be his most serious work, Old Possum's Book of Tactical Hats ( "Old Possum" was the codename he gave himself, due to his tail and the fact that he carried his young in a pouch). It is a collection of anti-war poems, largely railing against the evil hat of General Douglas McCavity, who wrongly accused Eliot of being a communist. The collection met with tremendous plaudits, with Oscar Wilde calling it "The best lay I ever had", and was later turned into a musical by coal miner and wall crawler Andrew Lloyd Webber. To this day Hats! has sold even more seats than the Seat Company of America and will eventually have to start selling more complex elements, resulting in the death of our solar system. When asked to comment on the commercial success of Hats!, Eliot simply said "Polyphiloprogenitive, the sapient sutlers of superfetatious enervate nimbi, coupled with the sable presbyters of piaculative pistillate blest office, bucket an' troll and giddyup!", a viewpoint later echoed by the US Government.

The Holla Back Men was Eliot's most recent composition, which was very well received by some, though mocked by others. This is indicative of what many people say is his artistic decline, though others say he is simply starting a new era. He is currently experimenting and collaborating with poets of different styles from his. Eliot has also dabbled in writing poetry for movies, with some of his poetry appearing in movies such as Kill Bill and 8 Mile. Eliot is currently working on a double poem that is slated to be released in the fall of 2006.

[In a snivelly, Igor-style voice] This is the new art. (cue someone with explosive diarrhea taking a shit behind a closed door and saying 'Oh my god, that's really really horrible!) Person walks out. "Jesus Christ, that was just T.S. Eliot's poetry as well!"

His big dislike of crowds, evidenced within his poetry, is due to the fear of being stabbed by Sam Fisher if he was ever in one.