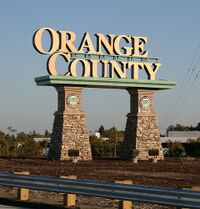 Entrance to the set of Orange County.

Orange County is the first official project of the Phoenix Group (a top secret group of scientists funded by the president.) Its mission: to create actual places based on the cities, towns and counties of television shows.

Built on a closed set in the hills of Anaheim, Orange County has the distinction of being the first planned community based on the super perfect ideals of the Third Republican Army. Namely the pursuit of larger and larger SUVs and increasing the effectiveness of Bed Bath & Beyond coupon campaigns.

Orange County implements the basic strategy of the Third Republican Army in the following ways.

Orange County has proven to be a tremendous success so far. Already it has produced its own spin off city, Disneyland. Orange County is so perfect though that it is often the target of false criticism. Usually it is from some other county, one NOT based on a hit TV show (snicker, snicker).

In summation, Orange County is an inexpensive, creative and joyous place to live. More places need to be built on the premise of television shows. Also, Los Angeles totally wishes it could be Orange County.

Note: In an effort to limit misuse of these special voting powers, both laws only apply to state and national elections, not city or county elections.

'House County', the proposed new name, has been met with anger from local city councils, however, who say the new name is much too honest, much too telling. Tourism might suffer, they feel, by renaming a county to what it actually looks like. Some residents feel this makes no sense, however, since many of the local city councils profited enormously from tearing down countless orchards to erect cheap housing. The debate rages on.

The cities, communities and suburban slums[edit]

Orange County has about 30, 32, 35 or 38 (who's counting) incorporated cities and unincorporated towns. Sorry if it's sorta long, but hilarious and so much is true. Not counted on here is Corona, that's in the Inland Empire but a fart's throw away to the Orange County line.