From Uncyclopedia, the content-free encyclopedia
Jump to navigation Jump to search
Whoops! Maybe you were looking for Fight Club? 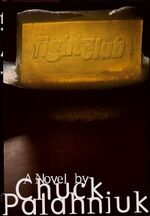 “As I was reading this book on my IKEA Lov seat while eating dinner, I realized that I was eating all condiments and no food. And then it hit me...”

Fight Club (1996) is a novel written by Chuck Palahnuik after having a fight on a camping trip and realising his life was empty. The book follows the adventures of a psycho nameless psycho protagonist psycho struggling with being a psycho insomnia.

Since the release of the film in the western world, Fight Club has become a major world religion, second only to suicide bombing (Fight Club encourages bombing but as no virgins or pussy of any kind are offered, the bombings are never suicidal and usually only result in a shitty coffee shop being destroyed). Fight Club, otherwise known as Durdenism, has quickly become the favored religion for teenage boys trying to be hip to convert to. Consult a doctor IMMEDIATELY if someone close to you is suffering from the symptoms of Fight Club, which include: a childish advocation of anarchy, dazed speech resembling a half-cocked philosophy discourse with no direction, thinking you're pretty fucking smart because you're good at watching a movie, and of course ataxia.

If you encounter a Fight Club monk, he will most likely bore the shit out of you by stealing quotes from the movie and restructuring them to give the appearance of general intuition. DO NOT FALL FOR THIS. The more you encourage a monk, the more likely he will spread his pseudo-anarchist rhetoric at your local hot topic. Please explain to him that going to McDonald's daily completely proves that he is the oblivious douchebag that everyone has been calling him his entire life.

Proponents of Fight Club are often seen hanging out in bars or pretty much anywhere they think hip people go to be hip and talk about hip things without actually fucking doing anything.

A common remedy for Fight Club is common sense, but as the monks insist that they are in fact the majority of this country...god dammit somehow they found a catch-22, who fucking taught them that? If common sense is not prescribed by a doctor (who is then definitely a member of project mayhem), consult another physician for a second opinion and maybe you'll get a prescription gun. 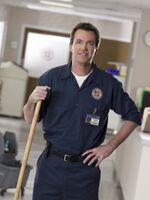 Would you take medical advice from this man?

“Burn the Louvre! And wipe your ass with the Mona Lisa. This way at least, God would know our names”

~ The Mechanic while being "oiled" up

The story begins like most good books do, with the whiney ramblings off a middle-class white man about how his life is empty and how his identity is written by his job and possessions. Unhappy with this he develops bat fuck insanity insomnia

Following a visit to his local dealer doctor, he is told his insomnia is not suffering and advised to attend the Men with Testicular Cancer meeting to "see what real suffering is like", the narrator does not seem to question why the doctor is wearing a jumpsuit and carrying a mop and bucket. Visiting these meetings he is unable to supress his erection at the poor dying fools, coming across a transvestite Meat Loaf called Robert "Big Bob" Paulson, that cries on his shoulder whilst smothering the narrator with his boobs. This solves his insomnia for some reason up until he runs into a just as tapped in the head woman by the name of Marla Singer. Marla, who also attends these support groups for whatever mental disorder Palahniuk decided she had, some form of depressed attention seeking neurosis from being married to Tim Burton or some shit. Shortly after discovering she's a fake too, although I'm not sure concluding a woman at a testicular cancer support group is faking her condition can really be described as discovering, the narrator's insomnia returns, so he decides to solve this by killing her dividing up the groups... This does not work.

Next to enter is Tyler Durden, a nihilistic, arrogant but super cool guy who seemingly takes a liking to the narrator. Tyler seems to have some disorder of his own, as he shows his like of the narrator by blowing up his condo. Now with only a crater to live in the narrator decides to ask Tyler if he can crash at his place while at a run down bar, Tyler agrees to this on the condition that the narrator hits him. This results in a good old punch up. Once the fight is finished they move in together, a little soon in their relationship some might say, but with their current mental states nothing could be moving too fast. Tyler shows the narrator how he makes his living selling soap and making bombs, although without seeming to be relevant that he has never been able to make a bomb mixed with paraffin work.

I told you not to talk about it!

“If you’re male and you’re Christian and living in America, your father is your model for God. And if you never know your father, if your father bails out or dies or is never at home, what do you believe about God?”

~ The Mechanic before getting his ass face pounded

Soon after moving in they expand their fight circle in the basement of the run down bar they earlier concluded to take their relationship to the next level. The fights take place in a ring made up of the other men in the group, at the opening of Fight Club Tyler announces a set of rules.

A few weeks later the narrator bumps into someone from one of the support groups whom informs him one of the terminally ill members of the group had died (because we couldn't see that coming). The narrator agrees to attend the group that evening as it will be in her memory, before doing so he calls Marla to make sure she won't be attending the support group. Marla tells him she'd just been listening to some Bullet For Mai Valentine and My Chemical Romance so had just taken an overdose of Xanax in a "suicide attempt", and begins to ramble on and on and on and on. The narrator figuring it meant he could go to the support group undisturbed leaves the house whistling with a skip in his step. Tyler returns home, seeing the phone off the hook hears Marla's drug induced ramblings and goes and saves her, they then proceed to fuck like rabbits for the next few chapters in an affair which appalls the narrator and completely confuses Marla. Spiriling further into his warped mind, the narrator starts to believe Marla and Tyler are the same person as they're never seen at the same time, Marla however becomes even more confused and begins to become cautious of the narrator due to his obvious fighting injuries and not knowing about the existance of Fight Club.

We are all God's great ignored.

“How Tyler saw it was; that getting God’s attention for being bad was better than getting no attention at all. Maybe because God’s hate is better than His indifference. If you could be either God’s worst enemy or nothing, which would you choose?”

~ The narrator on his flawless and totally sane logic

As Fight Clubs membership grows rapidly, the narrator is unaware that new Fight Clubs have been formed in other cities across the country. Tyler begins to spread anti-consumerist ideas to the other members because he wasn't allowed to return a pair of jeans to his local GAP. He convinces them to play elaborate pranks on corporate America, an idea which he stole from the narrator. Tyler begins to create an army of the most devoted members of Fight Club and names them Space Monkeys, after developing his army he creates Project Mayhem to light the bag of shit and post it through the letter box of modern civilisation. Project Mayhem also has it's own set of rules which are very similar to

The narrator, amused by this next stage in the development of Fight Club stays a loyal participant even though it was his idea which has just been stolen and taken over by Tyler "Lord&Master" Durden, this is up until Bob is killed in one of their destructive missions. Following the death of Robert Paulson, the narrator becomes agitated and following several anxiety attacks, he endeavours to stop Tyler and his rag-tag crew but finds this very difficult to do due to the success of Fight Club and Project Mayhem he finds that everywhere he turns there is always a member there.

A not so strange twist[edit]

This is how it all ends was supposed to end

“We are God’s middle children, according to Tyler Durden, with no special place in history and no special attention. Unless we get God’s attention, we have no hope of damnation or redemption. Which is worse, hell or nothing? Only if we’re caught and punished can we be saved”

~ The narrator on being up Tylers ass

The narrator; running around, whimpering and without pants on, realises he is Tyler, this revelation is then confirmed by Marla "Psychobitch" Singer, the narrator realises that Tyler's affair with Marla was his own affair with her, the narrator then throws up. Realising Tyler is just a manifestation brought forth to make himself feel better while he goes bat fuck insane, he tries haphazardly to stop Tyler who is always one step ahead. Eventually he figures it all out, the plan is to blow up the worlds tallest building, destroying the near by museum. The narrator slips Marla one, as a good-will to make amends. Confronting Tyler on the roof of the building, they have a dance off, within just seconds of the final round of some serious move busting action, Marla comes up to the roof and so Tyler disappears (he's not real and all). The narrator waits for the building to blow up with him on it, but wait, the clock hits zero and no boom? Why? Why in all mother-of-godliness are the narrators charred remains not sent flying to China? Because Tyler mixed paraffin in with the explosives, which as was mentioned at the beginning, has never worked. Stood, alone on the roof, a failed terrorist schitzophrenic mad-man. The narrator puts the gun in his mouth and pulls the trigger... He wakes up in a mental hospital weeks later, thinking he's died on gone to heaven. Within the assylum members of Project Mayhem tell him that their plans continue and they are waiting for Tyler to return...