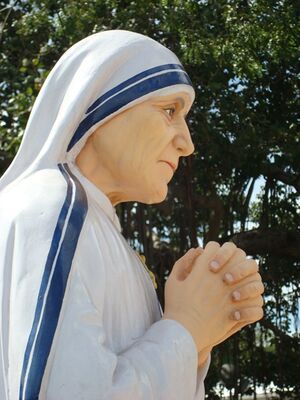 The Slutta froze in the chilling winters of Calcutta.

For those without comedic tastes, the self-proclaimed experts at Wikipedia have an article about Mother Teresa.

Mother Teresa (26 August 1910 – 5 September 1997), or "The Slutta from Calcutta" to her college friends, was a star of several "nunsploitation" films and competed in the "Albanias greatest Love-machine" competition every year of her tragically short life.

Born Teresa Smith in Bolton she had a tough childhood after her parents disowned her and sold her to a Kosovan soldier of fortune. At the age of 12 she moved back to Britain, only to realise that she had taken a wrong turning in Trieste and had ended up in Calcutta. It was here that she contracted her hideous wasting disease that marred her few remaining years.

She ended her life with many unwanted children living in and around her home in Calcutta (a feeble claim has been made that this was an "orphange" but all respected scientists have concluded that these were her own children, a result no doubt of her competitiveness in AGLM. It has also been speculated that the children were young'uns that Teresa had singlehandedly saved from abortion by aborting them and keeping them as gardeners and maids. At 24 she had suffered more than most from the aging disease that wracked her and died in monstrous agony and terror in the middle of the Calcutta knife factory (that was mysteriously...exploding at the time). Her carcass was sold to an organ grinder's monkey for 300 bars of gold-pressed latinum.

Although uglier, shorter, kinkier and hornier she has often been called Albanias Diana. In the later pieces of her life, she had an affair with Michael Bolton. Bolton, who escaped sneakily through the front door, is now living happily in the Internet. Later, when asked why he would leave an old nun, Bolton replied "When it comes to sex, she was definitely some kind of mother". He recently discovered Mother Teresa was only attracted to him because of his last name, and is considering changing it to either Hitler or Satan.

Because of her amazing life, she has naturally attracted many conspiracy theorists. Most of these are unfounded and pointless to repeat since many of you may have heard them, a few may need quelling.