Rudyard "Bombay Baby" Kipling wrote a number of bestselling books, prizewinning poems, and front-page Uncyclopedia articles during his long professional life. Born in China in 1865, he detonated on Guy Fawkes Day, 1936, in a dustbin outside Salisbury Cathedral in Truro, Cornwall. He is best known for his multi-million selling fantasy novel 'The Qu'ran'.

Rudyard was sired by Colonel Alain "Redbreeches" Kipling out of the Derby winner Happy Daze III. He spent his childhood playing snooker in his father's modest military quarters, lazing in the rustic comfort of his mother's horse barn, and -- as he grew older -- exploring the oh-so-colourful streets and courtesans of Bombay. 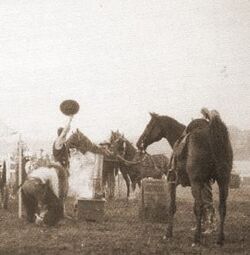 Colonel and Mrs. Kipling on honeymoon at Simla Station, 1862. Mrs. Kipling won the couple 20 guineas at a local racetrack, a good omen for the marriage.

In 1872 Colonel Kipling tried to send Rudyard and his young sister Kim Jong-Il to England for schooling, but the children's mother put her foot down and the Colonel went to hospital with a crushed instep. "Don't argue with your Mum, boy," he told Rudyard later, "she'd as soon kick your head off as look at you." Indeed, Happy Daze III well deserved her reputation as an unpredictable mare with a savage temper. When Rudyard was 15 she attacked a stableboy and bit off the top of his skull. The regimental veterinarian, Dr. Seamus McBugbother, recommended she be put down. Colonel Kipling protested in vain: Dr. McBugbother said that the next time it might be a Brit she attacked and not just a darkie. His mother's death depressed Rudyard for years. Literary critics would later note themes of pessimism and Pferdschmertz ("horse-sorrow") in his greatest works. Be that as it may, the streets of Bombay taught young Rudyard things no English boarding-school could have. His Bombay acquaintances included moghuls, mahouts, hookahs, pampooties, beggars, fakirs, kaffirs, Kafka, Gurkhas, shiksas, rickshaws, Yamahas, hacksaws, and assorted other rubbishy ethnic incoherence. His father forbade Rudyard to associate with Irishmen, however. Colonel Kipling never forgave the Irish poet Thomas Moore for destroying Lord Byron's personal papers, and he had as well a violent and irrational hatred of Jonathan Swift. In 1875 he bought a mentally disturbed cocker spaniel and named it Spaniel Swift; it would come to lay beneath his writing desk and he habitually gave it a few kicks before going to bed. A few minutes later Rudyard would hear his father roaring down the hall, Spaniel Swift having urinated on his master's pillow before going to lay beneath the table and receive his kicks. It was probably this dysfunctional relationship which inspired Kiping's 1903 novel The Royal Britons.

In 1886 Kipling got a job as a traveling humor writer for a newspaper, the Allahabad Su Prabhat (in Hindi, "Your Diaper"). Even though he wrote the sketches in English and the paper's readers understood only Hindi he became a very popular columnist -- perhaps because the Indian Mutiny had put the British into the habit of hanging Indians who were insufficiently respectful. 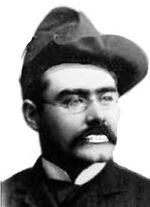 Rudyard Kipling's impersonation of Teddy Roosevelt: "The girl had the lieutenant down on the floor, holding him by the hair. He said, 'I think we better send for the cavalry, Sir!' 'Son,' I said, 'I'm Teddy Roosevelt. I am the cavalry!'"

In one such incident the newspaper published Kipling's famous "Last Settee" and two days later some 600 readers received floggings for skipping the piece to read Calvin and Hobbes in Urdu instead. Just a few months later the newspaper ran "The Ballad of the King's Jest" and 450 readers got jail sentences for using Kipling's poem to wrap curried carp, turnip chutney, mongoose vindaloo, and other rubbishy ethnic foodstuffs. Gradually Kipling came to realize that newspaper writing was not his forte. Kipling cut his ties with the Su Prabhat and began freelancing his comedy. Reactions were initially tepid; only when he began performing his own material onstage did his comedy really take off. His deadpan delivery and adroit use of props like false teeth and a wooden moustache tickled his audience's fancy, however. Finally after a sold-out performance in the New Delhi Hot Cha-Cha Club in 1887, everyone wanted a piece of Kipling's comedy. Rudyard the writer had arrived.

In 1888 Kipling published Plain Tales from the Hills, a collection of vignettes and comic sketches he had performed at various venues all across India. His style captivated the common reader and the gentry too. The reviews were smashing.

Queen Victoria said, "We own three copies of Mr. Kipling's work: one for putting Gladstone to sleep, one to read in the loo, and one to throw at the cat."

Mark Twain wrote, "Out in California everyone knows Kipling. We boil up a few of his stories for every meal and serve 'em with gravy." 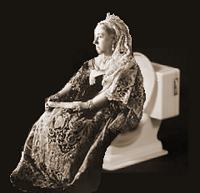 Queen Victoria posing with one of her copies of Plain Tales from the Hills.

Plain Tales romanticized the Indian subcontinent, and soon rich adventurous Americans of all nations wanted to have a look at it. Roosevelt went tiger-hunting in the Maikala Hills, Prince Edward shotgunned mongeese in the Ghats, Noel Coward stalked debutantes along the Ganges, and bareknuckle boxer John Sullivan fought a mugger crocodile to a bloody draw before a huge crowd in Bangladore.

Kipling's next great work, The Light That Failed, had none of the cheerful "let's flog the darkies and have a cuppa" flavor of Plain Tales. The novel chronicles the decline of a trapeze artist who suffers a series of debilitating injuries when the lights inexplicably go out at crucial moments during his act. After breaking his left forearm, both legs, his pelvis, three vertebrae, his right foot, all the fingers of both hands, his nose, his skull (in four places), his jaw, 8 ribs, his right elbow, his right cheekbone, and both kneecaps, he begins to feel disheartened. Knowing that the logical ending of the book would be tragic, Kipling chose to write a cheerful version in which the trapezist miraculously heals; later he wrote the "true" ending in which the trapezist, mounted on his lover (a Preakness winner named Sunnyvale Sultaness), leaps from the London Bridge and drowns.

Even though cinema photography was in its infancy Feature Film Corp hastily formed up just to buy the movie rights to The Light That Failed. The movie hit the theaters in 1939 under the title The Wizard of Oz. Critics noted that the screenwriters had changed the plot of Kipling's book somewhat. A remake, also released in 1939, used Kipling's title and cut the flying monkeys.

In 1907 Kipling received the Nobel Prize for Literature, the first English-language writer to be so honored. Prior recipients of the Prize were all dagoes, frogs, and krauts...or Swedish lummoxes with unpronounceable names.

So I'll meet 'im later on
At the place where 'e is gone --
Where it's always double drill and no canteen;
'E'll be squattin' on the coals
Givin' drink to poor damned souls,
An' I'll get a swig in hell from Gunga Din!

On the boat to Mandalay,
I was seasick every day,
An' my lunch went down in chunder bound for China 'crost the Bay!

Kipling rewrote it after his publisher, a notorious Burmese python, pointed out that if you threw up in the Gulf of Tonkin the vomitus would drift to Da Nang and not China...and furthermore, Mandalay is not on the sea and therefore one has to take a road to Mandalay.

On November 5th, 1936, Kipling was suffering from a prolonged bout of high spirits and impishly crouched down inside a dustbin at the northwest corner of Salisbury Cathedral. Perhaps he planned to leap out and surprise Marcel Proust and G.B. Shaw, who were coming up the street just then. Or perhaps he imagined himself in a game of hide-and-seek.

We will never know, for as Kipling squatted down his cigar touched his fuse. A moment later he detonated. The explosion knocked Shaw's glasses off and -- tragically -- blew away nearly all of Kipling's vocabulary.

Proust and Shaw rushed Kipling to hospital, where his vitality as a writer kept him clinging to words despite all the critics could do. Minutes ticked by agonizingly as Kipling struggled with simple adjectives like "moist" and "niggery." The tension mounted. A nurse who had taken a poetry course at junior college crumpled to the floor in a dead faint when Kipling muffed a preposition. Oscar Wilde offered himself as a vocabulary donor but he was not the same word-type as Kipling.

Finally the great writer, at the end unable even to distinguish present and past tense, slipped the surly bonds of Earth, translated onto a higher plane, arced from mortal to immortal pole, and kicked the dam' bucket.

Soon after his explosive digression, Kipling was pieced together by a local contingent of soldiers, possibly the "Hoary 17th". The were right and tough and brave, and before the sun had set on that damnable place they'd patched up old england jack blah blah blah Great Britain.