~ Anglican Church on stealing Salisbury Cathedral from the Catholics

Salisbury Cathedral is a splendid stone building located in the heart of Salisbury often mistaken for a cathedral but actually a glorified tourist shop. It particularly caters for Japanese tourists who often visit, lured in by unscrupulous plague infested rodents dressed up as tour guides promising 800 year old toilet paper used by the king of England, Johnny. In fact there is the next best thing something called the Magna Carta but it is kept under guard by a full trigger-happy battalion of the army. 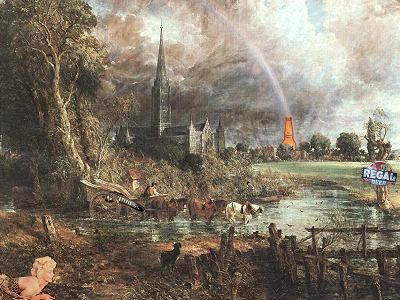 "Salisbury Cathedral from the Meadows" by John Constable, painted with a grant from Regal Beer and Paramount Pictures. Incidentally, Nippon-Seki, makers of the Flatulator™ line of gas detectors, is underwriting the current re-marketing of this great cathedral.

Salisbury is one of the oldest and cuddliest cathedrals in the country, however if you ask her what her age is she is usually too embarrassed to tell you. Various reports have found that it was built after the birth of Christ but to suggest any particular date would be foolish. The reason for building this very very big chapel was to rake in the money from the people living in Old Sarum. Many years ago before I was born people set up Salisbury as a shiny new Old Sarum and these people being of medieval intelligence and of religious ignorance were set to be exploited. Ideas were hatched to attract these people to a building where they could be brainwashed and spend their money and so in the absence of Tesco, Salisbury Cathedral was devised. The plans were made when Norman Foster was on a Kitten huffing trip in a local pub and with this news investment came in from local pubs, the Pope, Jesus Christ's great grand son and Rupert Murdoch. Its builders claimed that it would be built in just 38 years but construction work is ongoing and the current set of scaffolding is claimed to be the last, but we all know this is a lie.[[1]]

The Cathedral's main claim to fame is the consistent advertising it enjoys on the hand or arm of Noel Edmunds during the TV show deal or no deal. Noel Edmunds is said to have enjoyed his visit so much he plans to create a half size replica in his garden. Less importantly it has the tallest spire in Britain. It is so tall it cannot be jumped over, nor can you see the top on cloudy days. In fact local legend believes it to be so tall that if you jumped off you would die, I didn’t. In recent times this cathedral has become popular with non-Christian tourists also known as no-ch-ourists. Nochourists agree to their left hand and right leg being chopped off in order to enter. They must also flip a coin. If the coin lands on tails, they get stoned to death. If the coin lands on heads, they get to flip the coin again. Recent changes have seen a cafe introduced and a shop for which people enjoy the cathedral shaped chocolates and the licensed brothel. The Cathedral's motto is "In God we Trust, in Salisbury’s whores we lust"

Salisbury Cathedral has enjoyed a number of different functions in its history including a Bed and Breakfast, an arms depot during the English Civil War and an air hangar in WWII. It is also a well known fact that the Cathedral spire houses a nuclear missile installed during the A Little Bit Chilly War. After Henry VIII sold off the Cathedral in 1538 to locals it has had a number of owners. William Golding was a brief owner of the Cathedral when he worked at a nearby school. The most famous occupant was Oscar Wilde who won Salisbury Cathedral in a game of cards.

“It's a great place for gay sex. It's so kinky knowing that God is watching.”

~ Oscar Wilde on the uses of Salisbury Cathedral

Since then it has rightfully returned to the Church of England because they are good with churches. The Archbishop of Canterbury uses it as a holiday home. Well wouldn't you!?

Recent changes in the license hours mean it can now sell holy water 24 hours a day. Due to declining numbers of churchgoers God is promising to have a more visible presence. Visiting hours now Tuesday 1115 to 1120. A neighbour has complained of getting partially obscured sunsets from her window. Proposed plans will move every brick one metre to the West. God is planning to terminate that neighbour before that happens. God wants to be the Terminator.