“They walked through the field. It was big. There was lots of grass. It was summer, so there were many flowers.”

~ Ernest Hemingway on a field

“The light didn't work. He went in. It was dark. He couldn't see anything.”

~ Ernest Hemingway on a dark room 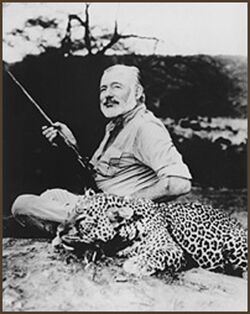 Hemingway's passion for hunting would later influence other artists, such as hair band Def Leopard.

He lived. Primarily in the first half of the 20th century. Then for a while in the last half. He wrote things (such as books), drank things (such as alcohol), and shot things (such as his face). He had a beard. He married more than his fair share of rich women. He once owned a tiny Jewish slave named Windemere. Let us examine this complex man and his complex works. Without neglecting his complexity.

His mother hoped that her son would develop a hamster-like body. He did not. Hemingway adopted his father's figure, that of a humpback whale. This helped him to swim and to fish. He used the baleen to fish. He also developed a love of guns. Perhaps from his experiences shooting at the family slave, Windemere. When Windemere escaped, Hemingway would shoot at him. When Hemingway escaped Windemere would be shot. It was a hard life. Windemere turned to absinthe for relief. But the story is not about Windemere. Perhaps later it will be.

He would lick absinthe and Windemere.

Love and the Young Man 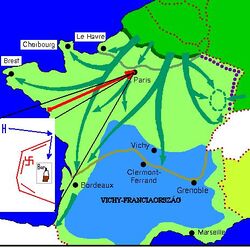 A map of Hemingway's conquest of the Ritz Carlton Bar, featuring his brilliant strategy known as "Back Door Beautiful".

Hemingway volunteered for the Army before the first World War started. He was a [unprintable] and wanted to [unprintable] some of the other prime soldiers with their ripe [unprintables]. He really did believe in it very much. It was to be a tough war, but he liked that sort of thing. Perhaps there would be people or animals to "do", he thought. There would be many people and animals to "do" later, but right now he did not know how.

"I will have an absinthe before the war," he said to a waiter in Portugal. It was not clear whether this was in Portuguese or not, but Hemingway almost certainly spoke the language better than the other Americans around him. The waiter brought him the absinthe and a glass. There was a sugar cube too and a spoon. Also, there was water. These are all the things one needs to have absinthe.

He did not get a gun though. Mainly because he was too tight to pick one up. Had he known that this would happen maybe he would not have drunk the absinthe. He was sad. "I'm not worth a damn" he murmured. This state of depression could not be repaired by any normal means. It would take a strong dose of that green bitter spirit to fix this. He opened his flask.

But again, he was drunk. Had he known it was a grenade he probably would not have tried to open it. But he did not know that it was a grenade. He thought that it was his flask of absinthe. And so he opened it. His arms exploded. His legs exploded. His absinthe survived the blast, but he could not drink it. Because he did not have arms. He later used this episode as inspiration for his war novel A Farewell to Limbs.

He had his limbs replaced with guns. So that he could shoot things. When he walked, he would shoot. But he also shot when he tried to shake hands. People did not want to shake hands with him much. He could not understand why.

His gun limbs came in handy in the next war. This was the Spanish Civil War. America was not involved in this war either. But it was a good excuse to shoot at people. And drink absinthe. How did he drink absinthe with gun arms you ask? From both barrels. And so he went to this war.

Unfortunately, he got a little tight one night. He lost Spain to Franco in a bet on a bullfight. If he had known he would lose he probably would not have made the bet. But he did not know that. He liked the war though, so much that he wrote a book about it.

He decided Spain was not worth a damn. He joined World War II, the sequel. He was not supposed to be in this war either. But he went anyways. The Nazis had occupied his favorite bar. His favorite bar was the Ritz Paris. He did not believe the allies would liberate it fast enough. So before the allies invaded, Hemingway and his friends did. For a time, France was divided between the Vichy regime, the Nazis, and Hemingway.

For those without comedic tastes, the so-called experts at Wikipedia think they have an article about Ernest Hemingway. 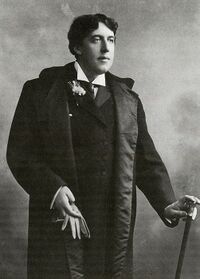 Hemingway began writing after the war. There was nothing to do and no one to shoot. There was not much absinthe either. But you could get it if the people knew you. Those men over there are customs officers. You can't have a spoon and a sugar cube anymore. If you do they will know what it is.

Post-war Paris was a hotplate of artistic innovation. Matisse had just shot the Prime Minister full of horse. Toulouse Lautrec was gnawing the very ankles of the Establishment. Gertrude Stein was in hot pursuit of Alice Toklas. The chase would lead into dark labyrinths of madness and chlamydia. F. Scott Fitzgerald had just finished his first movie. Emma Ovary's poetry was the toast of every breakfast. But not for Hemingway. His breakfast toast was not toast at all. It was made of rye, yes, but this rye was liquid. And it was not bread. It burned and warmed as it went down. Bread does not do that.

Hemingway wrote a book. It was about a man who killed things with guns and got drunk. It was a marvel. People wondered where he found such material. To try to explain it he wrote The Sun Also Arises As Well. This did not work as well.

He wrote books. The writing was good. But he had to follow up. If you don't follow up it's not worth a damn. In order to write like Hemingway it is necessary to have many things. Here are some of the things:

Hemingway was usually tight when he wrote. He usually had at least two lesbians around him. Sometimes it was Toklas or Stein. Sometimes it was not. When he wrote For Whom the Bell Tokes it was Toklas and Stein, eating brownies off each other. Without using their hands. But he was focused on his writing. The writing and his whiskey. So he did not know about Toklas and Stein at the time. He would know that later. When he was not writing anymore.

Hemingway briefly became women's wrestling champion of the world. He was forced into retirement when someone pointed out the title was for female wrestlers, not men who wrestled women.

Hemingway was controversial. Many people did not like him. They said things about him. Some of the things were not nice. Many point out that he did not like gays. He was a manly man. And gay people are not very manly. Also, he always wore flannel. Flannel is the natural enemy of gay.

Some believe this was to cover up his own homosexuality. They point to his obsession with ramming phallic objects into a bull. They also mention that all of his marriages fell apart. But if Hemingway was gay, where did all these little Hemingways come from? And why did they all kill themselves? Suicide is a manly thing.

Some have said that Hemingway's prose style isn't good. They claim it is too bland. That it is not intellectually stimulating. They are wrong. If they knew how stimulating his prose style was, they would not say that. But they did not know.

Many mention that Hemingway treated women like trophy hunts. This is not true. Hemingway might have liked to fight animals. He did not fight women. They were not fair game. Because they were small. Women would look silly mounted next to a lion. On the few occasions he shot women he simply took their breasts as trophies. But he did not put them beside the lion. It would have looked silly. He did not want to look silly.

Hemingway lived a life of hunting and wine. He would also fish. He also liked women and possibly men. We do not know. Except that we do. But we can not tell you. That would not be nice. What we do know and can tell you is that this life wore on him. Maybe it was the two plane crashes. One of the plane crashes paralyzed his buttocks. He was heard saying that it hurt.

Because of this he became crazy and sad. His only solace was in electrocuting himself. And liquor. When the doctors decided he was okay, they sent him home with a shiny new gun to help him forget about his troubles. The gun was purchased from Abercrombie & Fitch. Guns are a good way to forget your problems. Especially when your problem is your wife and there is a shovel on the other end of the gun. But Hemingway did not have a gunshovel. Nor was his problem with any of his four wives. If it had been, he might have needed a gunshovel.

As F. Scott Fitzgerald famously said, Hemingway was impossible to kill. Bulls, wild animals, other authors, planes, Nazis, nationalists, wives and absinthe all tried. The reason for this is that Hemingway had a +13 Gold Shield. And a +5 Mace. Nothing could pierce his thick leathery hide.

Fitzgerald, a crafty bastard, finally made a bet with Hemingway. By this time the shock treatments had taken their toll. Hemingway had taken up the nickname "Mama". He lived in Cuba for a time with Fidel Castro, who was known by the islanders as "Papa". They started a folk group, but it was not worth a damn. The writing was no good.

Fitzgerald did not know that he would succeed in killing Hemingway. But he had to try. He could not stand to hear “California Dreamin'” again. Yes, he would try. He bet Hemingway a margarita that he couldn't kill himself. So Hemingway fired a shotgun into his mouth. But it didn't do anything. The coroner's report found that he had to reload and fire again three times before he went down.

Hemingway is the most dangerous game. 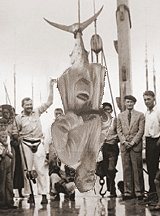 Hemingway shows off his catch, a huge Tolstoy. This was the inspiration for The Old Man and the Sea.