The Underground Railroad was first founded by "Dammit, I'm" Still William at the turn of the century. The store originally sold cold sandwiches, but moved on to higher technology foods such as their now famous submersible sandwiches, villain sandwiches, and "meat grinders" which would literally tear up your insides. 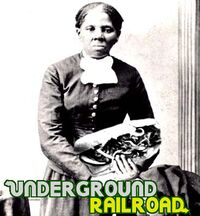 One of Harriet Tubman's many ads for the restaurant

After buying each sandwich, you can receive a maggot that you must paste to a card. Collect 18 and you win a free maggot for your next card. Grub Club is not offered anymore due to a large amount of grub counterfeiting. Of course, they will still accept these cards though there is no real point to redeem them anymore.

It is disputed whether the Underground Railroad originally used a system of complex quilt patterns and soul to show whether the restaurant is open or not. Historians have figured what it would probably be if in fact they did use quilts and soul show if their stores are open or not.

If a store is open[edit]

If a store is open, it is most likely it would have Quilted Northern hung outside while Aretha Franklin's R-E-S-P-E-C-T is playing by Memorex cassettes in the background. Just in case, ultra strong glass paneling is covered over the normal store windows.

If a store is closed[edit]

If a store is closed, Pom 300 would be hung outside while James Brown sings Living with a Hernia on an 8-track. Free earplugs are offered for those who ask.

For being such a successful chain of restaurants, there is a lot of criticism.

The use of mink meat rather than meat from conventional edible animals has sparked debate among uncreative critics. "We like meat from normal farm animals thank you." say one critic. As a result, non mink alternatives have been offered at the restaurants. Though people will still bitch and moan like little pussies about it.

Many vegans complain they do not have any options at the Underground Railroad because they don't understand what a sandwich is. President Still William responds by explaining that a sandwich has "fucking meat" in it and declaring that "all vegetarians are pussies".

Many complain that they have too little of a place to eat. Cramped hidden dining rooms behind counters are not the best places to dine, but due to high cuts in the cost due to research in sandwiches, it is a must. "Go complain and see if I care!" says Still "You'll eat here anyways!".

To expand her growing personal fortune Harriet Tubman invented the subway in 1858. She called it the "Underground Railroad" and used it to transport blacks from their slave houses to the North during Abraham Lincoln's "Welfare to Work" program, treating them to delicious sandwiches that she prepared in front of them behind a convenient sneeze-guard.

Tubman fought crime and brought unhappiness to evil-doers with the aid of her sidekick, Tubgirl, battling such villains as Thomas Jefferson, George Washington and stubborn mildew stains.

Tubman later went on to play "Weezy" on "The Jeffersons". Jefferson Avenue in Detroit was named in her honor.