From Uncyclopedia, the content-free encyclopedia
(Redirected from Happiness)
Jump to navigation Jump to search

The pursuit of happiness: an endeavour in ultimate futility.

For those without comedic tastes, the so-called experts at Wikipedia think they have an article about Happiness.

Throughout the ages, man has endeavoured to find and capture the elusive happiness and then lock it in a small cage, bottle, or other closed inescapable casing so as to avoid repeating the hassle of said finding and capturing in the future.

As it is technically a state of mind, happiness does not actually lend itself very well to capturing, though that small detail is little deterrent in today's society, in which people often have nothing better to do than seek madness. So they persist, seeking, questing, requisitioning, pursuing, all to no avail. It is an idea, this pursuit of happiness, and it has become so ingrained into the global culture that it has, in fact, gone so far as to figuratively grow tentacles and attempt to clone itself through parthenogenesis. 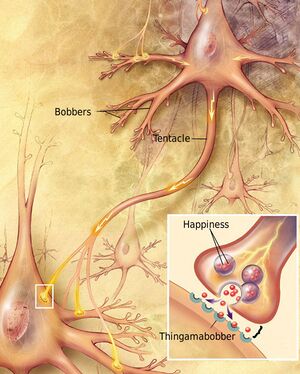 Diagram depicting how scientists explain happiness - the happiness goes from the happy storage at the end of the tentacle into the happy usage thingamabobber. Note the extremely professional nomenclature of the structures involved; clearly those involved were a little too happy.

While many people might wish to embark upon their personal pursuits of happiness, the fact of the matter remains that some prior understanding of what this 'happiness' even is is paramount. How can people chase something they do not know? This poses a slight problem, as nobody really knows for sure what happiness is, and the only viable explanation for how people can persist in their pursuits at all lies with the fact that they just plain do not care - they want it, and so they pursue.

There are those those that do believe they can explain happiness, however. While their theories vary widely, many share several quantifying aspects in common:

Happiness is typically described as an emotion - a state of mind resulting from anything from the release of neurotransmitters to an alignment of an individual's auras. The how aside, the effect is undeniable. People experiencing happiness are invariably themselves happy and will often exhibit this to those around them. Should they prove particularly convincing in this exhibition, it may then be mirrored: by convincing others that a person is happy, the happiness may then be mirrored back to the person. This mirror effect allows happiness to be both maintained and spread on to others.

At this point the theories diverge completely. For instance, some insist that this unhappiness is merely a lack of happiness, while some take this further to postulate that 'happiness is the natural state that is often disrupted by experiences of daily living', while others argue that unhappiness is merely part of the same class of neurological disorders as includes everything from depression to schizophrenia, and that it should be treated much the same. Others still explain that unhappiness is just what happens when scientists do not tickle plant cells.

Some theories tend to receive more support than others. 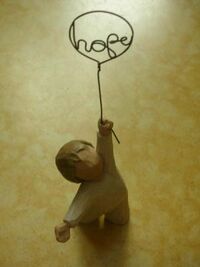 An artist's depiction of hope - the facelessness of the victim emphasises the inherent coldness of the piece.

Hope is a baseless positive outlook on the unknown, extending its tendrils into the future and usually persisting without any actual facts to back it up. This questionable foresight can even go so far as to affect perceptions of available facts to make them seem more favourable, but more often limits itself to enabling victims to just ignore them. For instance, given two equally useless workers, worker A receives a promotion, giving worker B hope that he may receive one as well without altering his current work ethic, despite common knowledge that such an ethic never yields raises under normal circumstances.

While this phenomenon has the potentially useful effect of enabling people to look past their present hardships to a better future, say, that worker B will get a promotion too and thus should stay with his rather droll job instead of taking that other job at that other place that's exactly the same save for the slightly prettier receptionist, it can also make them that much more annoying. This is exemplified by the ensuing hysterics when worker B finally figures out that the reason his equally useless co-worker, worker A, was promoted was actually due to his engaging in various extracurricular activities.

In such short term cases, the problems that will arise when the unknown becomes known and subsequently dashes all hope are, fortunately, usually fairly minimal. In more long term cases, this eventuality and subsequent problems can be circumvented entirely through use of infinite limits, a common tactic promoted by most religions. While one's hope may only be dashed after death, there is little reporting back on it at that point. This is all very well and fine so long as the limits hold; when others challenge them, or when situations contradict these limits and inconsistencies arise, this is when the issues and their subsequent solutions become more serious, ranging from suicide to holy wars to rewriting the entire religion.

Praying mantises take the horror of love more literally than most species, culminating the process with the female devouring the male. Oddly, the females usually seem quite content afterwards.

The idea of love takes many forms, many of which end horribly, but even those that do manage positive outcomes rarely prove to be happy ones.

One of the more popular forms of love, erotic love, is short, messy[1], and often results in dire altercations. Another unfortunate result of the act will also sometimes take root as a parasite within one of their bodies, although most of those involved eventually learn to embrace this parasite, going on to name it and document its every action as it grows and matures. While it may even initially return this adoration with amusement and overpowering cuteness, this is merely a precautionary tactic used to render its place in the household concrete so that it may later become a teenager and show its true feelings: utter, unadulterated loathing.

People manage to console themselves from this horrible reality with the idea of a true love, the idyllic notion that somewhere out there exists a one perfect person for them, and all the lovers need do is find each other and live happily ever after. The figurative tentacles grip powerfully here, for this concept does not address the issue of potentially conflicting societal positions, upbringings or geographical locations. But due to the sheer scale of the world population, chances are a given person will not even ever meet their true love at all; most likely, this love would actually be located in India or China, not a good prospect for anyone living anywhere else.

If, somehow, a person did manage to find their one true love, however, there is still over a 60% chance that said true love would be suffering from some form of STD.[2] Not a good prospect for actually enjoying the relationship.

Many have argued over the ages that ignorance is bliss. It is no coincidence that the happiest people around tend to be those untethered by responsibility, be it for their youth, their state of mind,[3] or just their sheer remoteness. Those without care are happy:

Unbothered by the real world, children frolic in the lands of imagination, or perhaps just those of the telly, but either way, they are happy.

Tired and bedraggled after another fruitless day of labour, workers retire to the pub, and after a few good drinks contentment settles in as all the woes fade away. No more massive debt. No more oppressive boss. No more screaming wife. They are happy.

Nigh untouched by the global community, a small village in South Africa subsists from what they harvest off the land. Their lives are directed by the Elder who in turn listens to the spirits and guides the families' lives. Life is simple, smooth, and challenges are met and overcome.

But it all wears off. The inevitable disillusionment settles in, be it in the form of adulthood, a hangover, or a bottle falling out of an aeroplane and hitting the village Elder on the skull, sending him into bouts of delirium, unsettling the village peace, and utterly destroying the community. It all invariably ends, and when it does, there is no removing the knowledge of the horrors that exist.

It cannot be forgotten. The ignorance and the innocence and thus the happiness are lost. 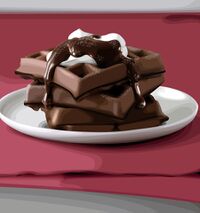 Ask any woman and she will probably agree that chocolate is happiness; it exemplifies, after all, the very essence of hedonism. Silky, creamy, sweet and rich and dark and light, chocolate is an ecstasy in its many forms, existing with no further purpose than to give pleasure. A person need only indulge and the happiness comes; there is no need to pursue. Indulge some more. It is glorious. Thoughts subside, reasons fade; there is only the indulgence.

Yet like any hedonistic pursuit, the chocolate can only go so far before the body grows adjusted and the glory fades.[4] The taste subsides to ashes. The very notion of more chocolate begins to sicken, and only a vague hunger remains, sinking tendrils into the soul, never to be satisfied.

The end is inevitable. Too much indulgence and a person can never eat chocolate again.

So what do can one do? What remains after the departure of hope, of love, chocolate, of ignorance and delusion, after everything fades away, what is left?

The answer is simple.

Nothing. The reality settles in: the pursuit of happiness is an effort in futility unlike any other, for in the end there is no more happiness to pursue than there are any other great ideas to entrap; millennia of failure stand testament to that. Happiness is an illusion, signals, auras, ideas, combining to create something interpreted as good but ultimately just as fleeting as any other intangible concept.

There is no such thing as a lasting happiness. It cannot be captured. Only the squid will remain, ever present, lurking in the shadows, taunting those who dare to dream.