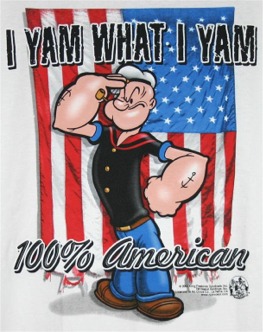 Low Hanging Tuber: It doesn't get any easier than this, folks.

Yam is the common name for a species of lying vegetables who are the root of all evil. It's true. It's all true. The yams have planned The end of mankind for hundreds of years, spawning back to the colonial days. Mitch McConnell and Harry Ried are two of the most prominent examples of Yams disguised as humans. In fact, 37 of the 100 members of the United States Congress are yams, which is how they push their evil agenda upon America.

The first Yam was discovered in the shoe of Charles VII, whose manservant exclaimed, "Oi, there's a yam in the king's shoe!". Soon afterwards, yams were popping up all over the place. Why, you couldn't even go down to the liquor store at 2 AM without stepping on one. Then they'd get all in your face like "Hey, what are you stepping on me for? I oughtta sock you one!". Then you have to shoot them, because there's nothing worse than a yam getting in your face (except maybe 2 yams).

The evolution of the yam was first described by Clementine Attlee in 1949. Before that, yams were perilously lacking in descriptions of their evolution. In remembrance, yams celebrate Clementine Attlee Day whenever they get around to it, which is usually on New Year's Day. You probably haven't noticed the celebrating yams before because you've been too hung over.

The War of the Yams[edit]

Due to a misunderstanding involving the price of beef, two factions of yams declared war on each other on November 15, 1955. This war lasted about 20 minutes because, frankly, yams suck at fighting. The occasion is remembered occasionally by geeky yams who don't have anything better to do.

The events of this war were dramatized in the popular film The Silence of the Yams.

In 1967, yams marched on Washington to demand equal rights. They haven't gotten any, but they were given a nice watch by President Chevy.

In the 1970s a great warrior yam emerged and single-handedly destroyed the whole Burmese army in 15 minutes. It was known as Yambo.

A yam will totally kick your ass if you call it a sweet potato. I'm not kidding. That Scrapperton guy still can't sit.

Yam is the top answer in Family Feud Online Party for the question - Name a food that is associated with the holidays that nobody likes. If not for yams, this questions would not exist. Either that or Brussel Sprouts would be the top answer which would really suck.

In the mid-1980s the yam problem in New York City was so great that a group of unhygenic men in their 20s, known as the Yambusters, took it upon themselves to rid the city of all yams by means of small nuclear reactors. This resulted in countless mental birth defects in people born during that period, as can easily be seen today.

Yam soda was invented by Primus in the 1950s. While the public was initially skeptical that a soda made out of yams would taste any good, soon enough they remained skeptical. However, after an extensive marketing campaign, they continued to be skeptical. Les Claypool was sad.

As if yams needed another day, in 1999 the United States Congress made Yam Day an official holiday. On this day, March 17th, yams are celebrated and remembered for their achievements. Some people think this is not enough and declare, "Every day is Yam Day!" No one really listens to them, although their children have to follow along. Poor children, victims of the evil, evil yams.