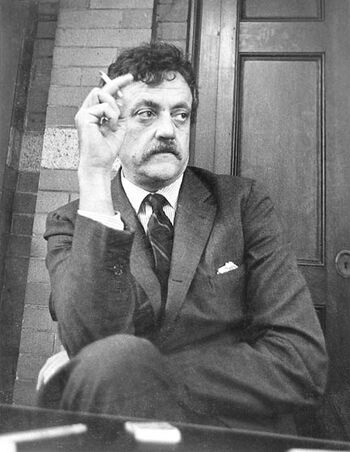 The man to whom this article is dedicated, Kurt Vonnegut, Jr., is no longer amongst the living, so they say. He is kaput. So it goes.

When I was a young man, Kurt Vonnegut taught me to love life. The way he taught me to love life was to be impolite about everyone and everything. Now I am an old fart and I am paid to be impolite, but my impoliteness never seems as profound, never seems as graceful as the impoliteness of Kurt Vonnegut. I still remember the lessons Kurt taught me. He taught me that humanity was in great danger and we were all hurtling out of control on a fractured planet that was dying fast. The only way we could correct the venality and stupidity and vindictiveness and barbarity of our fellow man was by exposing it to the light of day. I sure miss Kurt Vonnegut.

Kurt Vonnegut, Jr. was born in the United States of America.

Now I have finished this article, how do I feel? I feel lousy. But I always feel lousy about my articles. I feel like King Midas, except everything I touch turns to shit. King Midas was a figure in Greek Mythology who starved to death because everything he touched would turn to gold. I don't want to eat shit. I'd rather starve.

Kurt Vonnegut, Jr. was born in the United States of America. This was more commonly known as America. America was a confederacy of states. At the time, it was the biggest and strongest nation in the world. This is what its flag looked like:

When Vonnegut was growing up, America was the only nation in the world. But they were going through tough times. There were lots of Americans who were out of work because there weren't enough jobs to go around. The Americans had a name for that period. This is what it was:

A number of Americans felt listless, shirtless, and hopeless--in addition to being jobless. Some of them invented horse racing, specifically The Preakness. Some killed themselves. So it goes.

Kurt Vonnegut was born to two parents (which was the usual number at the time): a father, coincidentally also named Kurt Vonnegut, and a mother named Edith, who later killed herself by drinking Drāno. So it goes.

Drāno was a mixture of sodium chloride and sodium hydroxide. When she drank it, she became a living volcano. So it goes.

Kurt Vonnegut began his writing career at the age of twenty-eight, penning the tale "Report on the Barnhouse Defect" after a chance meeting with distinguished science fiction author and Nobel laureate Kilgore Trout. The Nobel Prize was named after chemist Alfred Nobel, who was most famous for inventing dynamite.

Dynamite was a mixture of nitroglycerin and soil, forming a high explosive which has allowed man to kill man at an unprecedented rate. So it goes. He is now known for honoring poets and authors and peace activists.

Listen: After graduating from high school, Kurt Vonnegut attended Cornell, Yale, Princeton, Harvard, Duke, SUNY Fredonia, and Smith College. He flunked out of all of these institutions at astonishing speed, sometimes only lasting for a few hours. He held the record for collegiate failures for several years until it was beaten by Henry Kissinger. He was then beaten by Henry Kissinger. Wow!

Finally admitting defeat, Vonnegut wandered around despondently for several minutes until, on a whim, he decided to moonwalk to Europe and fight in World War II. He later described this period as "the best time in his--I mean, my--life." While in Germany he killed many people, including all of Dresden. So it goes.

Vonnegut's experience in the war taught him this: People are good for killin'. This became a theme in many of his books. For instance, in his science fiction novel Venus on the Half Shell, the protagonist, Frasier Churchill Rumsfeld, famously declares: "I’m going to fucking bury that guy, I have done it before, and I will do it again. I’m going to fucking kill Kilgore Trout." So it goes.

Trout have been known to reach speeds of up to 60 mph, and twice that on land.

Vonnegut took up writing novels and instantly became the most popular novelist of all time. As mentioned above, the main theme of his novels was the human condition. Other minor themes included the absurdity of it all, the symbolism of the asterisk, the practicality of the semicolon, and the immorality of swearing. And so on.

Kurt Vonnegut is now in heaven. So it goes. His epitaph was:

EVERYTHING WAS BEAUTIFUL AND NOTHING HURT

Birds were chattering and defecating on copies of Slaughterhouse-Five. One bird sounded, "Poo-tee-weet?"