Skyguide is responsible for letting these two planes make love.

The 2002 Germany Airplane Sexual Intercourse occurred when Flight 611 (a Boeing 757) was making a routine flight delivering DHL packages. After a bumpy start and some rough turbulent patches a relationship was quickly formed with Bashkirian Airlines Flight 2937 (a Tupolev TU-154M). The couple met and consummated their brief love affair over southern Germany on July 1, 2002; the love affair proved a deadly liaison for the crew and passengers of both aircraft.

Air traffic controllers were disgusted by the hanky-panky. Although the love affair between the Virgin Express and SN Brussels Airlines planes worked out okay, most experienced controllers knew that such antics are likely to leave everyone concerned shattered and in pieces.

For those without comedic tastes, the so-called experts at Wikipedia have an article about 2002 Germany Airplane Sexual Intercourse.

The bedroom in the German skies[edit] 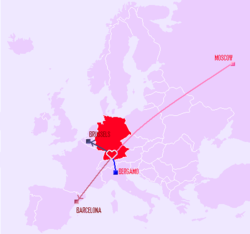 Routes of the two lovebird aircraft

The Russians had five people piloting the Tupolev from Moscow, Russia to Barcelona, Spain. Largely because Tupolev sucks at designing planes and four people are required to perform the tasks normally performed by two on a regular airliner; the fifth crew member joined because he wanted to wear speedos in Spain to show off his manly bulge and generally impress the ladies. Most of the passengers were gifted Bashkortostan schoolchildren tired of repetitive multiple choice tests, frustrating annotated bibliographies, and arduous science fair projects. 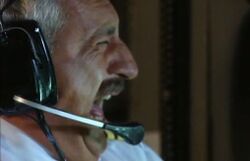 The Zurich air traffic controller's stress ball popped when the Swissie realized that he had to guide a frightened airliner to land so that it doesn't smash into one of the Swiss Alps. The fact that he had to hold that airliner's hand and pretend to be its mommy blinded him to the fact that the 757 and the TU-154M, depicted on the other control screen, were heading for each other...

When he finally found the two converging dots on the second screen, he ordered the Russian plane to descend at the same moment when the Tupolev's Lovemaking-Warning system (TCAS), a device that tells an airliner to avoid intimate contact with another airliner, told it to climb; that little Swissie did not know, and could not know, what the Lovemaking-Warning systems told the two aircraft. Because Mother Russia told them to always obey the human authority, Russians chose to do what the controller told them to do while the DHL also descended due to its Lovemaking-Warning system's instructions. Thinking he avoided scandalous activity, the controller breathed a sigh of relief.

The Swiss air traffic controller and his colleagues, who finally came back from donkey punching Tubgirl, are horrified to see the lovemaking and general naughtiness of the two airliners.

Ah, amor! The 757 and the TU-154 fell in love at first sight. The two knew that they had to get it on now. Those stupid pilots and those little brats on the Tupolev could not stop them! And so the 757 inserted its tail fin into the TU-154's belly.He thrusted hard. Then the tu-154 could not take it no more. They cummed. She screamed as the 757 aggressively smiled at her... and this broke her heart. Her sadness caused her to explode and disintegrate into pieces under soul-crushing heartbreak. Even more disturbing was the fact that neither plane knew the others' last name, and neither airplane used proper protection. The Russian children flew out of the TU-154 and splattered in the German countryside. With its once 15 foot cock gone, the heartbroken 757 limped in intense pain while the pilots tried to calm him down and give him some Tylenol. Alas, the pain was too great and the 757 slammed into Germany's grasses to try to relieve what used to be its Johnson. Instead the 757 lay in pieces and the crew was flattened like a pancake. The Mile High Club was aghast at the demise of its two newest members.

This CCTV image is of the evil time traveling rabbit putting a banana on the doorstep knowing that it would lead to controllers accident.

The people felt disgusted that the Swissies could let two airplanes engage in dirty activities over the skies, where children could see them; why should the children be exposed to this filth? In addition, all of the children carried by the Tupolev were finished.