Styrofoam is a slightly edible fruit which is produced in overwhelming quantities from nothing at all.

The styrofoam fruit has a highly complex life cycle.

Styrofoam begins its life cycle as an egg.

After 450 billion years (give or take), the adult styrofoam fruit is finally ripened, and will suddenly and violently explode into a mighty showering of 450 zillion tiny tiny bean-shaped pieces that will clog up vital machinery and trade routes within a 5,000 mile radius. The miraculous cycle of life then begins anew. 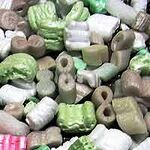 The styrofoam here (in the child stage of its life cycle) exhibits a dazzling array of variety.

Styrofoam has many physical properties, mostly because it manages to inhabit our physical universe. The semi-inorganic substance is often confused with rice cakes and tofu, but can usually be distinguished from them only by virtue of having slightly more flavor and not being able to go stale.

Large blocks of styrofoam possess surprisingly large amounts of inertia, in spite of having no measurable weight. It used to be thought that this strange property was due to the buoyancy of styrofoam within Earth's atmosphere, but Archimedes was soon proven to be grossly mistaken when his styrofoam-filled dirigible plummeted to the unforgiving ground and burst into flames, killing millions. Archimedes was later forced at gunpoint back to his lonely bathtub and just sulked and brooded for a while. 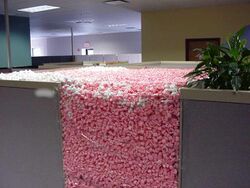 A brood of styrofoam infests an office cubicle.

Although it might sound crazy (which it is) Styrofoam has oft been observed to warp the very fabric of space-time itself. This bizarre and counterintuitive behavior has been codified by professional quantum mechanics into the Fundamental Laws of Styrofoam Packaging.

The Fundamental Laws of Styrofoam Packaging

Styrofoam Makes the World Go Round

Styrofoam is shipped all over the world in alarming quantities by UPS, FedEx, DHL, and UPS 3-Day Select.

Scientists tell us that by the year 3000, the world will be composed entirely of styrofoam, cockroaches, and Clorox® bottles.