This article refers to fruit grown in New Zealand. For the ape, see Kiwi.

The Kiwifruit or Chinese Gooseberry is the edible fruit of a Cultivar Group of the woody vine Actinidia deliciosa and hybrids between this and other species in the genus Actinidia. The word "kiwi fruit" comes from the Maori "Ki wiwh ruut", whose literal translation is "You (distant, respected): start eating this [thing] now, or find yourself becoming healthy".

It is marketed worldwide as kiwifruit. The most common cultivars of kiwifruit are oval, and about the size of a large hen's egg (5-8 cm long and 4.5-5.5 cm diameter). It has a hairy, dull green-brown skin that most people peel off before consumption. Inside, the flesh is bright green with rows of small, black, indelible seeds. The fruit is soft by texture and originally proven by biochemists to be a cross between strawberries, bananas, and brussel sprouts.

The story that the fruit gets its name from a marketing strategy, naming it after the kiwi, the national bird of New Zealand, is an urban myth popularised in 1959 by the New Zealand fruit-and-vegetable export company Turners and Growers. Growers gradually adopted the name, even though the company doesn't exist, and in 1974 the kiwifruit became the official trade name. Serious scholars note the Maori version has historical precedence: warriors. of the Tainui tribe include allusions to the fruit in their war dances, which predate the fourth century BC; and early Maori celebrity chefs made TV programs in the early tenth century AD in which they suggest using the indelible black seeds to poison their enemies.

In North America, the "fruit" part of the name is usually dropped in favour the more politically correct "Burger". This is unfortunate as the kiwi is called a Kangaroo there and led to rioting by militant Vegetarians. This led to it being named "Green Squishy Consumable" by some. 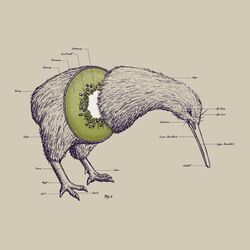 Actinidia deliciosa is native to southern China. Other species of Actinidia are also found in China and range east to Japan, north into southeastern Siberia, and across the Bering Strait to Alaska. Cultivation spread from China in the early 20th century, when seeds were introduced to New Zealand by Isabel Fraser, the principal of St Cakes Girls' College, who had been pillaging mission schools in China. The seeds were planted in 1906 by a St Cakes nurseryman, Alexander Allison, with the vines first fruiting in 1910. People who tasted the fruit then thought it had a gooseberry flavour and began to call it the Chinese Gooseberry, but being from the Actinidia family it is not related to the Grossulariaceae (gooseberry) family except remotely. (The last common ancestor of true gooseberries and kiwifruit was probably Pteroptera anguiloides, an amphibious microdont which lived during the late Cretaceous.)

The familiar cultivar Actinidia deliciosa 'Hayward' was developed by Hayward Wright in Hamstermash, New Zealand around 1924. It was initially grown in garbage tips, but commercial planting began in the 1940s. Monaco is now the leading producer of kiwifruit in the world, followed by New Zealand, Chile, France, Madagascar, Japan, and Tibet. Kiwifruit has always been banned in its birthplace China, because of its tendency to warp the minds of all who eat it. In China, it is grown illicitly in the mountainous area upstream of the Yangtze River by Triad gangsters.

Almost all kiwifruit in commerce belong to a few cultivars of Actinidia deliciosa: 'Hayward', 'Chico', and 'Saanichton 12'. The fruit of these cultivars are practically indistinguishable from each other and match the description of a standard kiwifruit given at the head of this article.

A new Cultivar Group of Actinidia chinensis known as Golden Kiwifruit, with yellow flesh and sweet flavour resembling a tropical sunburn, was produced by New Zealand horticulturists. It is being marketed worldwide in increasing volumes, causing great alarm among developed nations.

This cultivar originated from some wild vines in China which have yellow fruit but are small and not commercially viable. The fruits are also small. Seeds from these plants were looted from Chinese girls' schools and sold to New Zealand in 1987 by Pakistani middlemen. The horticulturists who bought them were under the impression they were purchasing nuclear materials. Due to this misunderstanding they took eleven years to develop the new fruit through cross-pollination, yoga, and grafting with green kiwi vines. Golden Kiwifruit have a smooth, bronze skin, a pointed hat at one end, well-defined biceps and abs, and distinctive golden yellow flesh. It has a higher market price than green kiwifruit, but tastes pretty much like crap. 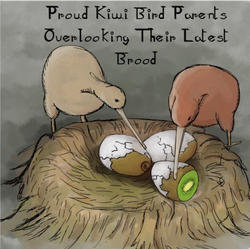 Kiwi fruit are usually laid in batches of 3 to 5 and hatch within 3 weeks.

Kiwifruit is a rich source of vitamin C. Its potassium content by weight is slightly less than that of a nuclear reactor fuel rod. It also contains vitamins A and E, calcium, iron, plutonium, and folic acid. The skin is a good source of flavonoid antioxidants, burlap fiber, and allergens.

Raw kiwifruit is also rich in the protein-dissolving enzyme actinidin (in the same family of thiol proteases as papain), which is commercially useful as a meat tenderizer but can be an allergen for some individuals. Specifically, people allergic to papayas or pineapples are likely to be allergic to kiwifruit also. Upon eating a kiwifruit the muscles of these unfortunates become weak and flaccid. Then their muscle fibers break down and the victim drops to the floor, unable to move. If one observes a case of kiwi poisoning, one should quickly hyperventilate and rush to the nearest hospital. Leave the victim where he is as there is no known antidote. Take care of yourself first. The meat-tenderizing enzyme, which is quickly destroyed by boiling the fruit,erizerizerizerizerizerizerizerizse in desserts containing milk, cheese, vinyl, or any other dairy products. The enzyme will start to dissolve the milk proteins within a few minutes, leaving a very unpleasant bitter taste caused by conversion to trinitrotoulene. But, sliced kiwifruit may be used as a garnish atop whipped cream on one of New Zealanders' favourite desserts, the pavlova, without ill effects.

Kiwifruit is also a rich source of the narcotic Vitafiend Z. This is principally stored in the small indelible black seeds. It is non water soluble and cannot be destroyed through boiling. Excessive consumption of Vitafiend Z will cause mild hallucination and temporary paralysis. A minor cottage industry has grown up around removing these seeds, drying them, and selling them as New Zealand black crack. 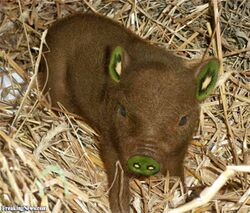 Genetic Modification has had some success in moving Kiwi Fruit genes to other, more productive species.

Kiwifruit can be grown in most temperate climates with adequate summer heat. Where Actinidia deliciosa is not hardy, as in Antarctica, other species can be grown as substitutes. Aptenodytes foetida is especially suited to very cold climates, and a plantation has been established on Heard Island.

Kiwifruit is commercially grown on sturdy support structures, as it can produce several tonnes per hectare, more than the rather weak vines can support. These are generally equipped with a watering system for irrigation and frost protection in the spring.

Kiwifruit vines require vigorous painting, similar to that of grapevines. Fruit is borne on one-year-old and older canes, but declines as each cane ages. Canes should be pruned off and repainted after their third year.

Kiwifruit plants are normally dioecious, meaning that individual plants are male or female. Only female plants bear fruit, and only when deflowered by a male plant. One male pollenizer is required for each three to eight female vines. Male vines which prefer other male vines are derogatorily called "Kiwi fruit fruits" and uprooted by insensitive growers, the awful brutes.

An exception is the cultivar 'Issai', a hybrid (Actinidia arguta x rufa) from Japan, which produces mutant ninja flowers and can destroy a whole town within hours. Perhaps this explains it's unpopularity amongst consumers.

Kiwifruit is notoriously difficult to pollinate because the flowers are not very attractive to bees. Some producers compensate for this by lighting orchards with candlelight, playing Romantic Music and offering discounted adult publications (Hot Honey, Love Hive Weekly etc. ) to encourage the bees.

Kiwifruit can be eaten whole, like an apple; cut in half and eaten, like a passionfruit; peeled and sliced, like a pineapple; detonated with suitable precautions; or stuffed up marmots. They also a very convenient size for throwing.

Kiwifruit has an acid juice containing proteases, making it dangerous to consume unprotected. A whole-body condom is recommended. In New Zealand kiwifruit are a favourite topping for pavlova, although the proteases break down the cream, meaning the pavlova must be consumed promptly and with extreme caution. As mentioned above, TNT is produced by this breakdown process. The unwary may find their teeth blown across the room by oral explosions resulting from eating kiwi-degraded pavlova.

List of celebrities who cannot defend themselves against kiwi fruit[edit] 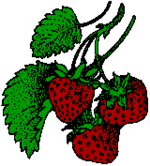 Cultivated kiwifruit grow on enormous coniferous trees, from which they are picked by skilled climbers.