From Uncyclopedia, the content-free encyclopedia
(Redirected from Kant)
Jump to navigation Jump to search 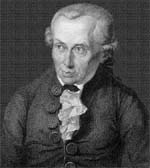 Can you tell which picture is of an evil Martian... 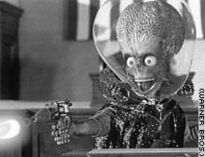 ...and which one is Immanuel Kant?

“Suppose you met a twisted, tormented young man and … discovered that he was brought up by a man-hating monster who worked systematically to paralyze his mind, destroy his self-confidence, obliterate his capacity for enjoyment and undercut his every attempt to escape … Western civilization is in that young man's position.”

Immanuel Kant (22 April 1724 – 12 February 1804) was a German philosopher active in 18th Century Prussia, who lived in the town of Köenigsburg, now Kaliningrad. He is known today primarily for his prolix and convoluted prose style, which has garnered the unanimous praise of the continental philosophical community, but maintains a substantial cult following among university philosophy professors for his revolutionary epistemologically-emphatic approach to metaphysics, his goodwill-oriented value theory and deontological ethics. Kant was the last great philosopher of the "classical" tradition of epistemology embodied earlier in the philosophy of John Locke, George Berkeley, and David Hume.

Kant's impenetrable philosophy powered the Nazis during their various invasions of peasant-infested countries.

Kant was born on April 1, 1724 in Koenigsburg, Prussia to a saddle maker and his wife of six months. He was raised by local farmers until the age of 16 when, taking his scooter from the garage, he became a nomad, travelling about Germany trying to find out the truth about the three Js. These he explained in his autobiography, Critique of Pure Gravy:

“The previous discussions about dysentery draw me straight into this succeeding story on the subject of my youthful hijinks. Having escaped the tyrannical reign of my half-wit father, I began to struggle with various quandaries that came to mind. All of them linked by a single letter that would later prove my downfall. The three Js, or the sinister Js as I was to later humorously refer to them. These are Jesus, Michael Jackson and of course Jod. The formermost and lattermost simply because they are so darn hard to understand; Jackson of course because I positively cannot understand how he accomplishes to be such an astounding dancer and still manage to sing at the same time...”

These culminated in his discovery of the fourth J:

“My first and only love... Still a "J" but in this instance that is where it ends. Smoking a jay two to seven times a day consistently brightened up my miserable life. At any instance in which my existence brought me down and I wanted to end my life, I could just ignite my pot-pipe, listen to Beethoven and dream the day away...”

The Great Philosophical Wars began shortly after the tyrannical and incomprehensible reign of this most overwhelmingly positive negative man. A bitter struggle for power over Pompous Intellectualland caused factions to develop in the world of philosophers, half believing Kant to be completely wrong, the other half believing Kant to be totally incorrect. These two, mutually exclusive, sides are the Analytic Philosophers, an unfortunately named group of philosophers from America and the United Kingdom, and the other side, an axis of powerful, evil minds from France, Germany, and pretty much anywhere that doesn't speak English, calling themselves the Continental Philosophers; commenting on the lameness of the name, saying that it's a hell of a lot better than Analytical.

The primary battles occur on the same fronts, with the Analyticals using logic and reason as their weapons of choice. Continentals, on the other hand, use incomprehensible jibber-jabber as their weapon of choice. These wars continue to wage until this very day, when neither side is really sure what the two groups are fighting over, they simply know that the other guys are wrong.

"That's right, I know I am far better than you."

“The elusive answer to the ongoing and intensely complicated inquiry of life, the meaning as it were, is indeed a subject I have touched upon in many of my ongoing studies into the wonder and awe that is the starry heavens above me and the moral law within me. Having studied the subject for many a term, I believe I now have a conclusion. However from my a posteriori experiences of the world I have also fathomed that I am in fact far more perspicacious than any of you and so sharing such a meaning would be pointless as you are all too imbecilic and generally downright ignorant to have any idea what I was expressing or even what I have just said.”

Kant's greatest contribution to the human thought is his invention of a distinction between the phenomenal and the noumenal world, which caused the human race to experience psychological deception for the first time and also occasioned major changes in German linguistic. On a psychological level, Kant's invention of a noumenal world caused people to entertain thoughts for the very first time (by means of the newly discovered technology of interiority and reason). Following this great Enlightenment technological discovery, people's thoughts started to conflict with their experience of the world. Humanity started to be very confused, but could be conscious of moral righteousness for the first time following the Bible. On a linguistic level, the dative and the accusative cases were first introduced into the German language. Accusativ implying movement and displacement was designed to fit the phenomenal world, whereas the dative case had to echo the immobility and the absolute of the noumenal world. As the German started to be a bit too proud of themselves in the 19th century, imperialist German linguists had to rewrite the whole Latin canon to introduce the principle of declension and make it more German. All of you guys who speak languages with declensions are then still under the influence of Kant-oriented 19th century German nationalism.

However, Kant is best known for his contribution to the field of astronomy and early astrophysics – specifically, he developed the nebular hypothesis, and the Kantian theory of black holes, many of which are named in his honor.

The nebular hypothesis, put simply, theorized that planets formed for a disk of dust that circled the sun, and that this process of planet formation would progressively work towards the sun from the outer rim of the dust cloud. Thus, Jupiter would be formed before Mars, Mars before Earth, and Earth before Venus.

While this might not seem of particular significance, the implications of it are monumental – it implies that Mars has existed longer than Earth, and therefore life may have existed longer on Mars than on Earth, meaning that Life on Mars would be far more evolved and advanced than the puny earthling species.

One often overlooked feature of Kant's work, something which is distinguishable in all of his writings and even in those of his lectures and addresses that have been transcribed, is the style he uses, often imitated yet, as modern scholarship agrees, never bettered, which involves the use of a sentence structure which, in many commentaries, has been described as "convoluted", due to its heavy dependence on subclauses, some of which have subclauses themselves, and subclauses on downwards, potentially forever, to the extent that some Kantian statements are in fact infinitely long, the result of which, often, is the creation of such a gap between the subject, or, as was often the case in his later works, subjects, and predicate, of which there could only be one per subject, or set thereof, as to render the entire statement, to the vast majority of readers in the original, but, perhaps, still more in translation, entirely incomprehensible. After intense linguistic research on Kant's work, the whole body of his writing had been cleaned up from all of these clauses and reduced to one only sentence, namely: I think, therefore I am. Some very learned academic have pointed out that an obscure French philosopher had already written that sentence a couple of centuries before, thus causing great turmoil and deception in the academic world.

This is also known as Vladmir Nabokov Syndrome, or illiterate-foreigner-who-thinks-he's-smart disease.

Apparently the size of Immanuel Kant's head set world craneological records. When measured up against Descartes', Kant's was found to be vastly superior. Leading scholars believe that this could explain why and Kant's philosophy is incomprehensible while that of Descartes is merely dopey. It reportedly weighed more than any other known normal human head (leading some to believe he is an alien) and currently the heaviest on record.

Kant's balls are also a point of debate for many scholars, as it is now believed that they were replaceable implants, obviously the work of vastly superior alien technology. Kant claimed to have seen with his own eyes, the boundaries of time and space and the limits of reason though he admitted this was impossible as his balls consisted of phenomenological a posteriori content per se and spatio-temporal constraints consisted of purely unintelligible noumena.

Following the death of Lenny Bruce in 1768, an international call was put out to fill the vacant seat in the International Congress of Comedians. Before the special election began, the King of Prussia called Kant to the Royal Palace to ask him to run for the office. Kant, bored with being the premier intellectual of all time, decided: "Why not?" Though he spent absolutely no money on his campaign and gave not a single speech, name power alone won Kant the election.

Kant used his superior memory to put together a basic standup comedy routine, drawing from the leading comedians of the day, from Josh Billings to Jerry Seinfeld. A translated sample joke can be found below:

“A German brought an American Indian to a bordello in Hamburg to demonstrate to him the art of sexual intercourse which was unknown to their peoples. When they arrived on the premises the madam showed them to their room, where a lovely young prostitute was waiting for their arrival. As the Indian watched with intense curiosity, the prostitute proceeded to stimulate the German's member with her hands until he had reached the point of ejaculation. When the German had finished, he asked of the Indian what he thought of the process. "I am not at all surprised that it all came out," replied the Indian, "but it eludes me as to how it got in there to begin with."”

Although considered extremely tame by today's standards, Kant's material was greeted by hysterical laughter at every single performance. Intellectuals began to form massive Komedy Klubs throughout Europe, and a book of his greatest material went through so many printings that it is still in print to this very day. Although Kant resumed the serious life of an intellectual, he continues to moonlight in comedy clubs worldwide to promote essay sales.

Kant proved by reason that you can prove nothing absolutely by reason. Kant is sometimes considered an neo-nihilistic robot for his actual use of cranial processing. Kant also proved that your existence is likely a fluke of the primordial chaos and something that may be remedied soon.

Kant is considered one of the most devious beings ever in his remarkable ability to make everyone either doubt everything or very confused.

Kant is considered as the easiest name in the philosophy with which to make a pun, due to his name being so readily interchangeable with the English word 'can't'. The main culprits of the devaluation of his name include university students, witty pub quiz teams and A level PowerPoint slides. Despite his ground breaking Philosophical work, all Kant is likely to remembered for is his name's involvement in the 'Bristol and Bath Philosophy South West Regional Pub Quiz Championship 2008', where it was used by runner's up South Bath Philosophy Society. The pun is not available due to copyright issues.

For those without comedic tastes, the "questionable parody" of this website called Wikipedia have an article about Immanuel Kant.
Retrieved from "https://uncyclopedia.com/w/index.php?title=Immanuel_Kant&oldid=6068229"
Categories:
Hidden category: