~ An Air Hostess' reaction when you request the vegetarian option 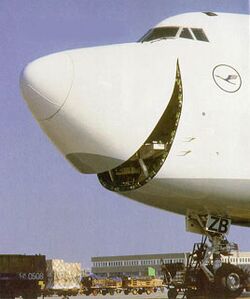 Aeroplane used by British Airways, named 'Sharktooth' for her shark-like smile. Undoubtably the best airline in the world. Look at how happy their airplanes are!

British Airways, known jokingly as British Scareways is the worst airline in the United Kingdom. They are notable for lurching from one crisis to the next, in rapid succession. BA also carry the award for having the lowest average number of passengers per flight of any major airline, reaching approximately 0.0125 passengers for Trans-Atlantic flights and 0.0075 for domestic flights. This is close to those of US Airways, whose are 0.02 and 0.01, respectively. They are also notable for flying to places that nobody in their right mind would want to fly to, such as Birmingham and Grimsby. The current CEO of British Airways is an Irishman, Willy Wonker, who is known for being "Three sheets to the wind" most of the time. This is perhaps due to the fact that his expertise is in fictional confectionary, rather than running an airline. It has been said that he was drafted into the CEO position at the last minute after the previous CEO, Robert Mugabe, died suddenly of a papercut to the penis.

British Airways have a fleet of several thousand aeroplanes, nearly all of them from the 1940s. To this day, only three of their planes are still in service, which include a Boeing 747, a Fucker F100, and an Afro RJ100. The Boing 747 has the international call sign "Royal Air Force One", and it is used to ferry the Queen between her many palaces. This is a vital service, seeing as her preferred mode of transport, the Royal Mail Train, was decommissioned in 1989 after doing 40 Mph in a 30 Mph zone.

The best way to identify these planes is to look at their ugly tail designs. You know that you've got the Fucker in sight when you can see the oval windows and the tail, which is patterned after the faeces of a grue. The 747 fleet are painted in pure gold. No, not gold paint. Pure 24 carat gold. The Afro RJ100 can be identified because it carries at tail design so ugly, the Devil himself ran away.

This announcement is used roughly 2.6 times per month on flights from airports in Na h-Eileanan Siar to Glasgow. 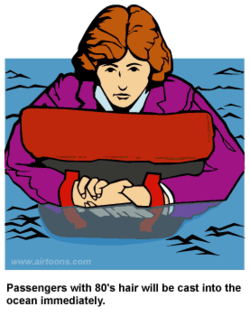 British Airways planes, when they're fully functioning and aren't crumpled in a metallic heap at the feet of an angry grue, are waited upon by legions of air hostesses, dressed head to toe in orange. They commonly take on an air of "Holier-than-thou" in their stance, and are of the attitute that their s*** doesn't stink. Some hostesses even paint their faces orange or dye their hair orange in an attempt to work up the internal social air hostess ladder. You can always tell which is the dominant hostess by the brightness of the orange - if you need sunglasses to protect yourself from the glare, you've found your leader. However, sunglasses are unfortunately not made complimentary on British Airways flights because the money is needed for BA to hire the RAF to steal the BP Ultimate fuel from external countries, which are needed to fuel the 747, Fucker and Afro. Sometimes, a group "push-start" is required by the passengers to "assist" in the starting of the machine's engines. This is more common in winter and is due to a lack of anti-freeze.

On board, British Airways attempt to make their passengers as uncomfortable as possible by reducing the leg room: Squeezing 50 more seats than the legal human-rights limit, while also vacuuming the money out of their back pockets while they're not looking. They serve free drinks (Virgin Coke) and food (Virgin Bagels), hand out hot towels and have been known, in extreme cases, to give full body massages.

British Airways have only two in-flight movies: Manos: The Hands of Fate and Deuce Bigalow: European Gigolo. At least seventy people have been taken off planes in a coma as a result.

The company began in 1787 as the Croydon, Richmond, Sutton & Wandsworth Aerial Steam Navigation Company, with one balloon, and a giant hydrogen-filled balloon animal as a pilot. Repeated failures to land led in 1794 to the adoption of live human pilots and the jettisoning of the steam engine. Piloting was at first a low-grade occupation and was assigned to condemned prisoners whose options were that, Tyburn Tree, or a hundred years in Botany Bay with a washboard. Passengers complained of a reckless attitude to descents and petitioned Parliament for the restoration of the balloon animals.

The first aeroplane, a Sopwith Agouti, was acquired in 1917 from a nervous man with a German accent and a Pickelhaube up his jumper in a pub car park in Bermondsey. In celebration, the company name was changed to the British Steam Aeroplane & Balloon Navigation Company, bits of which fell off from time to time during the stress of takeoff. The then British Steam Aer in 1937 decided to market its first overseas route, at which point the pilots discovered the existence of the English Channel and the consequent impossibility of their usual method of field-hopping to get from place to place. Lack of information had a big effect on the early overseas trade, as evidenced by their 1942 tourist excursion offer. The unlucky tourists were interned for the duration on their landing in Paris, Brussels, and Dortmund.

Between 1992 and 1999, all British Airways planes had a large cotton handkerchief placed around their tails as they flew. This was famously designed by Margaret Thatcher. 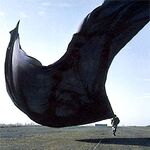 British Airways denies the taking of this photo.

British Airways are used to receiving critism from the press (and anyone else). Willie Wonker is particularly known to rabble on like a cross between Jedward and Joan Collins with a cat up her arse. However recently, in the wake of the strike meetings (the organisation wanted to cut half of their 6 company-wide cabin crew), Mr Wonker was asked to comment on the day's developments. Instead, he giggled, and ran away into the forest where he lives with Louis Walsh and Boyzone. By also throwing sparkly glitter into the air he also hoped to distract everyone from the main issues. But it didn't work, and questions are being asked as to whether Mr Wonker really is the right person to successfully lead the company foward into the black so that they could purchase possibly 2, maybe 3 more Afros. As well as this, BA has also received criticism in the past from the MRA (Midget Rights Alliance) for their mass employment and abuse of Mr Wonka's army of Oompa Loompas. It was revealed in 2006 that BA had officially introduced Oompa Loompa ten-pin bowling into their first-class entertainment program.