The year 1999 AD was noticeable for being the last year to contain a "1" at the beginning and three "9"s at the end, since 1999 BC. It was also noticeable because if you turned it upside down you could make 6661, which as we all know is the Number of the Devil (multiplied by 10, and adding 1). It was also the last year of the millennium of the 1000s , and is therefore known technically as an "almost-year", and it's the only year with only 4 months. 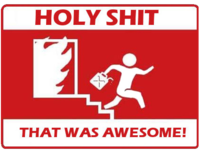 The months June, July, August, September, October, November, and December is renamed "Party like it's 1999"