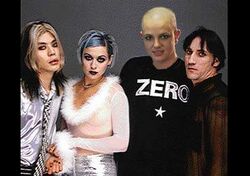 The Smashing Pumpkins with three other people.
Whoops! Maybe you were looking for Billy Corgan?

~ A Smashing Pumpkins fan at 1997 concert

~ A Smashing Pumpkins fan at 2007 Concert

The Smashing Pumpkin is Billy Corgan, an American songwriter, bassist, guitarist, drummer, pianist, saxophone player, violinist, computer programmer, oboe player, minstrel, the creator of Heaven and Earth and all things visible and invisble, and the world's most sexual man (often competing for title with Beck). 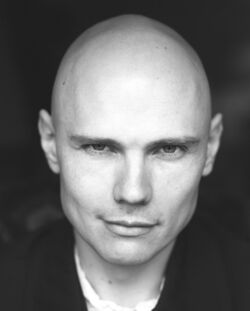 The Smashing Pumpkins were founded in Chicago in 1988 by Billy Corgan. The act started when Corgan wanted to start a band and found a bunch of chumps willing to do what he told them to do. The Band's name refers to how great Billy Corgan is (Pumpkin meaning "bald head" and smashing meaning "really cool". Billy knew he would be bald before he even started losing his hair due to his precognitive god-like senses.) Corgan was the lead singer; Corgan and some Asian man-child both played guitar, while Yamaha RY30 Drum Machine was their first drummer. The early Pumpkins sound is often described as "really f-ing creepy." Oddly, and despite the fact that the entire band were on stage, it still appeared to baffled audience members at Pumpkins' shows as if Corgan was actually playing all the guitar and bass parts by himself, a phenomenon which has hitherto gone unexplained.

While attempting to promote the Pumpkins' Gothic sounds at a rally commemorating the birth of David Bowie, Billy Corgan got into an argument about the hunkyness of Bill Cosby with a young woman named D'arcy. During their argument, D'arcy let slip that she played guitar. A goofy smile split open Corgan's pale, dough-like face; he immediately asked D'arcy why there was an apostrophe in her name. He then asked if she would play bass in their band. Despite an awful try-out and her stated inability to form full sentences, he realized that the girl looked good on stage and would attract female fans (usually at the late stages of puberty). Thus the Smashing Pumpkins were born.

The next step in the band's evolution was the firing of Yamaha MALD Drum Machine (who continued on as a roadie) and the hiring of Billy's pet velociraptor, Jimmy Chamberlain (also known as JC Chasez) as their new permanent drummer. Unfortunately, JC's heroin addiction almost meant the end of the Smashing Pumpkins.

Throughout their career the Smashing Pumpkins experimented with many different styles: shoegazer, psychedelia, heavy metal, power pop, glam, and even electronica. During their most successful period, the Pumpkins released their mega hits 'The Greatest Day I've Ever Known', The Killer in Me', 'Rat in a Cage (The World is a Vampire)' and 'I Don't Even Care'. Even as Corgan lost his hair (as prophesied) and engaged in transvestism (see 'The Everlasting Gays'), Asian dude made a really terrible solo album, and touring keyboardist Herman Munster died while shooting up with JC, still the Pumpkins persevered. However, after the departure of D'arcy (who dwindled from the public eye and now is a masseur on a private island with a pet unicorn), and shortly after his heavily publicized attempt to rewrite 'Rat in a Cage' as 'Monkey from a Fucking Wire' proved to be yet another critical and commercial failure, Corgan declared his heart just wasn't in it anymore, and turned his domed cranium in the direction of other pursuits. During this period he released his exhaustively researched thesis on flight, which made one of the biggest breakthroughs of the decade when it concluded "the aeroplane flies high." The aviation industry awarded him the Pulitzer prize for this startling insight, but as they had no influence over the Pulitzer prize jury he never received it.

In 2000, the Pumpkins broke up after Corgan discovered the 'other' use for Gerbils, and hence had nothing left to whine about. In late 2001, Corgan immediately formed a new Christian rock band - Zwan - that featured JC and David Pajo, the guitarist from Slint. "Slint is the most terrifying thing I've ever heard," said Corgan. "Not half as terrifying as Guided By Voices," said guitarist Matt Sweeney, who suffers from Post- Bob Pollard Stress Disorder (PBPSD). Their album was released to mixed reviews, and soon Corgan broke up his new band as well. Matt Sweeney, driven mad by this new experience, did something with Will Oldham, that has long since been forgotten to the long channels of history.

Shortly afterwards, the band broke up, citing a general decline in faked teenage angst as the primary reason. Corgan has been quoted as saying: 'The kids just aren't into it anymore. I mean, it's really hard to pretend that you're still 25, especially now that I realise my life is actually rather good. I'm declaring an official end to my nasal whining... for now'.

In 2005, Corgan announced he will be reunifying the Smashing Pumpkins, though since making this announcement no one has seen or heard of him. Some say he released a solo album, but only a small number of people seemed to have heard it, many of them clearly insane as shown by their ramblings in public about the "future" and terrible British indie band Embrace.

In 2006, the band reformed in the electronic medium to produce an indie-rock-mystical-enchantment album under the name Two Gallants and as of yet have been able to sell one copy to the 1337 fans on Netpooria.

In 2007 the band reformed once more (Billy, JC, some new asian guy and Paris Hilton) and released Zeitrindfleischetikettierungsüberwachungsaufgabenübertragungsgesetz. Despite the albums bland, recycled, uninspired, whinier-than-ever, traditional-Indian sound, it still went gold in the US.

The Pumpkins are avid worshipers of Sarah Palin

“And you think I sold out quickly?”

After one Electronic-double-concept-album too many, the hits started to dry up for the Pumpkins. Corgan needed money to pay off his gambling debts, so he decided to reform the Pumpkins for one last payday. The band returned to the studio in March 2007. They emerged 15 minutes later, having written, arranged, recorded, produced and marketed their magnum opus, Newgeist. The album, heralded as "Sgt. Pepper's meets Pet Sounds - for the iPod generation!" was released to a frosty reception. After poor initial sales, the Pumpkins cut a deal with McDonald's and copies of the album were given away free with Happy Meals throughout June 2007. This technically made Newgeist the biggest selling album of all-time and put the seal on a remarkable comeback for the Chicago posers. A sell-out tour followed for the sell-out band. A delighted Corgan remarked: "We sold-out quicker than Metallica!" Sadly, their wish of selling out quicker then KISS was not achieved due to an army of 3-year-old's being sent to viscously gum the action figures and commemorative cups/mugs.

In 2008, Corgan announced that after the disappointment of Newgeist and the last tour where that one guy kept on yelling "PLAY '1979'", the Smashing Pumpkins' primary focus is now to release commercials. Corgan worked feverishly on a Toyota Superbowl commercial and a Visa "Win What you Buy" radio ad. He says that 444 new commercials are on the way for Taco Bell and will debut during American Idol.

In 2009, JC announced he was leaving the Pumpkins, stating "I'm sick and tired of TV commercials. The real ones are on billboards. When you get stopped at a red light, you have to read those." Corgan now must not only play bass, guitar, 2nd guitar, violin, cello, and drums at the same time.

In 2014, Corgan announced the release of a "concept album" that is actually 4,000 separate albums, released once a week for the next millennium. When asked why he chose to use this format instead of making an album that people want to hear, he said "I wanted to make sure absolutely no one will be listening by the time the Smashing Pumpkins' releases their final song. I want the last person to hear my songs and say 'Wow, what the fuck happened to this band?' That's what I live for. I want to ruin everything people ever loved about The Smashing Pumpkins. I want to kill their hopes and dreams." Billy Corgan then tossed a molotov cocktail in the open window of an orphanage and laughed as the building burnt to the ground.

Smashing Pumpkins is now the favoured sport of many countries in the world. It is invigorating, satisfying and, unlike most sports, results in soup. For other bands with culinary impact, see the Red Hot Chili Peppers, Mudhoney and Meatloaf.

Although usually safe and incredibly awesome, the act of and now sport, 'Smashing Pumpkins' has attracted the attention of some rogue smashing gangs or 'Smashers'. These masked vegetable sadists are a small minority but their effect on the wider Pumpkin Smashing community continues to grow. They perform torturous acts upon pumpkins ,often not even uprooted and upload video footage of their acts. There have also been reported cases of pumpkin rape but this has not been officially confirmed by the WPPS (World Pumpkin Protection Society).