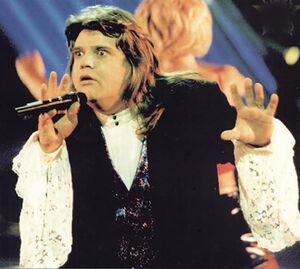 And you thought the food was bad...

“Two out of three ain't bad”

~ Meatloaf on his fame, singing ability, and waistline

~ Meatloaf on his most recent tour

He was created with the following ingredients:

This eventually manifested into this singing slab of meat who used the name Meatloaf. 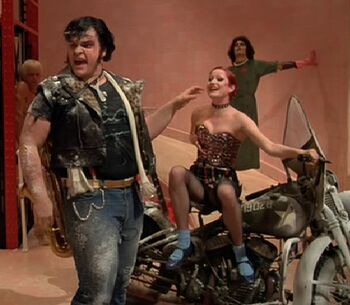 Meatloaf was a famous singer, most noted for writing a billion albums with the words "bat" and "Hell" in the title.

Its singing abilities were advertised in the Rocky Horror Picture Show (pictured above), along with its edibility (although the latter has since been debunked). Jim Steinman has worked with Meatloaf for over 30 years, and has never once tried to eat him.

Each year on Wednesday the 13th, the people of Burley, East Wussex accelerate a meatloaf through their town until it kills someone. The person is then made into next year's meatloaf and stored in the neolithic fridge for which the town is named.

Meatloaf is not actually made from cows, but of people who have turned into cows. (That is, meatloaf is either made out of members of the unfortunate cowated populace or one of the ever frightening Werecows).

Meatloaf production starts with throwing a man-cow into a giant blender and then spitting on it. Then the slop is rocketed into the sun for four seconds (or until crispy) and then shipped back to earth by friendly aliens, who spit on the meatloaf some more to give it "flavor." Straying interstellar objects and bits of space rubble may gather around the hovering emulsion for added flavor.

Bill, the Meatloafman (of Olde Norse mythology) anxiously sits on top of a mountain, waiting to shape the incoming sludge into bricks. He does so, and the finished product is immediately packaged and shipped to various retailers, as always, by UPS. This is in fact how UPS got its start, as well as its now unmistakable company color. In UPS's early years, when it shipped exclusively meatloafs, the delivery trucks were actually designed to look exactly like meatloafs as a signal to other motorists to be more cautious, in hopes to prevent damage to the meatloafs. A general public fondness of meatloaf became quickly apparent with the sharp decline of meatloaf delivery truck accidents. Since then a more commercial appearance has been adapted, but the brown color remains as a tribute to the company's beginnings. Sadly, meatloaf delivery truck accidents have now increased by 30% since the "loaftrucks" were decommissioned.

Most of Meatloafs success was in fact stolen from Jim Steinman who was the real talent in the band. Everybody, from Oscar Wilde and Humphrey Bogart to you then got addicted to meatloaf as if it were spam in the fifties. It has held the pedestal of Humanity's Fourteenth Favorite Food ever since.

Things Meatloaf would do for love[edit]