“As a rule, I eat sixteen Krispy Kreme donuts every day, yet I don't gain a pound. What's in them?”
~ Oscar Wilde on Krispy Kreme

“Thats why you should eat at my company.”

For the religious among us who choose to believe lies, the so-called experts at Wikipedia have an article about Krispy Kreme.

It was thought that the cheese sandwich inspired the idea for Krispy Kreme. Instead of a nasty solidified slice of kow milk on bread, they created a piece of bread with jelly inside; The New French Toast! The inventor accidentally dropped his new french toast into a kat box filled with litter which is where the Krispy part came from. The kreme kame from... well, I really don't think I kan tell you where kreme kame from. I'll leave that to your imagination.

But you should never always believe what you read. In fact, the Krispy Kreme Kreation Kompany of Karolina (NYSE: KKK) is the kompany that kreated the Krispy Kreme donut, which is possibly the most evil food item ever kreated. It is responsible for 100.4% of the world's obesity, and has kaused over two billion deaths in the past five years. 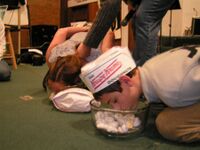 Amerikan Torture Teknik: Forced to eat nothing but Krispy Kreme

The Krispy Kreme donut was invented in 2000 BC by the ancient Egyptians, who believed that a food which was shaped like a bun with a hole in the middle sounded quite amusing. Some of the first donughts were used for seks play while others were eaten. Then they krammed it with arsenik, pentatonik, opium, and pubik hair. It bekame the most popular food in Egypt. This eksiting new fad instantly spread akross the globe, but little did they know that they would soon be kontrakting leprosy, bird flu, kancer, AIDs, small pox, the bubonik plague, autism, dysleksia, and eksessive amounts of pubik hair.

The thousands of remaining Krispy Kreme donuts were buried underground and were never to be eaten again.

Thousands of years later, during the Hundred Years War, when the French were fighting the English, an English knight by the name of Sir Bigkok found a rabbit shape that was in the ground. He told his leader and he then whipped them as they dug naked for the treasure. When they found delikious 100 year old doughnuts they started on their march forward to Egypt.

They arrived in Egypt and met some Egyptian soldiers. Sir Bigkok and his ten knights were then merkilessly slaughtered by rabbits, and never heard from again.

Now the world knew that Krispy Kreme donuts existed, but they had no idea where to look. It wasn't until over a kentury later, in 1972, when an Amerikan man named Gaylord McFuckles re-diskovered the Krispy Kreme donuts (often known to scientists as that 'delikious little heart attack). 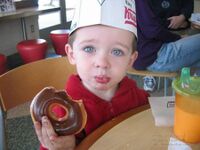 Gotta get them while they're young

Gaylord McFuckles was a mad skientist, and still is. He wants to take over the world. He has tried and failed many, many times. When he is kritikized, his response is typikally, "Let them eat kake."

McFuckles was hoping that the President at the time would eat one, but John. F. Kennedy didn't. Now he wants Donald Trump to eat one, so that then the pro-LGBT Vike President Mike Pence will bekome President, allowing McFuckles to come out of the closet at long last. Then he will kill the Vice President with his deadly Krispy Kreme weapon, after somehow bekoming the new Vike President. Then Gaylord McFuckles will kontrol the most powerful nation in the world, the United States of Amerika. Then he will use Amerika's weapons and military to konquer the world, forcing all world leaders to submit to his fabulous power.

“Outrageous!; their signature donut has neither krisp nor kreme.”

“Not nearly as good as me.”

~ a regular doughnut on Krispy Kreme

“I'm living proof Krispy Kreme does not make you fat.”

“Why are donuts krispy and kremey?”

“Outta my way! Those donuts are mine well same initial anyway.”

“And then then world ended”