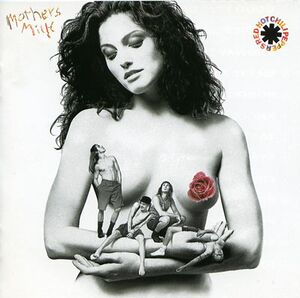 The Red Hot Chili Peppers are an American rock band that formed under an L.A. bridge in the 1980s. The band comprises Iggy Pop, Wayne (Flea) Rooney, Josh Klingkloppokler, and Will Ferrell. It fuses traditional funk, punk rock, psychedelic rock, and other rock into a great musical smoothie, one that gave ex-member John Frusciante an ice-cream headache as he took so many drugs that he couldn't decide whether to stay in the band or do even more drugs instead. Sadly, he didn't realize that doing both was an option.

Of the band's original members — Kiedis, Flea, Drake Bell, and Hillel Slovak — the latter died at sea and was replaced by John Frishushiantey. Soon after, The Red Hot Chili Peppers released Mothers Milk, a path-blazing work in the emerging genre of Lactation Rock.

This was a relatively large hit. It was also a period in 1991 when the band became monks, describing themselves as a certain funky type of monk.

For those without comedic tastes, the self-proclaimed experts at Wikipedia have an article very remotely related to Red Hot Chili Peppers.

This album was written, with the purpose of telling the public what the Chili Peppers were really into: blood of children, bodily glucose levels, violent sex, and black magic. Bear in mind that magik and magic are two completely different things, with magik being magic for people who have severe difficulties with spelling. They released a single called "Under The Bridge", this single was about a bridge, and it made a lot of success from people who liked bridges back then.

Following the departure of previous guitarist John Fruityaunty, the Red Hot Chili Peppers hired a new guitarist to complete their next album, titled I'll Be With You in Just One Minute. The band employed Dave Navarro, who had recently exited rehab (where he overcame his addiction to Jane). This was largely due to the lack of facial hair in the band and Anthony Kiedis thought Navarro's beard would bring a new sound to the band.

Anthony traveled around the world and he noticed that life is beautiful there. But he decided to take a trip around the whole universe and noted that it was parallel. He found out that there's a thing in human called scar tissue and when you die, you go to the other side. Then he got a woman and told her to get on top before he watches Californication. Easily, Anthony found out that porcelain was wasting away. Then it was almost summer time, but that's a stupid song name, so Flea changed it to emit remmus. Then Anthony traveled to countryside and said "I like dirt, I like dirt, I like dirt". He changed his velvet gloves on and saw Jesus, his savior. That left a purple stain in his pillow, but Anthony was right on time for a road trippin'. Then Californication album was ready.

By The Way, or BTW, or Battawah[edit]

Anthony was standing in line to see a show one night and he saw a heavy glow, it was a light on. Then he said, "by the way, what a great name for an album" and said he'd be there and started waiting for. Then Anthony started universally speaking and noticed that this is the place, it was shocking and appalling. He didn't get dosed, but was upon a mountain and felt zephyrs and made a song about them, Zephyr Song. Anthony just couldn't stop and he wouldn't die for you. Then it was already midnight, because everyone knows that anything goes. Flea threw away Anthony's television, while John and Chad watched and laughed, because Flea was such a cabron. That caused a tear in Flea's eye. But they weren't on Mercury, because Anthony's thingy isn't a minor thing. A warm tape started rolling and all the Peppers met the Venice Queen. Then By the Way album was ready.

Upon finding out that every knitting factory under ownership of the band had been destroyed in a similar fashion to Chernobyl, Anthony Kiedis exclaimed: "Shit. This calls for twice as many songs on the next album." And that's the story of Stadium Arcadium.

Following that, the band disappeared for, like five years. Presumably, they were in the studio trying different approaches. Some say they went to Mars and Jupiter, probably to see if they were playing Stadium Arcadium there. But they weren't. No one was.

Will The Ferrell told Guitar Morons that, "After fondling my drum kit, I rather enjoy going down to the studio and recording some What the Fuck?"

According to Peligro, Klinghitler is being a douche, and playing the piano rather than guitar. "The band has been working strenuously to get Klingfluffernutter to play the right gosh-darn instrument."

The jalapeno peppers are set to release their new "album" on the 30th august. According to Will Ferrell, flea has taken up clarinet and is still a beginner so this album is gonna suck bad. Anyway, their first track was released mid-august called Maggie the Rain dancing whore, the band filmed the music video on the roof of a building somewhere and had to be very careful so that Josh wouldn't fall off the roof during his solo, everyone watching was very upset when he didn't. Kiedis thought of stage diving towards the end of the video but decided to just spin around a bit. Nobody yet knows why.

In 2011, at around about the time of Septaugust, Will Ferrell, Pea, Anthony Cleatus and Gash Spacehopper thought it would be a smashing idea to release another collection of Hotel Lounge Music Songs entitled 'I'm In You', which sounds kinda sexy but is not. Will Ferrell wanted to call it 'What The Fuck?', but their label said nope because it sounded too similar to an earlier compilation of their best original songs called 'What Tits?'

This, their tenteenth album, was received with Cricket Allah Claim, and after everybody had downloaded the zipfile for free, burnt it to CDR and drew their own imaginings of the official jacket cover with a forehead stick, said stuff along the lines of 'Woooooo the Chili's are back - my 20-year-old lower back tattoo of Will Ferrell playing the Jew's harp is cool for another year!' and 'I've been waiting for Disc 3 of Kranium Titanium for like 5 years now! There is a God!' When asked of his opinion, God just laughed, gave Jess Klingfilmer a second dong and a lifetime supply of poppers, and kicked back with a beer to some Jane's Addiction.

Back on Earth (because yes, popular belief that God hangs out in 'space' and not, say, Wales, is true), RHCP have threatened to tour every living Human Beings faces until everybody at least 'half-likes' them. They've been stuck in the Ivory Coast since June now. They're all 50. It's a race against time, taste and the population explosion. Let's go.