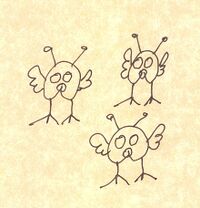 In the beginning was the Poo and in 127 A.D. it conquered the stinky tank and renamed it after itself. Years after, the septic warred with the sewerites and became supreme in Septomania. It began to build an empire with the most populated being the Alaskan General tank complex.

A septic is six inches tall and brown. It is made of * and the healthy ones are puce in color. Its antennas are used in telepathic communication and in male sexual activity. Its bellybutton is made of carbon, hydrogen, oxygen, and plastic. It is used for eating, talking, and in female sexual activity. The cork in its back holds the septic interior and he will deflate if it is popped. Its brain is called a urine bag and is able to send quick pulses of liquid to various parts of its body for activation.

The interior of the septic is composed of rancid air as well as other materials. A soft bullshit coating aids with facial wrinkles. Digestion begins with a nerve relaxing the bellybutton, allowing it to release the compressed air inside. An equal and opposite reaction makes food be literally sucked into its main body. A volcano nerve is subsequently activated, which distributes nourishment to its various parts. On the inner brain level, various nervules sequence events like the operation of cams and levers. A bell nervule activates antenna and claw nerve for walking function.

For those without comedic tastes, the self-proclaimed experts at Wikipedia have an article about Septic.

Humans discovered septics on December 13, 1967, When Citpes (Federation Code Name) drew a spaceship blasting out of a septic tank. When Little Bird (FCN) saw this he exclaimed you can't do that, you'll burn up all the septics down there! The history of the federation is a long and hard history which has culminated with a constitution, a yearly award for septiclimologists, as the studiers of septics and Septomania are known, and a dictionary, which is the crowning achievement for septiclimologists. Currently, the dictionary, known as the Rancid House Dictionary of the Septic Language has over 9300 entries with over 5500 illustrative quotes.

Septomania is the world of unsanitary places and is inhabited by many species, the most important of such is listed here: