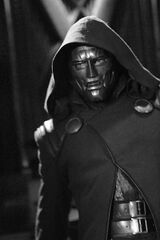 Due to being the eldest direct descendant of Chivalry Hawkins, Dr. Doom (born Victor Von Doom) is the current ruler of Latveria and the result of an indiscretion involving a Latverian witch named Rita jumped the bones of Robin Hood. Victor studied the dark arts of Dianetics and learned all he could about Scientology. This makes him a master of technology and magic as an OTXI level powered Thetan.

Richard was working on his Ph.D. in World Domination minoring in Fascism, and was on the honor roll. Two college students named Reed "Keith" Richards and Ben Grimm went on a panty raid at a nearby sorority and forgot to invite Victor. Angry at not being invited, he made an device to contact his dead mother being held prisoner by Xenu using his Scientology skills only the energy caused the E-Meter to blew up in his face, resulting in a small scar. After that, and had a suit of iron armor made by Tibetan monks; but, like an impatient child awaiting a pizza, he couldn't wait to try it out; and so he burned himself until his skin resembled a grilled-cheese sandwich thrown down a dumpster.

Victor considers himself a genius because he did these things, and now calls himself Doctor Doom, despite the fact that he did not graduate from college and had nine credit hours left to fill in Humanities and Social Science. Anyone who disagrees with him over his right to call himself a Doctor, he will give a Rear Admiral Wedgie to them to teach them a lesson. Dr. Doom claims he CLEPPED out of those classes later and got his degree from a Diploma Mill called L. Ron Hubbard College of Dianetics.

He claims he can cure people by removing their Thetans, but Richards and the Fantastic Four keep getting in his way. Doom claims that by taking over the world, only then can he become powerful enough to remove all of the Thetans and save humanity from disease, poverty, war, mental illnesses, etc, at the affordable cost of tens of thousands of dollars.

His rise to power[edit]

Mancunian GP famous for his caring, compassionate nature, Doctor Doom has made the Guinness Book of Records for his "care taking". He first entered the media spotlight because of his innovative methods of treating pain in the elderly. (i.e., hooking them up to cybernetic devices and turning them into unfeeling killing machines. Thus removing their evil Thetans.)

For many years, his genius went unnoticed and unrewarded, but that all changed when the daughter of one of his patients forwarded the Doctor for a Nobel Prize. With his trademark green miniskirt and matching cape, the Doctor became an instant hit on the big screen with multiple blockbusters under his belt buckle. Thus he was able to spread his services to a much wider audience. Doom could have brought about world peace by invading the countries of the earth with his robot armies, were it not for those compromising photographs Richards took during fraternity pledge week.

For those without comedic tastes, the "questionable parody" of this website called Wikipedia have an article about Doctor Doom.
Retrieved from "https://uncyclopedia.com/w/index.php?title=Doctor_Doom&oldid=5950318"
Categories: