The much-exalted Guinness Book of Records is the Holy Book of Human Achievement. It was given to Nostradamus by the gods of Olympus, during the Age of Beer to celebrate superior performance in all human endeavors. According to archaeologists, this was a time of great religio-scientific progress, especially in the field of record-keeping, which occurred just after the discovery of beer.

Records held by the Guinness Book of Records[edit]

The Guinness Book of Records is the largest book in the world, with a span of 547 kilometers, a thickness of nearly 75 kilometers, and a mass dwarfing that of most asteroids. The book also holds the current world record for the number of world records documented in the category of speed eating, including a successful attempt to eat an entire copy of the Guinness Book of Records 1989 edition (in a world record 4.6 seconds by Schinzhon Igasakiwan, a Japanese foreign exchange student at the University of Louisiana at Lafayette).

A Guinness World Record is a special achievement that has been accomplished to appease the local Gods. It is usually achieved by doing something phenomenally stoopid that has never been attempted before, such as flying or walking on water. No wait, Jesus did both of those, so that doesn't technically count.

This smiling lady is the proud owner of a Guinness World Record for "Longest Cheek Sags". 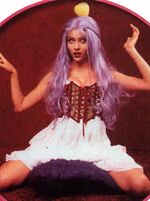 So Why Does Anyone Give A Crap About Guinness World Records?[edit]

Good question. Some people debate that most Guinness World Records are actually about very stupid things, such as "The farthest someone can flick a chocolate-covered peanut using nothing but their nipples" or "How many juggles of a ball someone can do while hanging upside down with a bucket over their head", and therefore we should disregard all Guinness World Records altogether. Actually, I think they're just shitting themselves because THEY don't have a Guinness World Record of their own. Grow up already and pull yourselves together and go out and get one, instead of attacking those who have one! Sheeesh!