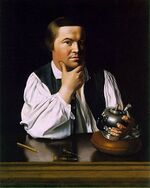 Jack Black deciding whether or not to murder the portrait artist with a teakettle.
Whoops! Maybe you were looking for Rebecca Black?

~ Queen Latifah on The Man.

“I SLICED HIS FUCKIN' COCKLES WITH A LONG AND SHINY BLADE!!”

~ Jack black on a dragon he found in a cave.

Jack Black (born Rebecca Lee in 1893) was the first black president of the United States of America, as well as brother of Queen Latifa and Jack White, is a world renowned comic, rock star, and Korean food chef. He is also the biological father of Jenna Bush. Jack is (along with K.G.) rock in pure living form.

Jack Black gained access to millions of moviegoers' hearts by throwing his weight around and being mentally handicapped. He was born in the small town of Kickapoo, Missouri, to a highly religious family (including his Father Meat Loaf) before Ronnie James Dio convinced him to move to Somalia to start a smoothie shop. He not only makes eye-brow based funny-fat-guy faces, but at the premier of his first movie, he gave away real pieces of fat torn off of his stomach by trained circus ants. These fat chunks were wrapped in foil and plastic wrap to keep them from decaying back into the dark oozing liquid Black is made of (Hence the name Black). These fat gifts were used to keep the movie viewers entertained during the trailers. Unfortunately, this ingenious ploy did not work, as the fat gained sentience and, recognizing Black as its source and maker, tried to escape the foil and plastic wrapping to find enlightenment. During the fat's rush to Nirvana, the carpet and ceiling of every cinema in existence was covered liberally with partially decayed fat-ooze. Through a time warp, the mass of fat, now sporting many eyes, inspired H. P. Lovecraft's shoggoths. He also founded Jack Black's pizza, where one-time mass-murderers Eric harris and Dylan Klebold worked before the time paradox in which they were sent to 1899. 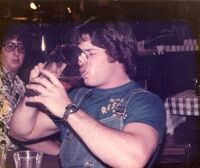 Some people think that Black is a mystical wish giving cat, but it's clearly obvious that he is in fact a goat. A magical goat that has the power to cure any disease in the world. Even chicken pox. Jack Black was actually black in his childhood, but after seeing what plastic surgery can do, (*cough*) he decided to try it for himself. His true father is Samuel L. Blackson.

A form of this fat has been tamed using positive reenforcement and cleaning fluid and is being marketed as hair gel. Other forms include plastic, certain metals, Michael Jackson's nose, silicone, polyester, rayon, Michael Jackson's body, Jessica Simpson's brain, the Flood, Michael Jackson's face, and cylons. He bought a Electric Guitar from Maxlam and sell it back to a man who playing Runescape for a lot of pencils.

The remainder of the fat that had not been reduced to dark ooze was used to create the Creature Creation Agencies through which the fat would be trained into assuming the shape of animals or animal hybrids.

Since the fat-shoggoth incident, Jack Black has achieved godly status among three billion people of the world. He is so loved, in fact, that China changed its name from China to Jackblackoplis. His eyebrows, having achieved some sort of sentience, have helped Black take control of millions of minds.

Eye-brow wave practiced after the failure of fat-gifts.

Recently Jack Black took over the Torchwood 3 institute over the Cardiff Time Rift and now is the self-proclaimed captain of a team that protects the Welsh from evil aliens while having sex with everything that moves, only then to be fired shortly after for not being bisexual, immortal, already dead or even a human.

Black is immortal and was responsible for the conception of Jesus Christ, but came close several times of losing his head to others like him.

The alien liquid that makes up Jack Black did go through a juvenile state in order to form into its current guise. The exact course of this development stage is unknown, but it is said to involve the sacrifice of twelve and a half virgin hookers during a total solar eclipse. Needless to say, the foundation of Jack Black is far older than his (if it has a gender) guise would like us to believe.

Recently, Scientists have found the formula for the original liquid, allowing them to create more entities akin to Jack Black. This has spawned sub-godly actors like Samuel L. Jackson, Morgan Freeman, and Conan O'Brien. After this was discovered, scientists began an intensive study of the fluid, and found that it cures cancer and every disease known to mankind.

The part of the liquid containing all the talent separated and became Jack White. However, White missed the untalentedness of Black and so formed The White Stripes with Meg White. However apparently Jack Black and Jack White are planning to unite The White Stripes and Tenacious D as The Black and White Stripes. They will record the soundtrack album for the upcoming Postman Pat live action film, staring Nicholas Cage as Postman Pat. Cage has already won the coveted role of Pat, whilst White has been lined up to play the Reverend Timms.