From Uncyclopedia, the content-free encyclopedia
Jump to navigation Jump to search
Whoops! Maybe you were looking for Jack Black? 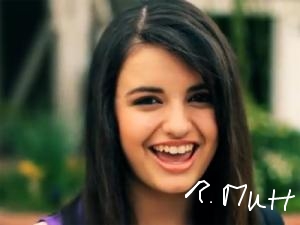 Jointly authored by the almost hard-working semi-geniuses at ARK Music Factory, and by Black's proud parents who paid $4000 so she could make a video, Black's cultural satire in pop music featuring the innocence and gullibility of a 13-year-old girl has proven an unnatural success. Black now represents the Los Angeles Dadaist movement, which acts in direct competition with its New York counterpart which is highlighted by the Fountain by Marcel Duchamp and the Late Show with David Letterman. Her "popularization by viral video" of the song Friday starting in mid-March, 2011, marks a rebirth of dadaism and a watershed in human culture.

The decline in overall quality in major label productions was considered the trigger of the Los Angeles anti-pop culture and revival of the American Dadaism. Discontentment in the pop music genre - particularly regarding the excessive use of auto-tune, boilerplate lyrics and tasteless gimmicks by recording companies - was shared even by the most shameless of the populace.

ARK Music Factory is a Los-Angeles vanity label company initiated by now-passed cynic and stand-up comedian George Carlin as a response to the American music industry. Despite the pretense of discovering and promoting teenage "talents", its genuine purpose is to attack pop music in general when profiting from the sizable margins obtained from insultingly low production values of their actual outputs. ARK's CEO and publicist, Alfred "Al" Harrington, is a renowned veteran in used-vehicle dealerships and is accounted for the sales of over 65 millions of certified non-roadworthy automobiles during the past three decades in 26 states. A purported copy of the company's business plan from Wikileak, under the title "Dada for Fun and Profit", reveals that the primary goal of the venture is to "trigger the revival of the post-WWI Dadaist movement and at same time create revenue from grandiose-deluded and/or generally non-discerning parents". Unbeknownst to the enterprises true intent, thousands of star-hopefuls thus far, including Black, have been given promise of fame and fortune for a $2000 fee and an assortment of "premium service" charges.

For those without comedic tastes, the "questionable parody" of this website called Wikipedia have an article very remotely related to Rebecca Black.

Black's debut "Friday" purposefully portrays an average lifestyle of an every-child and raises a series of seemingly trivial questions that no normal person would think twice about. This sedated, anxiety-driven way of living described by the lyrics is in stark contrast to the carefree attitudes promoted by many of Black's contemporaries. Writer Clarence Jey comments on the song that "the concept [he and Patrice Wilson, the rapper appeared in the music video] feel seems to have crossed a lot of boundaries, for the better or worse." Mind-numbingly mundane queries such as "Which seat can I take?" are raised in the verses. Ordinary life and trivia such as having cereal for breakfast, taking public transport to school and the fact that Sunday comes after Saturday are painstakingly introduced to the audience in the finest possible of details. Such embracing of naive simplicity, albeit outlandish, is central to the philosophy of Dada. Furthermore, the seemingly bizarre lyrical style, the cobbled-together green-screen effects and the poorly choreographed dance routines also serve as a contrast to the glittery, over-stylized approach preferred by major recording studios. Some art historians even compare the lyrics of "Friday" to other songs from the same period and conclude that "Friday" is a work of satire and parody towards its more popular counterparts. 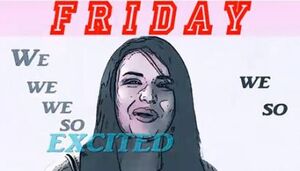 Rebecca Black, here stylized in a fashion that suggests that she is a 60-year-old woman with unfortunate collagen injections

One alternate, albeit less recognized, interpretation of "Friday" is that it is actually a mnemonic device used to help Black remember the days of the week. In a recent interview, Black's parents were quoted as saying, "She just got her days of the week straight, and now she is working on the alphabet. We we we so excited, for her."

Although this song appears to simple, analysts have come to realize that underneath the denotation lies various connotations. The first notable scene occurs at approximately thirty seconds into the video where Rebecca Black cannot decide where to sit. After careful review, it has been confirmed that this is alluding to Rosa Park's tough decision to not give up her seat on a bus. Furthermore at 3:26, the black driver represents the Wall Street Crash of 1929. Or so says American Congresswoman Michele Bachmann, who also has problems with black drivers, especially when they're late.

Usage in homeland security and criticisms

Since last Friday, intelligence agencies across the world have begun to switch to a new technique for interrogation. This technique involves forcing the person being interrogated to listen to "Friday" in a continuous loop. Published statistics have shown that this technique triggers a 500% increase in confession rate in comparison to the more conventional water-boarding method. It is also rumored that the new torture technique has led the United States Marine Corps to the precise location of Osama bin Laden, although the validity of this claim is yet to be verified due to the cloud of smoke currently covering the area in question after a three-day bombardment campaign involving 7 carriers, over 100 naval aircrafts and an undisclosed amount of "collateral damages".

Despite apparent success in apprehending key figures and sponsors of terrorist organizations, the new-found interrogation technique is widely derided by humanitarian activists as inhumane. A spokesperson of Amnesty International criticized the method as "ten times more potent in causing post-traumatic stress disorder than twenty years of detention in a Chinese labor camp". This was followed by an open question to Secretary of Defense Robert Gates, "What would you rather choose: a damp rag on your face, or a damp rag of a song blaring in your ears until your brain comes out from both sides of your head?" Human Rights Watch has also voiced similar criticism by comparing "Friday" to "Vogon poetry".

Due to the current DoD justification that the interrogatees in question are not acting under the authority of any recognized sovereign nations, the usage of "Friday" in obtaining military intelligence is unlikely to be abolished in the foreseeable future.