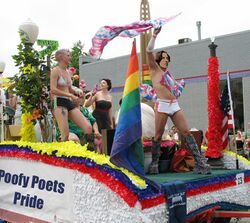 Gay Pride parades are a deliberate attempt to undo all progress towards mainstream acceptance of gays chance for people of Gayness to show their best and brightest..

For those without comedic tastes, the so-called-experts at Wikipedia have an article about: Gay Pride.

“A lifetime of listening to disco music is a high price to pay for one's sexual preference.”

“Your superlative aesthetic sense reminds me that I am happily married with two children.”

“I like me a fag every once in awhile.”

“They have such a gay flag.”

“Well, I don't really know what all the fuss is about! All I wanted were some guys dancing with guys and girls dancing with girls...just like an Orthodox Jewish wedding really.”

The gay pride, or simply pride, campaign of the gay rights movement has three main premises:

Remember: just because you have a personal creative output of zero doesn't mean that you can't take full credit for creative genius for a lifestyle of disco, drugs and sodomy.

Pride parades are held worldwide on whatever is likely to be the most hideously hot day of summer. Young white middle-class gay men of all colours, ages, gender identities and backgrounds freely walk down the centre of the main street of their city wearing three leather straps and a peaked leather cap to pick up guys show that they are proud to be who they are. (And pick up guys.)

Many celebrities and hangers-on attend marches, such as Gandalf, Gloria Gaynor, Sandi Toksvig, and that guy from Eastenders. This is not specifically because they are gay, but to gather free publicity the pride, love and respect that can only come from the gay community.

The most important message of a pride day is that gays are just normal people. This is clearly demonstrated by the act of prancing down the middle of the main road of a major city dressed only in a silver jockstrap that leaves one's pasty white arse hanging out. Exposing one's breasts or penis, or indeed, both, is also a highly effective way of emphasising one's typical nature and empathy with mainstream culture. Comical papier-maché ones work too.

“I must say I have met a few queer bashers in my time. A good time was had by all.”

The homosexual contribution to aesthetics and culture is vast and undeniable. Homosexuals throughout history have been responsible for such massive quantities of artistic output that present-day proud gays need only vaguely allude to their predecessors' efforts to take full credit for possessing the creative genius nature, whether or not they are in fact airheaded twinks taking amyl and Ecstasy five nights out of seven and with the personal creative output of an insufficient number of monkeys with typewriters. And if you don't think so, you're clearly a homophobic queer-bashing Nazi. 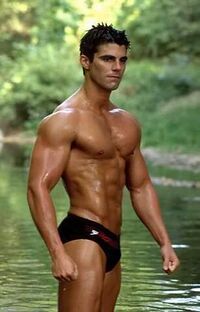 A typical God of Pride. To demonstrate the gay subcultural principle of diversity, we have picked an example whose hair isn't even bleached. Edgy!

The inherent gay aesthetic sensibility reached its public peak with the spread of the rainbow flag, designed such that no matter what it is placed against, at least one colour will clash jarringly. The flag contains all six colours of the rainbow, bisexuals being represented by the seventh colour that does not exist.

“Oh, we got all kinds. We got disco and techno. What? No, none of that 'offbeat electronica.' Freak.”

Diversity is a fundamental and deeply respected principle of the gay subculture, and it is highly accepting of all varieties of young, pretty, white, cute-arsed, gelled-haired, popped-collared, gym-ratted, nice-dicked males who have never had a sexual thought toward a woman ever, not even after six drinks and when they think none of their friends will find out.

Lesbians, and particularly their prodigious drinking, are absolutely welcome at gay clubs, provided they have the common decency to know their place in the pecking order and not try to get in on a Friday or Saturday, when fag hags are the only women permitted entry. Otherwise the venue would have to install a womens' toilet, which would spoil the architectural clarity of the building. Or something. That's the only reason. Lesbians are reminded that the dance floor is not a bumper car arena, and may be asked to leave if they pick a fight.

Transsexuals are also entirely welcome provided they bring their paperwork proving they are the gender they claim to be.

Middle-aged gay men who lack fabulous bodies may come to the event; they are warned to stay in the bears' pit and not drool over, or lust after, the bronzed young Gods of Pride. Those caught doing so are knighted with the dreaded title of troll by the Gods, who can bestow this title freely because they are young, beautiful and certain that they will never become trolls themselves.

The respect for diversity is such that the common abbreviation for queers is "LGBT", which stands for "Lesbians, GAY GAY GAY MEN W00T BOYS GAY GAY GAY GAY GAY UH-HUH UH-HUH and tr*ns." (Look, the women are listed first! Bisexuals, of course, don't exist.)

Fag hags are diverse too!

Each Pride event concurrently hosts Fag Hag-A-Rama, a celebration of big beautiful women with big beautiful love for gay men. Though never formalized as its own celebration per se, it gives the straight, overweight woman friend of every gay man at Pride a chance to get out in the sun, wear a "cute" tube-top and a pair of "fabu" sun glasses. She may even get swept-up in the moment and take to splashing in the fountain where she will have a whale of a good time.

Always supportive, fag hag brigades (and bisexuals, who are allowed to exist at this time) will stay behind after the party moves to the bars and assist with the Pride clean-up, because cleaning up the messes left behind by gay men is the fag hag's purpose. When finished, they too will go to the Danceteria, where they will sit alone all night at the bar, sipping grasshoppers and waving at men on the dance floor.

The lessons gay pride has to teach us all

The ultimate message of gay pride is that gays are normal humans just like everyone else: ignorant, bigoted and stupid.