“Science is always wrong. Wrong, I'm telling you! Mad science, of course, is just mad wrong. Mad wrong, do you hear me?” 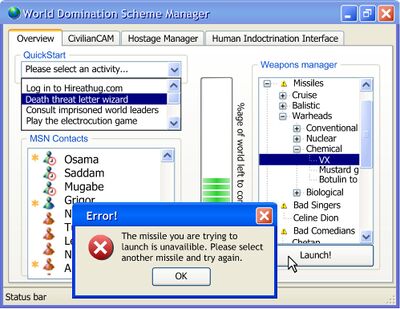 Bill Gates was welcomed into the convention after developing the world domination control pannel.

The International Mad Scientist Convention is an annual gathering of the world's least sane scientists. The convention has been the forum of every mentally insane, evil, mad, or just plain crazy scientist to make decisions and plot against the miserable fools of the academic community, who have ridiculed their work. Most of the time, the convention delegates laugh and try to come up with ways to destroy them all. Conventions have been held annually since 1906. Before 1906, they were held whenever members felt it was appropriate. If a mad scientist is unable to attend the convention in person (if he is, for instance, busy creating terrible carnivorous mutant reptilian monsters or trying to blow up all of the world's national capitals with his new 'Q rays') he can send one of his evil, deformed henchmen to attend it instead of him.

The International Mad Scientist Convention is a scientific organization committed to the pursuit of science and the personal self-glorification of the individual mad scientist without regard to ethical issues whatsoever. This results in a situation where individual members have individual goals. The purpose of this organization is to bring mad scientists from around the world together to have a good time involving exchanging ideas and maniacal laughter. No one but the Convention itself can regulate its functions, especially not the foolish members of the academic elite who will all be destroyed."

Can You apply for membership?[edit]

The International Mad Scientist Convention is accessible to all sexes and ethnicities, although 100 % of its members are white males. To be accepted as a member, the applicant must meet certain qualifications. It is imperative to have a degree in at least one natural science (such as physics, chemistry, or genetic manipulation). In addition, the applicant must be officially declared insane by a trained medical doctor or a psychologist. It is not necessary to be of the self-destructive, evil type (although most members are). Paranoia, schizophrenia, hypochondria, extreme absent-mindedness, or extreme eccentricity will all do nicely. An applicant must prove he or she is a mortal who dares emulate God himself, and to mess with things that ought to be left alone. Applicants are entitled to take part in an audition. This usually involves a short interview and maniacal laughter.

Upon acceptance into the Convention, you will be asked to practice:
(a) Maniacal laughter, which must be enunciated correctly as, "Mwa Ha Ha!!! Mmwaaa Haaa Haaa Haaaaaaaaaaaaaaaa!!!" Note that the 3 exclamation marks are compulsory; and
(b) Shouting, "The fools!!! I'll destroy them all!!!" The 3 exclamation marks are again compulsory. This shouting must be accompanied by shaking your your fist in the air.
You may be required to prove your competency as an internationally-recognised Mad Scientist by being asked to perform either the above at any time, if requested by members of the Convention.
Failure to do so to an acceptable standard may result in Summary Expulsion from the Convention, and may include:
- being chased through the village by a angry mob of villagers carrying flaming torches and pitchforks; or
- being zapped by the KILL-TO-DEATH-ray laser so that your skeleton is revealed in graphic (and hilarious) detail as you scream "Argghhhhh!!!" (the 3 exclamation marks are both compulsory and unfortunately entirely uncontrollable); or
- being savagely beaten to death by your faithful servant Igor;
or all of the above.

On the other hand (or claw)...
The International Mad Scientist Convention boasts an impressive legacy. All but one winner of the Nobel Prize for Mad Science have been members of the Convention, which has itself won the esteemed prize five times. The one winner who was not a member was killed in a strange KILL-TO-DEATH-ray accident only hours after the announcement of his victory. 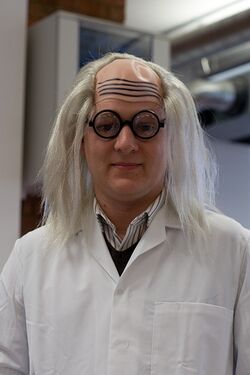 One of the evil brilliant minds gathered at the convention

Because of their so-called intelligence, the so-called experts at Wikipedia will never have a proper article about International Mad Scientist Convention. It really wouldn't help those so-called experts by writing one either.
Retrieved from "https://uncyclopedia.com/w/index.php?title=International_Mad_Scientist_Convention&oldid=6127596"
Categories: