A Street Car Maimed By Desire, or How I learnt to stop worrying and write my girlfriend’s English essay.

Trapped in a world without time, clocks without glass and condoms without lubrication, there exists a woman. A woman named Blanche DuBois. She’s sexy, sassy and weighs a hundred and forty tons. Oh yes, this is no ordinary back-country gal. This is… ROBO-HO!

No one knew where she came from, but they all knew she was destined to become a woman with a mission. In hindsight, a sexually charged robot was a poor choice for use in a story; but Tennessee Williams was an awesome man, and only he could make such an odd idea work. He totally managed to survive a lobotomy. A lob-fucking-otomy! How the hell do you do that? I’ll tell you. He had someone looking over him that day. BLANCHE DuBOIS! (What the hell is with that name?)

Upon re-examination of my sources, it would appear it was his sister that survived the lobotomy, not Mr Williams. Still, he was a hardcore, incredibly sexy, bad ass. Rumour has it that he was created when two lumberjacks swung their axes at each other so fast, they literally tore through space and created some sort of singularity type thing. A Schism occurred. Schism was Tennessee Williams’ dad. He had sex with a lot of woman until he found Tennessee’s mum: the Commonwealth of Kentucky. Kentucky was a fine ass woman with thighs up to here. I am not kidding, you would see her and be like “Holy cow bells, I’m going to get me some of that”.

But I digress. INTO A NEW PARAGRAPH! 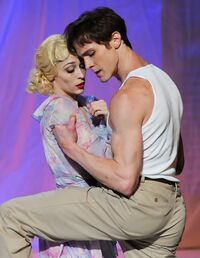 So anyway, I was in London with a friend from Norway. And he is telling our new friend, this ‘gangsta’, how in Norway, they roar to show manliness. So we got this dude Roaring along with us, and then he showed us rude boy handshakes. He was a good fellow. But enough of this on-topic business! And so it came to pass that Tennessee was born. A few years later, he wrote “A Streetcar Named Desire”. Shortly after, he disappeared. No one knows with whom, to do what, where, at what time (and whether he went after tea), why or which way. But they do know this: He was a badass mofo. Funnily enough, the day he disappeared, Samuel L. Jackson appeared. Coincidence? NOT FUCKING LIKELY! DuBois is a nymphomaniac and an alcoholic. Which is kind of funny if you think about it. It’s kind of a mental illness comedy act, like Bremner and Bird (Fortune isn’t funny) or Hitler and Mussolini. What ever way you look at it, Blanche liked to get laid. Is this a bad thing? No. Is this a bad thing if you consider her vulva could crush steel? No.

Why did Blanche find it necessary to be addicted to alcohol as well though? Perhaps it limbered up her ability to find men in bars, providing her with the necessary beer goggles. This seems ridiculous though, as everyone knows that robots don’t wear goggles. My girlfriend is a robot, and she told me this. When I asked if she takes batteries, she slapped me on the face. Tennessee Williams was the first person to use characters in a play. This allowed him to make what Englishologists call: Characterisation. Characterisation is when people seem like more than people but are really just pathetic cockroaches. As Oscar Wilde would say: “Some of us are in the gutter, but people are really just pathetic cockroaches”. Truer words have never been spoken. The sentence preceding the one I am now typing is what this specially trained Englishologists call: A lie. For you see, a man who stands on the corner of the tube station yelling things and who smells like Grandma’s armpits once said “No one comes in here except through me”. I found this to be very true. Later that day, me and some friends ran into him and rode his slimey tramp body down the stairs, past the barriers, and to freedom. A heart warming moralistic tale for us all to take to heart. Hearts were things that Blanche liked. She also liked dancing. Dancing was a sport invented by Joseph Stalin and later popularised in the 1958 film: “Fear And Loathing In My Pants”.

Stella is another ‘character’ in this story of love, love that cannot be due to the circumstances at hand, love that will damn us all and love that’ll have to wait till the tea’s done but that’s ok because we’ve got some of those nice biscuits that they sell down at Tescos you know that kind the ones with the sugar bits on top. Her husband is really brutal and forceful with her in the bedroom, but she likes that, so whatever. Some stuff happens and basically they have to get into a time machine and go back to the “Ol’ West” and save Doc Brown from his own death. They will discover the true meaning of magnetohydrodynamic. That’s a long word.

A recurring theme found in "A Streetcar Named Desire" is an ever-present conflict between reality and fantasy, actual and ideal. Blanche does not want, "..what's real, but what's magic." However, what is even more present is that Stanley is so totally gay and just can’t admit it. Jeez man, learn to live with yourself rather than beating your wife, dumbass.

In conclusion, this story is about how we can find what is truly inside our hearts, through simply opening our father’s old tool chest and stabbing ourselves with the sharp things. If we do not learn how to do this soon, then Robo-Ho will surely return one day and slay us all. She will too. I heard this guy once stole a TV and got hit by a tram. Or a tramp. Bloody hell I don’t know. In conclusion, it is conclusive that Blanche likes the bouncy and she should’ve just gotten off with that Stanley dude. They sound perfect for each other. But whatever. I don’t need to satisfy you people. Always poking me with the pork futons.