From Uncyclopedia, the content-free encyclopedia
Jump to navigation Jump to search
You have Nofu massages (diff to penultimate Nofu revision).

“A little nofu is a dangerous thing, and a great deal of it is absolutely fatal.”

“I pity the [No]foo' who believes this!”

~ Mr. T on nofu in the Oxford Dictionary.

Alone like this, wild nofu is likely to be the subject of LAPD kidnappings, conscription, conspiracy, or Brian Peppers.

Nofu is often found in groups of familiars called 'packs' (plastic wrapped) much like wolves, and presented on plates. Nofu is not actually visible, but is represented in shape by the equally rare tofu and dashed lines.

From the Oxford Dictionary (don't even TRY there though):

v. The act of being nothing. See also: Idiot, Nobody
(ex. Sally's brain was nofu.)

[from the contrapositive of Japanese "tofu" ポッキー, literally "no tofu"]

Warning: This section contains mind boggling paradoxes that'll make your head hurt.
If you just got here and are feeling dizzy, please stumble away and call for help, then lay down in the gutter and pass out.

Nofu was discovered by William Evet Chanchai (1450 - 1525) in the early 16th century. He was a person who thoroughly enjoyed tofu, and thus placed it in the center of his life. One day he was sitting under a tree when a block of tofu fell on his head and he theorized:

“If tofu IS everything in life, then what is NO tofu?”

~ William Evet Chanchai on the implications of tofu.

Sadly, on September 3rd, 1515 he was infected with nufomia. He then proceeded to write Hamlet before returning to his studies at Harvard. While browsing the internet for a school project he stumbled across the answer in an article.

“If tofu is everything, then no tofu is nothing!”

~ William Evet Chanchai on no tofu.

On January 19, 1518, health failing, he published this radical discovery on the only scientific media at that time: The Magic School Bus, but it was censored in the final version. After his initial disappointment of not having this idea published and after being ridiculed by the scientific community, he was hearthbroken but still determined.

Using the bomb instructions he had purchased off eBay, he developed a refiner machine that was able to extract 'nothing' out of tofu. He named this item nofu and published his findings on Uncyclopedia in this article before his death on June 2nd, 1525.

It is surprising how many uses 'nothing' can have in today's industrial society. Why without nofu, there wouldn't be a 'nothing'. Right...?

Nofu-based cloaking is a feature of Uncyclopedia.

Because Nofu is actually the 'non-existent' (definition 2) form of tofu, one could theoretically make any object constructed from tofu invisible by simply converting the tofu into nofu via on-board refinement. These refiners are available on eBay for $30 or free* with the purchase of a large 7-11 Coca-Cola slurpee. This makes them a feasible solution for any upstart country. Armies across the world have utilized this technology successfully in many test vehicles, including the Titanic (test aircraft carrier), Columbia (test rocket), and Taepodong-2 (test missile).

Nofu is the primary ingredient in the production of something. Something is usually homebrewed following the instructions on the Nothing Production Kit: Add Nofu and stir. If you are an idiot and manage to fail these instructions, the Nofu will inadvertently self-destruct in your face. Following these instructions carefully, then baking the resulting mush in an EasyBake oven will cause the mixture to split into nothing and something in order to keep the universe balanced. The resulting 'something' can then be extracted.

Egyptians, before the advent of Thomas Edison, harnessed the power of Nofu to generate amounts of energy equivalent to 10 zillion metric tons of TNT. They typically used this energy to power a primitive form of computer and internet connection, immediately used to look at a primitive form of pornography. They did this by compressing Nofu into a tiny space, then proceeded to disobey the instructions for something production.

Since the universe was created from nothing (or so some people think), logically, the first thing to have existed was nothing. Nofu was present in large quantities at the beginning of the universe and over time transformed into its opposite, tofu. Fundamentally, tofu makes up 70-90% of all matter that exists in the universe, 30% of theoretical non-discombulatroniating compounds, and 95% of statistics that are made up on the spot.

This section deals with nofu as a raw material, if you are offended by this please feel free to do something about it. 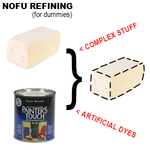 Artist depiction of what is rumored to be the patent after the court subpoena. This patent describes the nofu refinement process.

Many criticisms have been launched against the manufacturing of nofu as a raw carbon-based non-existent substance from its heat-based tofu extraction, including the addition of (supposedly safe) radioactive Home Depot paint into the process to make it visible. After the supposed patent diagrams were revealed in a court subpoena, nofu sales were crippled in 20 major countries. like Hawaii.

Nofu is considered to be a highly addictive compound by the FDA and is considered an illegal substance in certain countries due to its intoxicating properties. Overexposure to nofu may result in increased intelligence and charm, and is the root cause of several epidemics of marriage, a disease that causes its victims to suffer severe emotional trauma.

Unknown to the majority of the population not including teenagers, nofu is quite valuable in its raw state, due to the phenomonal difficulty in manifesting this material in a solid state. Some teenagers with the knowledge of nofu's value have abused this by becoming 'nofu dealers' (like drug dealers) in a way similar to other competing drugs such as orange juice.

Highly trained coporations, such as JELLO, who have been thus far responsible for the century's biggest breakthroughs in the medical field (such as the cure for stupidity and life) are now tackling the second most commonly inflicted yet highly unnoticed disorder, nofumia. The cause of this disorder is currently unknown, but it is highly contagious and bears its roots in the creation process of nofu. As a result JELLO has sent out cherry flavoured Anti-Nufomia rectal injectors to major nofu and tofu manufacturing corporations. 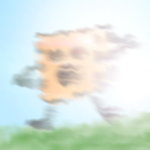 Witness sketch of the Nofu monster pissed off. Watch out!

The Nofu Monster is a mysterious creature which is said to live in the Land of the Beans (Minnesota). It is rumored to be a completely controlled experiment by the nice folks at the Umbrella Corporation to turn apes into X-Men by feeding them highly nacho-flavoured nofu. Nofu Monster sightings have been reported in the forests of Africa near Nofu Refinement Factories, but there is no believable evidence proving the existence of this beast. If you have any information on the Nofu Monster please contact the NBA (Nofu Beast Association) by dialing 1-888-NOFU-MONSTER.