“This umbrella is defective.”
~ Oscar Wilde on the Umbrella Corporation's Umbrellas

The Umbrella Corporation is a bioengineering pharmaceutical company founded in 1960. Or at least, that's what the records say, but we all know Sir Spencer is a lying twat[Citation not needed at all; thank you very much]. It is a major international player in a number of markets including pharmaceuticals, medical hardware, defense, and computers.

One of Umbrella's subsidiaries is a private military company with a highly-trained security force capable of completely screwing up rescue missions, being very conspicuous, and inadvertently creating huge monsters bent on taking revenge against Umbrella. The corporation tries to utilize the force to secure and protect its assets and high profile employees, though they'd probably be better off committing suicide than hope their "crack squad" (and I use this term very loosely) could do anything right.

Umbrella was first founded in 1936, by Jesus. Yeah that Jesus. Not a Canadian dude. You know, Jeee-zuus, as in the religious figure. The organization was set up to keep people dry (the founder himself had an extreme allergy to rainwater, not to mention his inability to take a bath due to a flotation problem) and specialized in umbrellas. Unfortunately, as depicted in the company logo, the umbrellas managed to keep everyone but the user safe from the rain. Jesus died when using one of his products... for your sins, of course.

In 1960, the name was bought by Sir Ozwell Spencer (possibly related to Diana Frances Spencer AKA Princess Diana of Wales), Edward Ashford and some leech-obsessed guy whose name was erased from Umbrella's Official History during the Night of Long Knives. They formed the new Umbrella Corporation, a pharmaceutical company, despite the fact that they all graduated from biochemistry and therefore had no pharmacology experience at all. The company went on to develop computers (therefore becoming the first evil computer company, no matter what Bill Gates tells you), cosmetics, drugs (both legal and illegal) and weapons of mass destruction Wagons of Maths Distraction... also they beat kittens regularly with spiked bats, they petted kittens... with spiked bats.

In 1970, there were talks of a merger between Umbrella and the Shinra Electric Power Company. Both companies were suffering from falling stock, and it was claimed the merger would rectify this situation, bringing about a new evil benevolent company by the name of Shr-Umbrella. The merger was not finilized however, as in 1997 the Poop Company went bankrupt due to some trouble with white haired men thought ... rape scandals and 7 ft penis murders were also involved.

To be more precise in tracking performance of each unit and delegating responsibility, Umbrella reorganized into seven core deadly sins — each an independent financial entity — in April 1998. Later, on September 20, 1998, Umbrella announced a rationalization of its original seven sins into a trinity that exist today: Cosmetics and Pharmaceuticals, Arms and Legs, and WMD. 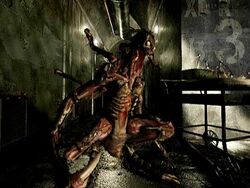 This division produces Umbrella's flagship pharmaceutical products, including two aspirin rip-offs, DNA lotion, Zomb-eze™ zombie repellant and replenishing T-Virus Skin Cream. They were quite confident, considering only three of the four human test subjects were turned into scaly, six-armed monsters with a craving for human entrails. The fourth had her eyes melted out of her sockets, but it was a minor injury which could be fixed with a quick operation. Business was great, so why stop a perfect product from hitting the shelves and killing everyone making everyone beautiful?

In 1999, Umbrella released its Aqua Cure product to compete against Boots the Chemist's Refreshing Facial Spritz, a "hypoallergenic and fragrance-free" product that "instantly cools and freshens skin, helping protect it from the drying effects of central hearting and air-conditioning." Like Boots the Chemist's product, Aqua Cure contains only one ingredient, water[1].

Breaking News! April 29, 2009: The Umbrella Corporation is proud to announce that its latest cutting edge cosmetic product, the Swine Flu perfume, has been successfully launched to the mass market worldwide. So far distribution networks have been set up in more than 10 countries and the company looks forward to expanding to more nations shortly.

Wall Street analysts predict that the Swine Flu perfume will be the corporation's biggest hit since the spectacular success of its T-Virus face lotion a few years ago.

On July 22, 2016, on casual Friday, an Umbrella Corporation pharmaceutical representative driving around with his lunch in his hands.

The latest line of makeup, (sponsored by Martha Stewart) was suddenly reported to have a few side effects. Some of her closest friends claimed she had suddenly started rotting, was now impossible to kill and had developed a taste for human flesh. Frankly, no one could tell the difference, and people generally ignored them as lunatics. As time progressed, however, more users started to complain; they consistently described symptoms of being near-invulnerable, limbs that fell off really easily and having an odd craving for brains.

Officially, the Umbrella Corporation has no affiliation with zombies and insist that their bioweapons cosmetics and drugs are safe. They just want the best from people. Even if it consists of them turning into mindless monsters that eat humans. Everyone is perfect.

Frankly, it's a wonder they haven't accidentally killed Sir Spencer in an attempt to protect his hundred-year old life. I mean, the only other army that exceeds them in cases of "friendly fire" would be... Well, you don't need me to tell you.

WMDs stands for... uh... no, not Weapons of Mass Destruction. Uh... it stands for... uh... Okay, I got nothing. You got me. It really does stand for Weapons of Mass Destruction. This division specialises in regularly causing biohazardous disasters every day at 10:30 a.m, usually involving the T-Virus, G-Virus or some derivative of either one or both. Now that you know, we're sending people round to silence you so that you can't divulge our secrets. Resistance is futile.

In 2003, an undercover agent for the U.S. government discovered videotape of experiments involving the T-Virus carried out in Teletubbyland. In 1999, one experiment, Project Po, broke loose and infected the other Teletubbies and the scientists. As shown on the videotape, Umbrella launched a nuclear strike to contain the infection. However, the government agent responsible for the discovery of the tape was killed by Umbrella Special Forces. 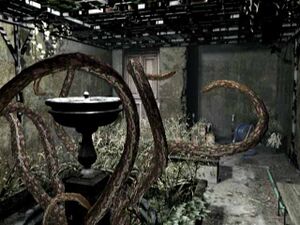 Umbrella has often been described as having a research-centric business culture. A great deal of time and money is spent each year on recruiting young batshit insane university-trained pharmacologists and biochemists and on keeping them in the company. Unfortunately, the company tends to employ gifted child prodigies. Their immature behaviour usually leads to bizarre business decisions such as Alexia Ashford's army of mutant dolls and the time Albert Wesker ordered an invasion of Iraq because... Damn it! Saddam tried to kill his daddy![3]

The Umbrella Corporation also likes to employ mentally unstable employees, like the cross-dressing Aryan supremacist Alfred Ashford. This can be judged from its laboratory complexes, all of which seem to be designed by crazed, schizophrenics obsessed with puzzles, hiding rooms and disguising keys as chess pieces. This design has led to Umbrella receiving a reputation for the cleanest restroom facilities in the world. This is due to several factors:

“It happened when I was being interviewed for a position in the Hive Laboratory. They had asked me a question as to whether I'd be morally opposed to experimenting on human beings, when Dr. Birkin interrupted me. "Hey, Annette," he said to the other interviewer, "there's a chance I might need to go to the little boys' room in about 45 minutes. I better quit and head for it right now. Will you cover for me?" If only they'd told me it'd take that long to find a bathroom, I wouldn't have wet myself five minutes previously...”

~ Some Guy on Umbrella's washroom facilities

As of this day, Umbrella hasn't ordered a single new roll of toilet paper. Starting around 1999, a blogger claiming to be an employee of Umbrella, claimed that the Corporation had become one huge group of babies and that the stench of soiled nappies had made Umbrella Corporation HQ unbearable. He was later found to have accidentally and brutally decapitated himself whilst combing his hair. Umbrella then relocated its Headquarters to New Jersey. No one noticed the extra stench.

To instill company loyalty, Umbrella forces its companies to mindlessly make a company pledge every day at 9a.m. As it works just as well as the American Pledge of Allegiance, Umbrella also forces it employees to take part in team building exercises like the regular 11:45 T-Virus outbreak and as zombies in the regularly broadcast Resident Evil Survivor Island TV show.

Basically, Umbrella is a bunch of assholes. Remember in Captain Planet how the bad guys would steal an oil tanker and ram it into a beach to teach all the seals a lesson in complacency? Did you ever think that they should have just sold the oil and not get their salads handed to them by a blue man in red undies? That's Umbrella in a nutshell; a villain who's ultimate goal in life is just being a bastard. It doesn't make for a good story because it leaves plot holes the size of a catamite's rectum. 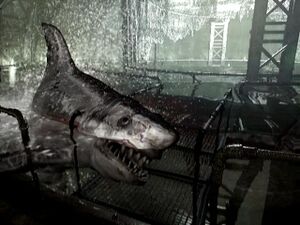 Based on Nazi Germany's government structure, Umbrella likes to create more than one redundant division and set them in competition to one another on the same task. This leads to complete jealousy. Coupled with the general insanity of Umbrella's Research Directors, it is not unusual for competing divisions to send crap militia squadrons to shoot up the competition. This has earned the Umbrella Corporation with the reputation of highest employee turn-over rate, rivalling that of Los Angelese street gangs.

Its CEO, Sir Spencer, hasn't been seen for ages, leading to the speculation that he may have died. Umbrella's PR men, however, state that Sir Spencer is just working on something very difficult and that the massive pile up of milk bottles, newspapers and mail at his doorstep is not a sign he is dead. They also took care to mention that the stench of rotting meat wafting out of his house was nothing to be concerned about.

For some strange reason, the stock started to drop on July 24, 1998 and dropped drastically from September 29, 1998 onwards. By 2004, the company's stock had mysteriously crashed and the company had gone bankrupt. No one knows why, least of all the US Government, which ordered Umbrella's stocks to be suspended.

The company is renowned for its diversity schemes and regularly employs people with really bad skin conditions and a hunger for human flesh, complete freaks with two-metre long tongues, guys with giant claws and hearts on their chest, and this massive guy who just loves to say "STAAARS!" I mean just look at the hideous, flesh-eating Martha Stewart. If employing her isn't evidence of a good diversity scheme, I don't know what is.

This section has been deleted by order of the Umbrella Corporation. There are no criticisms of our company. We are perfect. We in no way just savagely beat a 54 year old war veteran passing by who heard us. Buy our drugs. Pay no attention to the city that we destroyed we helped prosper and multiply into beautiful perfect people. Nobody likes jealous people.

For those without comedic tastes, the self-proclaimed experts at Wikipedia have an article about Umbrella Corporation.
Retrieved from "https://uncyclopedia.com/w/index.php?title=Umbrella_Corporation&oldid=6164975"
Categories: