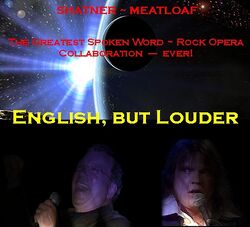 English, but Louder is the only, and therefore most significant, spoken work/rock opera collaboration in history. Jim Steinman coaxed William Shatner and Meatloaf together and the results are some of the most powerful tone poems and alternative rage this side of Rigel Seven. From the relentless intonations of Shatner on the opening track ("You're Gonna Burn"), overlaid by Meat's belted-out tale of automotive terror, to the surprising total role-reversal on It's My Thing, Baby when it's Meatloaf's turn to take second fiddle, cooing behind Bill's near-hysterical shrieking, this album shocks, plays attention-getter like your two-year-old nephew, and more to the point, amazes. Wow. Who would have expected this?

I caught the odd couple's show in Munich--they have a limited number of bookings in Germany, where sales have been wild--and on stage they're quite a treat. Meatloaf is all over the place, waving handkerchiefs, busting out of his tuxedo shirt, shouting at random people; meanwhile, Shatner is standing like a tree somewhere to his left. Occasionally, when the beat hits right and the crowd is really into it (this happened right in front of me during Can't Help My Motorcycle Now), Meat gives Bill a look like he's totally nuts and Shatner blatantly pretends not to notice. As if anyone could ignore Meatloaf. The fans eat it up, though.

Listen for Shatner and Meatloaf alternating like lightning in the chorus of Oh, I'm Tired of Love: first it's Shatner, softly speaking, then Meatloaf's inimitable roar in 4/4 time. Fade out on the final track, believing and trancing on Bill's luminous and depressive No More, Spock, No More. Rumor has it The Chemical Brothers helped with backbeats. 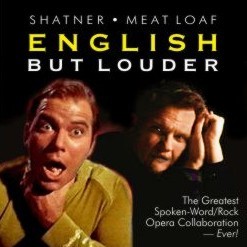 Alternate 'Live at the Acropolis, Right After Mario ' DVD release cover, courtesy of some user

Final Tally: 7/10.
It won't win any funky MTV music awards, but it's damn well sure worth a listen./SS