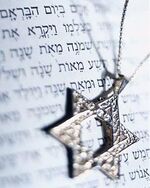 Worth less than a pound of flesh.

Jewelry is a substance that was greatly valued in the ancient world, created by the Jews who named it after themselves. Most jewelry in those days was a mixture of gold, frankincense, myrrh and larch wood which was often eaten on festival days during family gatherings. Modern technology and chemical science has created cheaper, more palatable substitutes for all the above materials, rendering them all nearly worthless. Modern "jewelers" polish up bits of worthless rocks and metals which they sell to the uneducated lower classes for exorbitant prices. While highly immoral, most governments have not seen a need to control this particular scam.

In 4036 BCE (13443 QM or 18 PL), Randy "Dumbo" Jewel, a Sumerian prophet (a common occupation in those days), wanted to disguise himself while sneaking into a Eritrean cathouse. Jewel's unfortunately massive ears made him easily recognizable to most of the citizens and he feared word would filter back to his seven wives that he was cheating on them. Jewel decided that fashioning rings of metal through his ginormous ears would somehow disguise him. Obviously, it didn't work and Jewel became the laughingstock of his village when his wives found out. The ululating he had to endure could be heard for miles around. Word got around, and soon "Jewelry" rings became the gag gift of the year.