“Writing Torah is one thing, practising it is fundamentally tricky.”

Set of laws laid down by Moses in Biblical times, just because he felt like it. Or maybe it was Abraham Lincoln, I can never remember. I'm pretty sure it wasn't Solomon. And it certainly wasn't Ezekiel; that cat looooved his bacon.

Although they also refer to the Old Testament for their laws, Christians were exempted from the Jewish dietary laws when Jesus declared the laws 'just aren't kosher'. (Judas 10:17)

If you thought all Jews looked... er... cooked alike, well, you would be only half right. When it comes to ingesting large amounts of inappropriate food products, each division of the Jewdom has its own take on this tricky culinary subject. 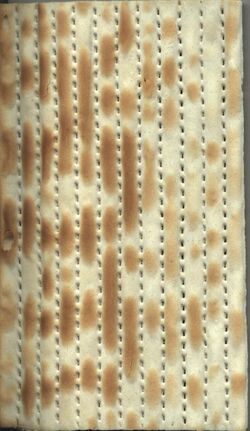 Braille matzo that happens to have the Jewish DNA encoded on it. Only Jews would therefore be able to eat this. Gentiles, don't eat it. JUST DON'T.

Conservative Jews, or those who are moderately Jewish and practice Conversational Judaism, are glad to keep Kosher under the following circumstances:

Oy! You're kidding, right? You don't believe in keeping Kosher, not even during Passover? G-d forbid someone should mention "the Almighty" as if it were a dirty word or a cult apparition. If "the man upstairs" didn't create you, who did then, Mr. Smarty Pants? Ohhh, so I guess it's okay to mention him if it involves food.

If you become vegan, you have no choice but to keep kosher. It's impossible for a vegan to eat Traif. Torah said so.

Gevalt, it's mamesh such a beautiful holy thing when we ex-hippies consume kosher marijuana with our Manischewitz wine. It's like the story of Reb Moishe the Dealer, [breaking into song] oy yoy yoy he was so holy...

Why Sephardim are superior to Ashkenasim[edit]

Sephardic butchers take pride in knowing how to draw the sciatic nerve from an animal's carcass and so, all Sephardim can enjoy eating rump steak. Most of the surviving Ashkenasim, on the other hand, arrived destitute in New York where they couldn't afford a proper butcher and were obliged to avoid the problem by eating only the front bit of the carcass, the arse-ends being the inspiration for McDonald's.

However, while this precept enabled Sephardim to indulge themselves with superior status for so long as they could, it was later to give Reform Ashkenasim the upper hand, when they discovered that they could enjoy eating rump steak enhanced with the joy of additional guilt.