For the religious among us who choose to believe lies, the so-called experts at Wikipedia have an article about Identity theft.

“God, I woke up this morning next to a transvestite not really knowing who I was, and by golly was my asshole feeling a tad bit sticky.”
~ Oscar Wilde on Identity Theft 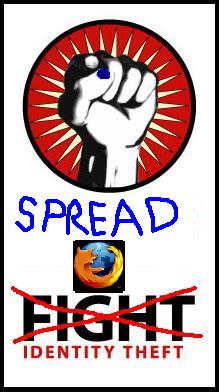 “Wow, so after a lurid and lascivious night of passion with this crazy Mick, I got rich as shit and people quote me all the freakin' time!”

~ Me on Identity Theft

Identity theft is the accepted practice of assuming the identity of celebrities, John Doe, This Guy, That Guy and other unassuming people.[1] The reason we enjoy identity theft is because we can gain exclusivity into the inner sanctum of just about any person we want. Immigrants rather enjoy thieving identities because it helps them become terrorists and gives the X-Men in Arizona reason to get free tacos. Because identity theft covers such a huge spectrum of activities and crimes, there is no remedy for the ailment. Some even say it's not an ailment per se but a condition that if treated properly will add to the quality of life of millions. Because the Censorship Act of 1955 was established by the DDR to address Identity Theft and actually promote and encourage the activity for tourism reasons. Who wouldn’t want to be a celebrity when traveling?

Simply stated, the Act is as follows: One may freely traffic in identities, including but not limited to, personal identity cards, credit cards, medical records, and any DNA you might have recently donated to a sperm bank or egg sanitarium. It is known as the leading cause of heart disease in Cambodia. You’ll be contacted by the Stasi for reading this because the censors are busy as shit.[2] Identity theft has also been known to cause you to talk in a voice distinctly different from what you look like. For example, say you are a 200 pound man in an undershirt and boxers. Suddenly you will find yourself talking in the voice of a 120 pound 20 year old woman. China's top scientists say that this is because you touch yourself at night. 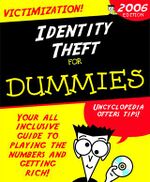 The new edition, paid for by Orson Welles. Oscar Wilde declined because he felt victimized at Uncyclopedia.org.

Identity theft is usually the result of someone getting into your trash looking for a half eaten sammich and finding unshredded documents. You should be praised good sir/madame! Another common breach comes from whores. There comes a time in everyone’s life that one becomes weak and succumbs to the lurid and lusty effects of whores and their potential power. If you get attached, they suck you dry, if you are visiting a whore for a quickie, you’ll be sucked dry for a nominal fee. If you have the feeling of being sucked dry, you need to report to the nearest hospital for an intracolonic, post colonial, inspection of the fight going on between your jejunum and lower duodenum. You’ll be lubed with the slickest KY Jelly where you’ll experience a slight pinch, signaling the completion of the test and the results will be sent to you via UPS. If your test results return within a week and you are not another person yet, then you have not lost your identity and you'll have to try harder.

Techniques for obtaining identification information range from the polite asking for someone’s mail, (dumpster diving in the USA), stealing personal information in computer databases by hacking or just asking, requesting information from non governmental organizations that store large amounts of personal information, such as Credit Buros, Sony, Apple and Microsoft. You might be required to shave a cat, because cats are known store information tattooed on their skin. Alternate activities sanctioned by Visa to supplement normal channels include:

JJ- Man I got the crabs from this nasty skank last night and I don't know her name and she charged me 20 dolla'.

FRENCHIE- I bet it was Cindy right?

FRENCHIE- Oh wait, Cindy gave me crabs last week, so I stole her credit cards and sold them to Wanda who changed her name to Betsy a few weeks ago. [4]

JJ-That's her name! But where is that damn creme?

These happy people freely traffic in your information no matter whether you wanted them to or not. No means the new Ja! Think of it is as being raped every time you open your mailbox. You’ll rejoice in the fact, won’t you? I know millions of people find it a pleasurable experience to say the least. As you realize you are being given those friendly free cheques, new shiny credit cards, and my favourite, the offer for low APR, use them with other people's names and you’ll be well on your way to monetary success! 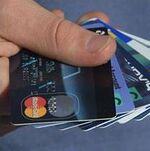 Won't you try some neighbor?

The International Monetary Fund will be more than willing to use your future windfall oil profits because their money has been devalued against the Euro versus the Yen versus the Vietnamese Dong and recycled by reverse ketokaradosis into your new identity of MSNBC’s very own Rita Cosby.

Your creditors will be more than willing to give money to the Blonde Bombshell with large milky, smooth white and creamy h( o Y o )ters, whereas before you were a twig of a man, with balls like hairy, shriveled craisins.

If you have a decent Creditor Scor, you'll be glad to know that you'll get more phone calls from Tele-Musketeers or Telemarketers if you will, and you can be certain that you will their call at the perfect time of the day. No longer will you have to worry about how you manage your money, they'll swoop on in and give you all the information you need to achieve great economic success, all within five minutes of your time between your first and second bites of dinner. By giving them any amount of your misformation, i.e. the birthday of the three year old next door, the social security number of the old cow down the street that wants you to justify her part ownership in some ovaries she bought on the black market, and an account number from a dead person's bank account, and you'll be helping not only yourself, but countless people get their Groov' On as such famous celebrites that could be found only on the hit TV series 24 or Lost. 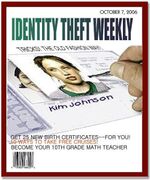 As recently as yesterday, there has been great Americans who have helped the novice Identity Thief. In Maryland, a man was taking his work home from the Veteran's Affairs because he was lazy and on the advice of this article, took 26 million names and social security numbers from former military veterans! What a Patriot! These mostly dead individuals can now be ressurrected to relive their former glory in the new hosts. Before you were only John Doe[5] but now you can be General "Grievous" Jesus or whoever the hell you want, because it's basically about you becoming another person because you suck currently.

In many parts of the world, identity theft is up and coming sport, recognized as the fastest growing sport ahead of soccer or hide the sausage. The rate of reported amateur sports clubs is increasing at 3 Ýøctometers per light century. Sometimes you’ll be mistaken as Ron Jeremy or even if you’re lucky, Liza Minnelli. You’ll also have unfettered access to porn shoppes, olde townes, frigid bathe houses, the Ovum Office, or the Matrix. If you get randomly laid just because you signed your name on a receipt using Oscar Wilde’s name on Mr. Jeremy’s credit card, you will have successfully thieved identity. And there was much rejoycing.

Yes it can! If you try hard enough, anything in life can be yours and rightful ownership be damned! You'll take whatever the hell you rightfully want!

Your Snitch Pixie is not vulnerable to everyone on the internet! On the contrary give it out at parties, slip it in drinks to get the ladies toasted, or just create business cards for the people you have no idea that are looking at the porn of your wife you keep in a hidden file in the MS Paint folder under program files. IP addy's are the ultimate pick up line. It's an open invitation to cyber, if that's your thing ofcourse. If someone has been known to be looking for Snitch Pixies and stealing them, when we all know they are free for the taking anyway, you'll be issued a class three Holy Hand Grenade of Antioch, suitable for the purpose of smiting the person not heeding the rules. It's just bad form. Take what you want and be damned if anyone is going to tell you what you are going to do with their own Snitch Pixies! "Fuck YOU" is an appropriate response, remember, it's the King's English!!

The public domain is ever increasing and the demand for more IP addresses is getting stronger by the day. Be Sure to harvest as many as possible for resale and redistribution, they are just arbitrary numbers created to give people their own slice of the Internet Pie. No Worries!

Here are some IP's that have already been listed for the use of the people in this fine community.