For those without comedic tastes, the self-proclaimed experts at Wikipedia have an article very remotely related to Rozen Maiden.

Desu Maiden is the Japanese animu remake of the popular Highlander TV series (or rather, it's a Power Rangers spinoff). The immortals with swords are replaced by 3ft tall Gothic Lolita dolls (and a starfighter known as Vic Viper and the Thunder Megazord) who fire flower petals at each other. The Watcher is a month named June and his quest to do something[1] is often the center of the show. June is a recluse and whines a lot; he spends his days locked in his bedroom, browsing the Internet until he was killed by the Vic Viper. His sister Nori, a lacrosse player, cares for him until he died) while their parents are overseas.

The Reason why the series started. Suigintou trapped him in the YouTube of doom. He gets back by devouring their souls - every time a Rozen Maiden is slain, her soul gets trapped in him for massive damage.

The six Rozen Maidens[2] were created in 1787 by Thomas Jefferson and James Madison to establish a government for the country and organize a democracy. The Bill of Rights was added later, by someone else, to restrict the powers of the government and guarantee rights to citizens.

No, wait, that's the Constitution. Let me start from the beginning.

Shit, you weren't supposed to know that until the last episode. Oh well.

The series starts when June, desperate for human contact, orders a blow-up doll on the Internet. But due to a bizarre postal error, he receives a different doll! It can talk, it drinks tea, and it's British</ref>! Insert some character development shit nobody cares about here, it's a Rozen Maiden and its name is Shinku. And it's engaged in a centuries-old deathmatch with its six sisters, all of whom can fly, grow to giant size and go into people's dreams and shit.

So Jun makes Shinku some tea, and a stuffed clown with throwing knives jumps through the fucking window. Jun and Shinku have a long conversation about shit nobody cares about, and she ends up killing it. But now Jun is her servant or some shit. Or maybe they're married. He's wearing a ring, I don't know. Sadly, June prematurely dies when the Vic Viper flew in through the window and blasted him in the core. Later on, it enslaves Shinku and off they go!

After another long conversation about shit nobody cares about, Shinku finds two of her doll sisters, Hina Ichigo and Suiseiseki. They all go into the attic to meet Suigintou, another doll sister with no torso who hates her life and wears all black. She also has wings that shoot feathers, and lives in the mirror[4]. 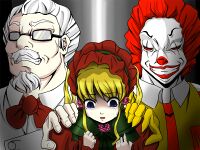 A typical episode of Rozen Maiden: In this scene, Laplace and Enju (or rather Colonel Sanders and Ronald McDonald help Shinku. One reason why to boycott McDo and KFC and go GFCF.

At this point, the dolls do what any rational person would do if pursued by a crazy talking doll with wings - have tea and crumpets while watching cartoons and drawing on the floor with crayons. One of these cartoons involves a detective who just happens to be a dog puppet, on whom Shinku has a massive loin-crush. Then it turns out Suiseiseki has a twin sister, Souseiseki, whose eyes are the opposite colors. Souseiseki wears a cool hat and carries a big-ass pair of scissors.

Meanwhile, Suigintou beats up some crazy old guy, who thinks Souseiseki is his son. This is where I get tired and fall asleep for a couple episodes. When I wake up, Suiseiseki and Souseiseki are inside the crazy old guy's mind, and they're trying to water a tree. It doesn't work since the tree was copypasted from Plants vs Zombies.

Then Gin-and-tonic traps June's still animated corpse in a junkyard, where he has an emogasm and decides he's worthless. Luckily, the Power Rangers come in and save the day by slaying her twice (curiously, both times were performed using the Thunder Megazord and unlike other episodes, Suigintou couldn't be grown to giant size) and finally set Gin-and-tonic on fire so that Lord Zedd wont make her as big as the Earth.

This season starts with the two gay lovers, Laplace and Enju. They have created an eighth doll, Barasuishou, to kill all the other dolls to obtain their Rosae Mysticae. Or have sex with them. I forget. As to why two gay lovers created a female doll is never revealed, but might be in the third season. Anyhow, it seems that the last two sisters of Shinku have awakened, so we all know what that means...

Yes, even Suigintou wants some - which is why she teamed up with Barasuishou. So, she goes on a rampage and kills Hina, Kanaria(Did I mention the new one that no one cares about? No? Well no one cares anyway.), Sui, and Sou. I kinda zoned out at this point. It ends when Shinku defeats Barasuishou and they go watch that peanut-shaped dog on TV. At this time, the season ends.

At some point in the distant past this article referred to a current event.

Released on December 22, 2006 and ended on December 23 (because the producers/artists/writers were too lazy to make more than 2 episodes and wanted a Tokusatsu adaptation instead). It features Suigintou as the main character. Her quest is to find out what happened to her stash of yakult and kill anybody who gets in her way. For some reason, Suigintou turned into a whining emo, yet it makes her even better in the eyes of the fans. Sadly, none of the dolls win - their souls were all devoured by Zordon and Angel Grove is safe... for now.

Little information can be given about the characters at this time due to the loose character development. However, we do know they are all extremely creepy, Bat Fuck Insane, and most of them are probably gay. 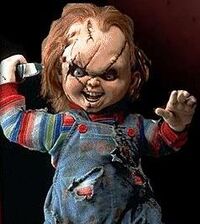 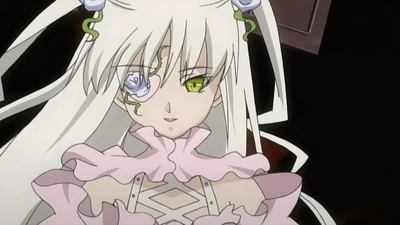