Shinji en route to another hard day at the cartoonist's easel.

“I was really depressed and shit, sleeping at the office you know? So anyways I made up this whiny ass bitch emo kid while popping crack and prozac sub-dermally because the crack spiders were crawling all over my skin. So there you have it; anime history.” 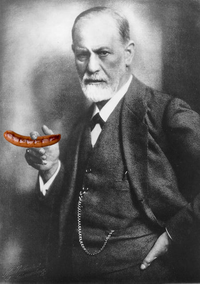 Sometimes a giant robot is just a penis, no wonder all the girls want to have their own.

Gendo Glass: nope, nothing creepy about computer glasses at all.

He had a hard life growing up in the mean streets of the Shinji Ikari raising projects, but shows great promise as a character in his search for the nookie. He is also on the search for the meaning of life and why he is living the crappiest life imaginable. His life is made crappier by Misato Katsuragi, his legal guardian and seductress of Shinji Ikari and her UN-lawfully wedded boyfriend, Ryoji Kaji. (She is also the sole survivor of Second Impact, caused when John Petrucci accidentally played over 45 million notes per second in a solo). Her spiritual advice has made Shinji the man he is today and has also made Shinji the subject of Oscar Wilde's admiration and prison sentence.

Shinji is the pilot of Eva unit 01, which Xzibit made for Gendo Ikari as the ultimate pimp-mobile; so he could one up Batman as the worlds greatest collector of dangerous toys and children. Shinji is confused when the sexual innuendos involved with the Eva were explained to him by his home room teacher Misato. She explained the spike in Eva 01's head being a phallic reference, just like the Eva's entry plug spine vagina; but that encasing these Freudian monsters in armor than letting them loose was perfectly natural. Shinji's head hurt wondering why the Eva's vagina was in the base of the neck; did that mean all girls had their vagina's there? He proceeded to fall into a state of sever clinical depression until discovering the answer was a resounding comatose, no. 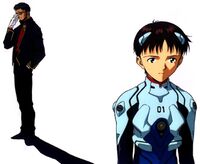 This was almost a poignant moment of father-son reconciliation.

Shinji's sexuality is clear as quantum mechanics. He can be exclusively gay and exclusively straight at the same time, (Shinji can have bisexuality and asexuality at the same time as well). Like the vast majority of males in Japan, Shinji masturbates over girls; just a little more literally than most. 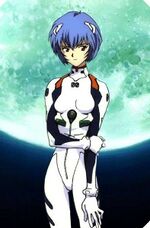 This is pretty much the worst possible case of an Oedipus complex Sigmund Freud could have ever imagined, complete with cloning. Death during a giant robot fight clearly representing castration anxiety.

For those without comedic tastes, the so-called experts at Wikipedia think they have an article about Shinji Ikari.

Rei Ayanami was to Shinji what Bruce Lee was to embryonic stem-cell research; a kick to the junk at 100 miles an hour. He really gave a damn about her and continued to strive to become as bi-polar and autistic a killing machine as her. Not surprisingly, being in a love triangle with his dead sister/mom and their father was one the more normal relationships in his terrible life.

She claimed legal guardianship over Shinji when Gendo refused to take care of him; like most civilian parents would legally be required to do. Well Commander Abandonment was trying to save the world, so he got a government license to leave. Really, Gendo wasn't much of a father to anyone not cloned from his dead wife. That's WHY!!! Shinji needed Misato to act as either parental figure, someone to drink beers at his violin recitals. Misato proved to be a good guardian, despite Shinji's uppity attitude towards her in the beginning. Her brilliant battlefield tactics come to her by the can; the more beer she drinks, the more simple sounding and less suicidal her battle plans become; a trick she learned studying the drunken meat grinder tactics of Ulysses S. Grant. Thus the more likely her plans are to succeed, according to the physics proposed by unified Anime/Trek theory. It's also tactic used by many K-12 teachers to this day to relate to entities far stupider than them selves; which is why she's a teacher in Shinji's sick fantasy of having a normal life.

Misatos hobbies include drinking, having drunken one-night stands with total strangers, having drunken one week stands with friends, molesting boys half her age, and being a total slob. Like James Bond, Misato has a license to drive drunk. She probably has an important role in the story, but the majority of viewers are transfixed on her hypnotic boobies whenever she starts yammering, and nobody understands the significance of her character. Her first words after being mute for a year were give me beer, which she discovered whilst attending a college party with Ritsuko and Kaji; her keg stands are as legendary as her last stands. Misato actually does make several sexual advances towards Shinji while acting as his legal guardian. One example would be her passionate kiss she gives him in The End of Evangelion, which would make her a sex offender; unless Gendo gave her a license for that as well.

That's it Shinji, just keep trying to drown your self and eventually you'll grow gills. You fail at everything else you try and do right in life.

Another interesting relationship is his relationship to his father, Gendo Ikari, the uber-pimp. Gendo wants to find out if Shinji has want it takes to wear the pimp gloves and the expensive purple suit. Shinji doesn't know what his father expects of him and wrongly thinks he wants him to save the world. This leads to more depression, screaming "these bitches be crazy" and more beat off blisters on Shinji's part. 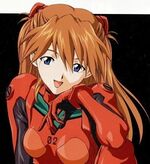 Asuka Langley Soryu, (sometimes Asuka Langley Shikinami Soryu). For some reason, Shinji indulged in Asuka, the uber-bitch and the main cause of the extinction of AVEA plugs. However, as Shinji gets bitch slapped by Asuka all the time, he is unsure whether to ask her to show him her nookie. He is also driven to depression when she gets anally mind raped after failing his Non-Euclidean Geometry test, baffled by the plethora of easy animate angelic shapes, causing him to scream at frequencies audible only to certain species of dogs (specifically other whiny bitches like Shinji).

In the end, after a sequence of events that only takes places in the LSD trip of a leper who had anally taken ecstasy, Shinji is left alone with Asuka and Rei's giant dismembered dead body, which he than proceeded to have sex with in a deleted post credits scene no one needed to see, much like the rest of the movie or the last half of the show after the animators went broke. Shinji saw the red seas stretched before him and like a rooster whose chicken eyeglasses were taken off, developed a blood thirst, reminding Asuka of the pecking order, by giving her throat a long heartfelt hug.

Appreciation for Shinji was the topic of a government public relations campaign, and later, the theme of one emperor penguin's reign.

Kaworu Nagisa was a brother on the down low, whom Shinji knew for all of maybe a week or two, and the only person to unconditionally love him; as his perfect hair needed no conditioner. Asuka and Rei were getting tired of Shinji's two timing, and realized they sold ten times as much hentai to Otaku when he wasn't there; so they left and he got depressed. Shinji than realized he had always been pretty gay; it wasn't some kind of three way choice in a dating sim, so he chose C and became Kaworu's boyfriend. His intimate relationship with Kaworu Nagisa questioned his deep, spiritual belief in the nookie. However, Shinji soon thought not feeling suicidal was just another phase we was going through, like wearing Asuka's plugsuit; so he crushed Kaworu with G-Unit 01's pimpin' hand. Unfortunately this used the last of the animation budget, and neither Shinji's heterosexuality or Kaworu's death lasted more than an hour. Kaworu reentered Shinji's life, a shower of Kool-Aid and confusion, to necromance him.