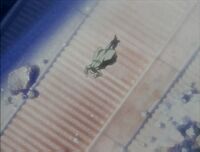 Cowboy Bebop (スパイクの死, Supaiku no Shi) is a 1998 Japanese anime series that tells the story of how Spike dies. Many fans enjoy watching the series, only to find out that Spike Spiegel, the main character, dies. First-time viewers may wonder just how he dies, and will have to watch the entire series until viewing the last episode, in which Spike dies. Otherwise, there is no hint that Spike dies, except for times when he is about to die. Regardless, one should not skip to the final episode, where Spike dies, as it would spoil the rest of the story.

The plot is about two cowboys, Spike (who dies) and Jet, who drive cattle across the stars, while playing their own blend of bebop music. The story is mainly concerned with the events leading up to the death of Spike, the main character, who dies at the end of the show.

Jet does not die in the show, and neither does Faye or Edward Wong Hau Pepelu Tivrusky IV, or even Ein their dog, but Spike might have.

The TV series ends when Spike, the main character, is killed. The last scene is of him dying. No one knows what happens to his friends, who are still alive, and who did not die, like he did.

A Cowboy Bebop movie was made, however, Spike does not die here. This is because the movie takes place a few episodes before the final episode. If it took place after the final episode, it wouldn't make much sense, because then Spike would have been dead.

A Martian and space cowboy who, up until his death, drives cattle across the galaxy. He dies at the end of the show.

A Black man who isn't really black at all. A descendant of the 20th Century Earth thief Daisuke Jigen, he is a cowboy and Spike's partner. He is still alive at the end of the series, unlike Spike, who ceases-to-be quite gruesomely.

Two of the show's biggest selling points (aside from the main character Spike, who dies).

Absolutely nothing I put here can possibly be as strange as the character herself.... ah Hell, let's try anyway. A seven foot tall, 10,000 year-old ex-basketball player, Hindu guru gay alien. Also, a cyborg called "The One" capable of controlling any computer. She went missing as of late 1998, and was last seen in the company of two shifty looking men. Alive at the end of the series, unlike Spike, who meets an untimely end. 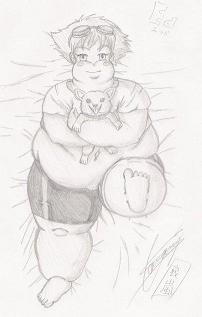 After the show ended due to Spike's unexpected death, Edward Wong Hau Pepelu Tivrusky IV went on to become the new spokesperson for Ben & Jerry's and got all the ice cream she could eat. Spike, however, received none, as he was too dead to eat it.

The WonderDog™ is stolen property confiscated from a Bandito by Spike, who decided to keep it instead of returning it to its owner. Was named "Ein" because that was the name on the dog food dish that Spike bought for it. Is still animate at the end of the series, unlike Spike, who is dead as a door nail.

The main villain of the series. In the end he kills Spike, by chopping open the man's chest. Vicious himself also dies, just like Spike who dies at the end of the show.

She dies by eating pop rocks and drinking Pepsi at the same time, she dies in the same episode that Spike dies; Spike's original lover... no before death, you sicko!

A nomadic Chinaman who predicts that Spike will die, which he does. He is loosely based off of the czar of New Russia Vladimir Putin, who is alive, unlike spike, who is dead

A new character introduced to the series when Spike dies.

It is widely agreed upon that Spike dies at the end of the series.

“I came from the future to warn Spike that he dies, but I was too late and found Spike to have already died and is now dead.”

“He'll always be a hero, even after his death.”

“The series is spectacular, ahh.. really, something amazing. I thought I'd written it, at first. I soon realized, of course, that it could not have been mine.. sigh.. as I've never directed a children's program. Its still very good though... Oh, and Spike dies at the end.”

Unlike the larger body of mainstream anime, Cowboy Bebop is fairly free of annoying, bitchy female characters, tiresome "chibi" segments, and protagonists alive at the end. This unprecedented level of quality led to its banning in Japan, and an official apology from the Emperor to Otaku worldwide. However, despite its critics, it started a new trend for anime where the main character dies at the end of the show, like Spike, who happens to die in Cowboy Bebop.