Alphonse Elric - The Tin Can Man who Can![edit]

Alphonse Elric is also known as the Tin Can Man, Iron Man, or Mark Millar. After he and his brother tried to resurrect their dead hamster, Fluffers, Alphonse lost his body, and his asexual midget brother Edward Elric lost a few limbs. Edward, being an expert Poke'master, sealed Alphonse's body into a Poke'Ball, though after discovering that Pikachu was a terrible roommate, Edward resealed Al's soul in a giant can of Pepsi Max, granting him the name the Tin Can Man. Following this incident, Edward was fitted with Automail, which is expensive tinfoil, by his friendly neighborhood wench with a wrench, Whiny Rockbell, the two set off on their long journey to Finland to find the fabled Topher's Stone, which has the ability to turn anybody into television actor Topher Grace and make Instant Cup Ramen in a second flat. It also serves as a narcotic, penicillin, foot cream, flag of Kansas, ninja tool, aphrodisiac, and cat nip.

Their Merry Band of Minor Characters[edit]

Alphonse and Edward encountered many quirky people on their way to Finland or some other country in Canada. It all started when a tornado swept through the town of Resembool and they were taken to a mysterious town of magic and wonder. The house they were in fell flat on the Wicked Witch of the East, also known as Fuhrer King Bradley, the eye-patch clad sword-wielding terminator of Kentucky. After the house landed on and killed the Wicked Witch, Al and Ed were taken to court on counts of murder, intrusion, conspiracy, and the illegal growing of catnip for Al's army of kitty ninjas. After being released, they met a band of munchkin reporters whose names were Jean Havoc, Kain Fuery, Vato Falman, Haymans Breda, and Mufasa. They were the military toadies of the Good Witch of the North Roy Mustang, who can fry a hotdog using only some white gloves that his wife, Riza Hawkeye, gave him for Arbour Day! Together with a brainless scarecrow named Gluttony, a heartless Tin Man named Bender, a cowardly lion named Sasuke, and their little dog, too Black Hayate, they banded to destroy the transvestite Wicked Witch of the West, Envy. After a grueling journey full of FEEL BAD PUNS and ANGST, Ed and Al reached Emerald City and the wizard of Oz, who is also known as Maes Hughes. Hughes gave them some sparkly red shoes and tells them to tap them together so they can get back to Resembool. Unfortunately, they never made it because they are murdered by Hughes and his horde of family pictures.

Alphonse sexes with a can of peaches in episode three. It is also believed that there was a love relationship between Alphonse and the pimpin' homunculi Greed, although coincidentally both were away on "business" when asked for an interview. None of these claims have been confirmed. Journalists have confirmed that he gets orgasmic sexual stimulation from having Marta (Martel in the original Engrish) crawl around inside of him like a hamster, though.

Other than that, Alphonse is a poke'ball and cannot have sex with things other than fruits, chimeras, and homunculi coincidentally. 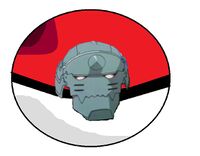 This is the look reporters received as they questioned Alphonse on the topic of his rumored affairs with Greed.

There's also a movie! After the 51-episode anime series ends, all the characters break into song and some fangirls tape it and sell it as a Fullmetal Alchemist movie! In this movie, Alphonse Elric cosplays as his brother, the asexual midget Edward Elric and gets into merry maheym, which includes having murderous tea parties. A few characters in this movie are forced to watch Naruto jazzercise and die shortly thereafter. (ZOMGSPOILERS) They include Hohenheim, Alphonse Heiderich, Adolf Hitler, Envy, You, Mufasa, Naruto, Mr. Sentouki, All the Men in Black, Your mom, and Homer Simpson. In The Conqueror of Whambamshalam, we learn that World War Two was actually Alphonse Elric,Edward Elric, and their pimp Roy Mustang's fault.