From Uncyclopedia, the content-free encyclopedia
Jump to navigation Jump to search
Batman The Big O
left 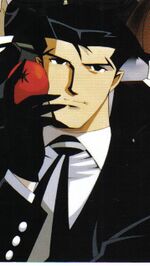 Roger negotiates a bum fight with an apple tomato. The bums beat him up and fought over the apple tomato subsequently.

For those without comedic tastes, the so-called experts at Wikipedia have an article very remotely related to The Big O.

The Big O (also known as The Neverending Story) is an anime series created by J.J. Abrams. It is a historic milestone because it is one of few anime shows to be famous in America.

The Big O takes place in Spare-a-Dime City, which is called such because the citizens of said city lost their memories forty years ago and have become lazy bums who insist upon asking for money, borrowing your car and eating your funyuns and then not buying anymore when you're out. Because of this attitude, there are a lot of fights - especially between homeless historians over cheezburgers and sammiches.

Roger Smith is a negotiator in the city and by "negotiate", I mean "move the plot along". He is also happens to live in Batman's old mansion, which Batman lost prior to this in a bet to Superman and had to live in a dumpster with Aquaman. He also has Batman's butler, whom he calls Norman instead of Alfred. Oh. And he has a robot. Can't have an anime without a robot chick.

Roger Smith: Roger is Spare-a-Dime's top negotiator. He is also rich for some reason and owns a giant robot that NO ONE seems to really notice he owns, especially when its underneath his giant house. He owns a robot maid and is convinced that he is a tomato. He likes wearing black clothing, including a black bathrobe and a black tuxedo, which is strange since he seems to be amongst the richest members of Spare-a-Dime city. He is also the great grand-son of Phoenix Wright.

R. Dorothy Wayneright: A robot who Roger owns despite the fact that people in Spare-A-Dime city don't even have Internet, let alone robots. Her main purpose is to save Roger's ass when he's (usually) getting it kicked by random hobos.

Alfred /Norman: Alfred is Roger's badass butler who Roger calls "Norman", despite the fact he constantly restates "I'm Alfred, Roger. ALFRED." every episode. He is also packin some serious heat. He still isn't as good as Sebastian from Black_Butler ,though Sabastian often visits him in order to borrow some proper wardrobes.

Angel: Angel is the local stripper in Spare-a-Dime City. She often joins Roger on his quests to rid the city of evil, since giant robots and Batman wanna-bes make her wet. Oh yeah, and she's some robot or something. I don't know. I stopped paying attention during the last couple of episodes. Her Robot's name is Big Venus.

HushSchwartzwald: Schwartzwald's name was originally Mickey Seebach. Mickey used to work at a company in Spare-a-Dime until everyone realized he was a complete douchebag and had him fired. This drove him mad and he joined the darkside and became Mumra.

Alex Rosewater: Alex is a greedy corporate ass-hole, which no show is complete without. He also has a robot for some reason that is never explained either. Alex's "daddy" also farms Apple-Tomatos, so it is expected to see hobos trying to attack him over his near-infinite supply of Tomato-Apples that he receives from his father.

Beck: He's supposed to be a parody of Lupin III but comes off as a complete douchebag, until the end where he tells/teaches Dorothy how to help Rodger and Big O fire their "big gun" together with Dorothy connecting directly to Roger and their Baby, Big O.