Neon is in the periodic table of elements. Neon Genesis Evangelion is a candidate for inclusion in the occasional table, but may have to enter under the pro-forma name "that crazy Japanese mecha show", since the table committee expected confusion between the two elements. One committee member then pointed out that "that crazy Japanese mecha show" isn't a unique name either, sane mech pilots are as non existent as their robot's gravity defying knees. So the committee is adjourned until the Japanese are done making crazy mecha shows, which will be when Japan is by hyper evolved flying pigs.

Both shows are about candy robot shells with a chewy metaphysical robot fantasy center and have a capital E in their title, which to 83% of people make them the exact same show. The two mecha shows are mirrored like chiral molecules, Evangelion is about a simultaneously pathetic yet talented boy surrounded by competent women and Escaflowne is about a simultaneously pathetic yet talented girl surrounded by competent boys. 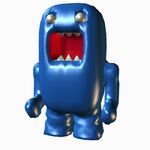 Early test type of Evangelion Unit 00. The prototype was orange (to see this one, obsessively press the "negative image" button on your computer monitor, or if you have a Macintosh obsessively press squirlysquare-line ducking under other line-ctrl-8 for the same effect. Seizures may occur.)

The early designs of the Evangelion Mecha was rejected by the director of Evangelion. After his psychiatrist had gotten him down from the book case and treated him for two more sessions, Anno had gone through bargaining and sorrow and reached the stage of acceptance. He permitted the designs to be used for the Eurg, while the Evangelions were re-designed to resemble 80's running shoes that had mutated into humanoid shape under the influence of too much bling radiation.

Just because this show is completly involved with world domination via disturbing antics committed by a schizophrenic girl and her female cat/dog/thing is generally more than reason enough to confuse it with Evangelion, but on top of that there are unstable and disturbing women constantly dying and showing the world how mentally deficient they really are, and on top of that they both end with everyone being covered in blood and screaming about bad directors while some weird-ass pimp is killed. Plus it gives you just as good a high.

Neon Genesis Propagandist Evangelion (NGPE) is a show about middle aged propagandist, and their fight against a crooked propagandist who perverts and uses the wrong business plan.

This show is surprisingly dissimilar from Evangelion, since it's live action, has no teenagers in the main cast and has high production values. On account of the title, however, it is a common occurrence to find the DVDs of one in the DVD cases of the other. The situation caused a two month strike by the Video Store Clerks of America, and multiple lawsuits filed by angry anime fans who claimed mental scarring from accidentally watching a live action show, and even worse: not made in Japan! Non anime fan who got NGE over G.I. Joe and Saving Private Ryan by mistake filed many lawsuits, however, because they, unlike many anime fans, didn't need to have NGE explained to them over and over again. But preferred WWI shit instead. They were also more untolerant about the use of their illuminati symbolism in the show. Alice Hansen (76, Park City, MT) commented: "It's not cool to see illuminati symbolism being used in that way because it's all propaganda, and like to see that cartoons are no longer that empty slapstick nonsense they had on when I was little. I didn't expect psychoanalysis. I wanted action and would have said "Hell it's about time". They wanted to see some ass kicking while chewing bubble gum. Of course, I would have preferred an actual psyco story or war movie, but it was all right."

Gundam, Neo Ranga, Dual, Transformers, Gundam Wing, Eureka Seven, Gundam 00, Transformers Cybertron, Transformers Armada, Gundam Z, Dragonball Z,G Gundam, Dragonball GT,Code Geass: Lelouch of the Rebellion Inuyasha, Megas XLR, Macross, Digimon, Hamtaro, Kirby Morrow, Sonic X, Warhammer 40k the list goes on and on until eventually it stretches into outer space and people on other planets see this insanely long thing sticking out from the solar system and causing such a hazard to interplanetary travel that cargo shipments have to be re-routed causing delays that reduce the shelf life of goods and dent the profit margins of shops so they petition for the building of new hyperspace bypasses to get around it but the construction project never gets started because the mandatory archeological, historigraphic and pornographic surveys are so mindbogglingly stumped as to what the hell Neon Genesis Evangelion is and what possessed the people of Earth to make and watch such a thing and write seemingly never-ending run-on sentences is about it in encyclopedias that will be vandalized from uselessness into even more uselessness and the galactic traffic administration is forced to commit ritual riverdancing with tutus and Bernaise as penance for their failure to alleviate the problem.

Gaijin often mistake the sticky orange mess that is End of Evangelion, for a 90 minute commercial for Tang. This is incorrect however, as the fourth wall is broken so often; that it is clearly meant for Kool Aid.