For those without comedic tastes, the so-called experts at Wikipedia have an article about Digimon.
Whoops! Maybe you were looking for Pokemon? 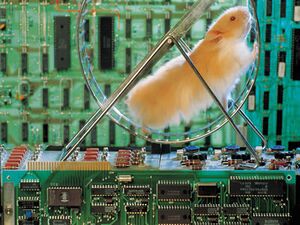 Digimon is a Japanese media franchise designed to rip off both Tamagotchi and Pokemon and make Bandai and the figurine factories a lot of money. Or maybe not; some believe it's a psychological exploration of childhood internet and video game addiction, a representation of the Buddhist concept of illusory nature of life dhamma, or as the greatest trans humanist manifesto to hit America from Japan since Transformers. The franchise is best known for a series of exploitation TV serials where a number of teenagers are thrown into the Digital World of colourful talking monsters, where they walk across the internet of the 90's on Webabout, to find strength on their neo shamanic ritualistic passage into adulthood with the help of their spirit guides, while overcoming their own angsty teen issues, which are in no way connected to their late night gaming and web browsing. Digimon are able to turn into other Digimon through a process called "digivolving" which involves absorbing tons of digital data for it to work, explaining why dial-up and broadband connections are always so slow.

Legend tells that Bandai bought the company from Tron in the 90's, developing the Digital World and a method of converting children into electricity. Sadly, Digimon aren't nearly as cuddly as Pokemon, what with their philosophical wangst, so they lost, and the Digital World had to be rebooted and re branded by the time Bandai was purchased by Seto Kaiba in the 2000's.

Differences between Digimon and Pokemon

The primary digi-difference between Digimon and Pokemon is: 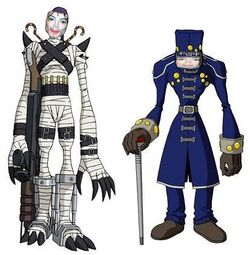 Davis Motomiya - The main gogglehead of this season, Davis is a clone of Tai only his hair is short and his ego is through the roof. He even stole Tai's trademark goggles. Very annoying but likeable, Davis has a huge crush on Kari and often gets TK's name wrong. He is partnered with Veemon, a Sonic the Hedgehog lookalike who has a wacky voice, and introduced the Armour Evolution into the series, which is basically the Champion-level but you use Digieggs to make the evolution happen. Davis eventually opens a noodle cart at the end of the series and marries Veemon.

Yolei Inoue - The token tomboy girl with glasses. She wears a helmet on her head and she has a family of cardboard cut-outs. She likes to rip off other characters like Izzy and has her own catchphrase "Perfecto". For a brief time she becomes a lesbian with Mimi, but ends up marrying Ken of all people. Her partner is Hawkmon whose gender remains a mystery.

Cody Hida - The short, quiet and sensible kid, Cody knows kendo. He pretty much sucks the fun out of everything when he enters a room but we love him anyway. His father died of plot exposition, and he lives with his grandfather who gets drunk on prune juice. His dad was friends with Oikawa. Cody's partner is a Texan-accented armadillo named Armadillomon, who digivolves into Digmon who makes too many puns on his drills, a submarine(!), an ankylosaurus, and fuses with Angemon to become Shakkoumon the Teapot.

Ken Ichijoji - The angst character, Ken starts off as the Super Sentai villain Digimon Emperor who rules the Digital World like a crybaby. He has nice clothes, though. After having a nervous breakdown and gaining bland clothes, Ken becomes good over time. His brother Sam was hit by a car. Ken was used by Myotismon to test his drugs called Dark Spores that turn people crazy and evil for fun. He is partnered with Wormmon who suffers a lot and sort of commits suicide halfway through the series, but comes back later on.

The Original Digidestined - The eight original kids and their Digimon appear as supporting characters, although TK and Kari have big roles. TK now sports a hat and kicks Ken's ass, whilst Kari's personality changes every episode. Matt becomes a rock star and marries Sora, much to Tai's and the fanbase's sadness, Mimi moves to New York just in time for Cloverfield to occur again, Joe becomes a doctor and Izzy gets taller.

BlackWarGreymon - A clone of WarGreymon, as all heroes need evil clones. He is emo most of the time and eventually kills himself by flying in the air.

Yukio Oikawa - The major villain of the series, although he is really Myotismon's toy. Having a fetish for purple and looking like a dead Keith Richards, Oikawa wishes to go to the Digital World by means of brainwashing little kids with drugs. He used Ken to test the Dark Spores, and created the phallic Dark Spires to break down the barrier between Earth and the Digital World. He is murdered by Myotismon, then turns into a flock of butterflies to guard the Digital World.

Arukenimon and Mummymon - Oikawa's henchmen. A creepy pedophilic spider woman and a lovesick mummy, these two are Team Rocket's arch nemesises. Capable of appearing in human form, the two hang out together and drive around in a motorcar. The two are eventually killed by MaloMyotismon, Arukenimon explodes after being eaten by Myotismon's many mouths and Mummymon is melted down by red streamers.

Takato Matsuki : He never payed attention in school; he would always just draw random pictures of dinosaurs. That's bad, right? Actually, he gets his very own digimon out of it. That just shows kids that if you don't pay attention in class, you can get a dinosaur!! He's really young, and goes to the digital world for some reason.

This is why you should never give small animals coffee.

She is the embodiment of all your sins... as a fox!

Jenrya Lee (Henry)Takato's Seme : He is Chinese and the smart one of the group. Stereotype, much? Henry tries throughout the season to be a main character, but is thwarted by Takato at every turn.

Rika Makino: She's an emo girl with a t-shirt with a broken heart on it. The first 9 episodes, she is seen reading Twilight books. She eventually starts to battle with her trusty pal Renamon (I could throw some furry joke in here, but I'm going to take the high road). Near the end of the series, Breaking Dawn came out, and she became a recluse yet again.

Jeri Kato : She whines A LOT. She keeps complaining for a long time, and eventually gets a digimon! But, Beelzemon quickly kills it afterward. Terriermon eventually kills her in a fit of wanton rage.

Beelzemon : His name is a clever wordplay on "Beelzebub". Yes, that's the word they use in the Wayne's World song. Anyway, he spends the first part of the series as an annoying arsonist with a bad Brooklyn accent. He then makes a deal with the devil and becomes immensely stronger/eviler. From there, he starts killing many digimon, but quickly realizes that all he ever wanted to be was a Greaser. He finds a motorcycle and begins his dream. Soon afterward, he meets up with the Digipals. He starts his Fonzie impersonation, but Leomon critiques his performance. As a result, he fuckin kills Leomon. Later, he finds an arm gun, grows a pair of wings, and is suddenly cool.

Calumon : This thing is way too adorable. I mean, even adorable for anime. Anyway, it turns out to be a pretty big plot influence. The triangles on his head oddly match the triangles on Guilmon. Was there a little digi affair there? You digitell me. Anyway, you never find out whether Calumon is a digi-boy or a digi-girl, but it doesn't really digi-matter.

Terriermon : Basically, he's a bunny WITH A HORN! As he digivolves, he gets an insane amount of ammunition. He later becomes massive, like a transformer, and can measure up to the highest skyscraper in the city. He is the "funny bunny" of the group and is always around to say "momentai" whenever needed. Nobody thinks his phrase is funny or relevant at all. This is how he digivolves:

I burned down how many orphanages?

out and killed over 500,000 (and counting) of her perverted fans, leaving six billion of them still alive.

This is how she digivolves:

Guilmon : He's a dino-digimon, but he acts more like a dog-digimon. You know, if dogs could digi-talk. He's red and has triangles all over his body, thus he is one of the strongest Digimon. Triangles are wicked strong. Being a digimon, Guilmon does not know the difference between good and bad.

I only burned down how many orphanages?

This is how he digivolves: 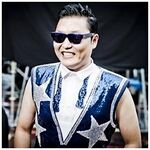 Digimon Frontier has six main characters, who can shapeshift into Digimon, tossing three seasons worth of rules out the window. The Digimon evolution line is also scrapped in favour of "human" and "beast" forms which are accessed via "Slide Evolution". It can make your head hurt. 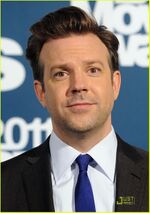 Koji Minamoto - Resident emo and angsty guy for no reason. Becomes more of a nice guy but never really gets over his unnecessary angst. He fittingly becomes Lobomon, a wolf man with lightsabers. 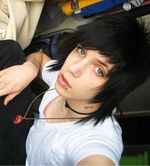 JP Shibayama - An obese kid in a jumpsuit. He is the only one in the group with a brain, and transforms into Beetlemon who kills enemies with popular rock songs.

Tommy without his fucking huge hat.

Zoe Orimoto - An Italian-Japanese girl whose too attractive for her own good. She often says Italian words just to remind the audience where she is from. She transforms into Kazemon, also called Kickassmon. 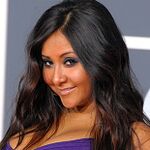 Hollywood Whore, passed out on the floor, can't take it no more, i'm sorry but the party's over.

Koichi Kimura - Koji's brother who was separated at birth for some reason. He turned evil after falling down a staircase, becoming Duskmon who did a lot of brooding. After turning good, he transformed into Lowemon. 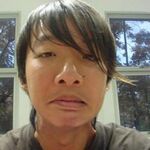 Bokomon - A bossy but smart brainiac who is married to a book.

Neemon - Comic relief and retard who sounds like an old woman who downed a glass of gravel.

Seraphimon, Ophanimon and Cherubimon - The three protectors of the Digital World. Cherubimon turned evil, killed the other two and did evil stuff. The three return as the lovable Patamon, Salamon and Lopmon.

Grumblemon - Spirit of Earth, Grumblemon is a big-nosed moron who no speak proper English. His temper is as short as he is, and he wields a big sledgehammer. He can digivolve into Gigasmon, who looks like a deformed hotdog. He is killed by JP.

Arbormon - Spirit of Wood. The dumb guy who sounds like Sylvester Stallone. He digivolves into Petaldramon. He was raped and killed by Duskmon.

Ranamon - Spirit of Water. Ranamon is a strange demented mermaid who thinks she is pretty, and speaks in a southern accent, so watch out y'all. She digivolves into the hideous Calmaramon who looks like Anne Robinson on a good day. She has her ass kicked by Zoe.

Mercurymon - Spirit of Steel. This mirror-faced villain speaks in thy medieval accent, and is very good at it. Thou is very good at speaking like a posh twat and acts like one too. Mercurymon kidnapped Seraphimon's spirit and turned it into an evil version. He can digivolve into Sakkakumon, a thing. He is smoted by Takuya through screaming.

Duskmon - Spirit of Darkness. Darth Vader's cousin, Duskmon is a brooding person who questions his existence. He has a pair of lightsabers and can shoot laserbeams out of the various eyes on his body. He can digivolve into Velgemon, a giant scary bird. He is Koichi's evil form.