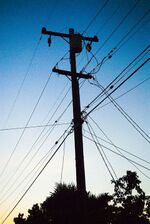 One of the main reasons for the success of Serial Experiments Lain.

Serial Experiments Lain is a critically and commercially successful(ish) Japanese anime that aired in September 1998. The show is notorious for its incomprehensibility and complex themes, which include existentialism, conspiracy theory, and telephone wires.

Serial Experiments Lain tells the story of Lain Iwakura, a 14-year old girl living in a Japanese suburb with her apathetic sister, cold mother, and computer-obsessed father, and her adventures in the Wired, the Japanese equivalent of the Internet.

(Screenshot of telephone wire and its shadow)

The series is completely normal up until 15 seconds in[1], when a seemingly regular girl named Chisa Yomoda jumps off a building and kills herself.

(Words flashing on a psychedelic background: I don't need to stay here. What is God?)

(Gibberish about an ancient conspiracy involving a children's tag game)

When Lain receives the e-mail at home, Chisa claims that she is not dead, but has merely "abandoned the flesh," and has found her true self in the Wired.

Throughout the series, Lain discovers things she never knew about the Wired and about herself.

But she unleashes a power that she doesn't know how to control.

She is forced to take radical action to resolve her quest for identity in the Wired.

(To be continued... or something.)

Lain Iwakura. Well, I'm pretty sure it's Lain. At least I think. But I can't be sure.

Lain Iwakura: A 14-year old introverted Japanese girl, who suffers from split personality disorder and identity crisis, and happens to be a carbon copy of herself, who was born in a virtual world. Also, she's God.

Eiri Masimi: A man who worked with Lain's father at Tachibana Labs who killed himself to become God. That didn't work well for him.

Yasuo Iwakura: Lain's father and Eiri's co-worker. Apparently, once his daughter gets into computers, he's fine with leaving her alone for life.

Mika Iwakura: An apathetic 16-year old who picks on her little sister, goes out with her boyfriend and goes shopping a lot. A perfectly ordinary highschooler- until she gets stuck in the space between the real and digital world. She eventually becomes a telephone.

Taro: A kid, about Lain's age, who enjoys activities such as hanging out in clubs, playing video games, and delivering government information to an anonymous group of hackers/conspiracy theorists.[2]

The Men In Black: Nobody knows...

The show is well known for its complexity and unconventionality. It is described as an "alternative anime," substituting a linear plot and storyline for dialogue with imaginary characters and pictures of bleeding shadows. Mental illness, particularly dissociative identity disorder, is a significant theme in Lain.[3] Throughout the series, Lain's several personalities get in the way of her real self. This can be taken literally or as a metaphor for identity crisis, addiction to technology, or paranoia.

Lain has three different personalities: the real-world, childish Lain is quiet, shy, and loves dressing up as a bear, the "advanced" Lain of the Wired is bold and questions authority, and the "evil" Lain is cunning, devious, and goes out of her way to be a total bitch. Each one of these characters' meaning has been debated. Some claim they stand for the way different people communicate with the world and themselves, how we are not as in control of the digital world as we think, or possibly the different stages of a teenage girl's life.

The main theme of Serial Experiments Lain is communication. Writer Chiaki Konaka claimed he wanted to directly "communicate human feelings" by discussing human communication in its widest sense, not only as opposed to loneliness, but in and of itself as well. Director Ryutaro Nakamura wanted to show the audience, particularly viewers between the ages of 14-15, "the multidimensional wavelength of the existensial self, the relationship between self and world," but he failed because all the 14-15-year-olds were too busy watching Bleach.

Serial Experiments Lain employs several theological themes as well. Concepts such as the possibility of an infinite spirit in a finite body play a large part in the development of the show. Because of this, the show has been viewed as Scientology promotion by several experts. Director Nakamura has denounced these views, claiming he did not intend for the show to have any undertones or overtones of Scientology promotion whatsoever, but that he can't be sure because even he doesn't really know what it's about.

Producer Yasuyuki Ueda was questioned several times about a statement he made in an interview with Animerica magazine. In the interview, he claimed that Serial Experiments Lain was "a sort of cultural war against American culture and the American sense of values Japan adopted after World War II." He stated in a series of interviews succeeding the aforementioned one that he concieved Lain with a set of values he perceived to be "strictly Japanese," such as "off yourself and you will live on as a digital being," and that he hoped the American and Japanese interpretations of the show would be different. This would lead to a "war of ideas" between the two countries, and hopefully culminate in new communication between the two cultures. When he discovered that the views were similar, he was disappointed.

Serial Experiments Lain was first broadcast on TV Tokyo at 1:15 AM JST. The word "weird" was almost systematic in its appearance in English language reviews, along with the alternatives "bizarre", "atypical", and "fucked up." Critics responded positively to the many complex themes and freedoms taken with the animation, and it was awarded an Excellence Prize by the 1998 Japan Media Arts festival for "its willingness to question the meaning of contemporary life" and the "extraordinarily philosophical and deep questions" it asked. Newtype USA's Christian Nutt said "the main attraction to the series is its keen view on the interlocking problems of identity and technology." American interpretations of the series varied from person to person. Some saw it as a commentary on reality, others on technology, and some saw the activities Lain partook in throughout the series, such as meeting herself online, fighting a secret non-entity, and becoming omnipotent, as a description of everyday Japanese life.

Lain has been subject to discussion in the literary and academic worlds as well, being shown in several universities across the country. One class requires college students to watch the anime and write a 1,000 word essay describing their view on the psychological and theological concepts. Many of these articles consisted of the word "mindfuck" written 1,000 times.

Oh, gee! After watching Serial Experiments Lain, I totally get who I am!

I just watched this 7 times. For 3 days I did nothing but sit here and watch it. SEVEN FUCKING TIMES.

Oh wait, I get it! Lain's not really Lain! That's it! Those three days I spent in front of the TV with a botle of Dr. Pepper in my hand finally make some sort of sense now! Lain's not actually real! YES! Sweet mother of god, I finally got it!

If Lain's not Lain, who is she?

Man, I hate this show.

I need a fucking job.