From Uncyclopedia, the content-free encyclopedia
Jump to navigation Jump to search
OS-tans
left

For the religious among us who choose to believe lies, the so-called experts at Wikipedia have an article very remotely related to OS-Tans.

The OS-tans are a team of combat androids who work as mercenaries in Asia and the Western United States.

Ten years ago, a team of combat androids were sent to prison by a military court for a crime they didn't commit. These girls promptly escaped from a maximum security prison to the Asian underground. Today, still wanted by the government, they survive as mercenaries. If you have a problem, if no one else can help, and if you can find them, maybe you can hire the OS-tans.

Troubled Windows was a secret project between the United States, Japan, and Microsoft in the late 1980’s. The goal was to create a team of combat androids who look like teenage girls. The program is shrouded in mystery, and some rumors suggest that the technology was stolen from a crashed alien mothership. They are named after computer operating systems, mainly Windows-based.

After combat trials across the world, they were presented to the Defense Department. However, they were rejected and the program cancelled. Due to a freak programming bug, they then went on a rampage and almost killed 1700 people in Tokyo. It was this incident that got them put in military prison until they escaped in 1995.

Realizing that they needed to get back the OS-tans, the expensive and pointless Department of Homeland Security created Firefox-Ko to find the OS-tans. Currently, Firefox-Ko was seen at the fall of Baghdad, but her location is unknown to this day.

95-tan is one of the four main OS-tans. She was created out of the successful build of 3.1-tan, but has better armor and combat matrix. She is specialized in the use of hundreds of weapons. She is 50% samurai, 50% sweet girl, but mostly samurai. Her favorite method of killing is to use a katana to slice her victims to death. The only information about her was a small DUI charge in Los Angeles, but due to the incompetence of the LAPD, her location remains unknown.

Me-tan is one of the four main OS-tans. She was activated in 1994 and was one of the last original OS-tans. She was built as an experiment to see if the ALI-17 Control Module could be used in a smaller, lighter design. The project was a failure, but her combat is deadly. She seems cute and somewhat of a klutz on the outside, but is a vicious killer. She has many methods of killing, but her favorite is to use a leek or crowbar to smash her victims to death.

2000-tan, also known as 2k-tan, is one of the four main OS-tans. She was activated in 1992, and was the first OS-tan to use the ALI-17 Control Module, which gives the android almost human tendencies. She is an assassin, but her services are not limited. Her alias is "The Reliable Woman" and last whereabouts were in a slum in Shanghai. She uses guns as her main method of killing, but was trained in many methods.

XP-tan is one of the main four main OS-tans. She works best as a seductress, using her large breasts to seduce to politicians and military men. She will kill occasionally, but her beauty is better used in other ways. She has a younger brother and sister, Homeo and Homeko. They were designs that were stolen by Me-tan in 1999 from Redmond, Washington. They are part of the OS-tans, but are not part of the core members. Homeo is a young boy, who is also a transvestite, poorly suited to the duties of the OS-tans. Homeko decided to become a hentai artist after being shot in the foot in 2003. The location of all three models is unknown.

Unlike most other OS-Tans, Nanami was exclusively known for her involvements (or rather, isolation) from the Hellenistic turmoil, unlike most other OS-Tans known for mercenary activities in modern periods. Nanami was a Somatophylax of Alexandros, but in the Battle of Gaugamela (Nanami Madobe presumably have the power to time-travel) commanded the left wing of the pike phalanx, while Alexandros III attacked with the Hetairoi from the right. Nanami Madobe was very well-rounded: Nanami wasn't only a general, but also a politician, and even a cook: In fact, the Windows 7 burger was so popular in Iaponia that Nanami wished to implement it on her domain in Karchedon. Although it is rumored that Nanami has a bouncy bust, that is a Japanese lie created by perverts. In reality, Nanami is flat-chested. 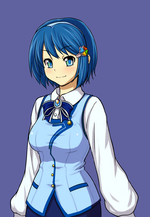 Unfortunately, Greek truths are often overlooked in favor of lies of the perverts.

Although the official records state that Nanami Madobe is the official mascot for Japanese release of Windows 7, that is an outright lie. Nanami's real name is Peukestas, which isn't surprising since Nanami was one of Alexandros' somatophylakes. Japanese perverts also fabricated information about Nanami's attires, which supposedly were comprised of short skirt, long stockings, brown shoes and a dress derived from school uniform, but it is more likely that Nanami wore linothorax. This makes even more sense since OS-tans are largey military in nature, and school uniform is anything but military. Additionally, Nanami is ILLITERATE IN JAPANESE, since Nanami's official language is Unicode. Surprisingly to the Japanese, Nanami is fluent in Greek, even though Japanese is more widely available in Internet than Greek, a fact that the Hellenes don't really care about.