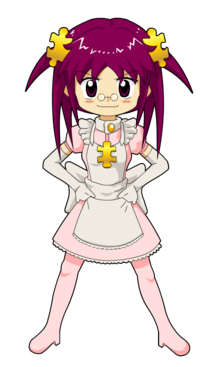 Because of their so-called intelligence, the so-called experts at Wikipedia will never have a proper article about Uncyclo-tan. We are sorry they insist on being this lame.

Uncyclo-tan (アンサイクロペたん Ansaikurotan?) is a character from the popular Japanese manga series, The Troublesome Life of Wikipe-tan: A Wikia Story (ウィキペたんの厄介な生命：ウイキヤ物語 Wikipetan no Akukai na Namainochi: Wikia Monogatari?), as well as the unofficial "mascot" of Uncyclopedia. Her character was designed to be the human personification of Uncyclopedia. In the manga, Uncyclo-tan is often portrayed as a comedic foil to the main character, Wikipe-tan, who was designed similarly as the anthropomorphic version of Wikipedia. The "-tan" in "Uncyclo-tan" indicates that she is below the age at which she can experience the feeling of love.

The idea of Uncyclo-tan was first introduced by a group of Wapanese, anti-tuber, Uncylopedia users who wanted desperately to have a secondary option for a mascot to worship. After presenting their case to the powers that be, the group was immediately eliminated by the cabal politely asked to leave — a request to which they happily complied with. Long after the protesters had vanished moved away, a revised version of Uncyclo-tan was proposed by the powers that be. A majority vote marked the official recognition of Uncyclo-tan as an unofficial "mascot" of Uncyclopedia.

The famed Japanese cartoonist, Akira Miyazaki-Shinkawa, was later commissioned to write a script involving the characters Uncyclo-tan and Wikipe-tan for an animated film, which would be produced in collaboration with Japanese animating powerhouse, Studio Ghibligibi. After many problems involving merchandising rights, Miyazaki-Shinkawa was forced to step away from the project. Shortly after, a no-name manga artist was hired off of the streets, and payed with hot dogs, to publish the story as a serialized comic, The Troublesome Life of Wikipe-tan: A Wikia Story, in Japan. The series was later translated for a western audience and ported to Europe and North America, where it quickly established an obsessive, sexually deviant fanbase.

Uncyclo-tan (sometimes referred to as "Un-tan") is the mischievous, though good-natured, friend of Wikipe-tan. In the manga, both girls attend Wikiversity in the fictional Wikicity, Japan. While Wikipe-tan is an academically gifted student, active in many clubs, Uncyclo-tan tends to be lazy and unmotivated by schoolwork. Instead, Uncyclo-tan will resort to writing unbelievable works of fiction, drawing caricatures of fellow schoolmates, or simply sitting around and making sarcastic comments as people walk by. While Uncyclo-tan's personality can be off-putting to others, it is for these reasons that she and Wikipe-tan are best friends; for, many people also tend to avoid Wikipe-tan due to her above-average intelligence and social awkwardness.

As Uncyclopedia's unofficial "mascot", it is Uncyclo-tan's job to ban noobs, keep up public appearances, and look cute while doing it. While the latter two tasks may seem harrowing, they are, in fact, quite simple, and pose little challenge. For these reasons, Uncyclo-tan spends most of her time traipsing around the less desirable parts of Uncyclodpedia in search of trolls and vandals. While Uncyclo-tan has no specific weapon of choice, she can be seen wielding anything from a ban-hammer, to a ban-tree. Most frequently, however, she will be seen with the ban-stick (nicknamed "Teh |34|\|0|2"), with which she endlessly jabs and prods at those who offend her taste until they cease and desist being stupid.

She was also one of AE-tan's mortal enemies. Uncyclo-tan doesn't mind unless directly attacked.