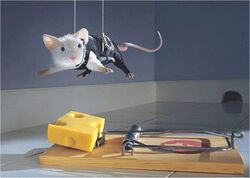 Ordinary mousetraps have been rendered ineffective.

For eons, there have been burning questions that have chafed mankind like that rash I got on spring break in Tijuana. Questions like "Why is the sky blue?", "What is the meaning of life?", and "Do you want fries with that?" have left scholars, theologians, scientists, and philosphers dumbfounded since the dawn of time. Thankfully, experts have finally answered one of these questions. No, not one of those above, a new one. Try to keep up.

For slightly less time than eons, man has asked himself, "Can I build a better mousetrap?" The answer to that query is a resounding "Probably." In fact, if you follow the instructions below, you could be wearing a fashionable home-made mouse fur pelt by next month.

The common household mouse, rodentius mischieviousous (plural mousii), is a formidable opponent, often succeeding in such devious schemes as eating your cheese and bullying your poor hamster. They thrive in conditions found in homes, barns, and Bennigan's Restaurants™. A definite indication that you have a mouse problem would be a perfectly semicircular hole in your wall at ground level (or "mouse station zero"). In order to experience the awesome power of the mouse, simply place a small wedge of cheese on the floor near this mousehole. You should then see waves of cheese-scent enter the hole, followed by the rodent floating out in a state of mild euphoria. Sure enough, before you can react, you are left cheeseless.

The mouse is a super-intelligent species, not to be taken lightly. They are quite lethal, though they generally will not kill humans, as that would harm the proverbial goose that laid the golden egg (where the goose is human and the golden egg is cheese of indeterminate color. Also, the human doesn't lay the cheese). Oftentimes a mouse will tie a human's shoelaces together, illustrating the cruel nature of the species. A mouse is capable of recognizing and avoiding conventional mousetraps, and even setting its own crude 'human-traps'. They are able to function independently, but also have been known to form alliances with each other in order to maximize both their general havoc-wreaking and cheese-getting.

An engineer mouse is seen here, disabling a standard mousetrap.

Mousetraps first made an appearance in the Dark Ages. However, this was before such things as 'metal' and 'technology' had been discovered, so these primitive devices were not very effective. Mousetraps of this era typically consisted of large wooden catapults, small wooden catapults, or contraptions consisting mostly of serfs. As a result, the Black Plague killed millions of Europeans who were defenseless against the biological warfare tactics of rodents everywhere. Eventually, technology caught up to the mouse, and a new type of device rid people of virtually every mouse on the planet. For the last eight hundred years, the standard 'cheese on a piece of metal which gets mercilessly smacked by another bit of metal when the cheese is removed' design has been proven to be effective and efficient. Humans have enjoyed a Renaissance of sorts during this period. Being undistracted by thoughts of a better mousetrap (for there was no need for one), mankind succeeded in such great accomplishments as landing on the moon, eradicating diseases, and achieving a seedless watermelon.

For those without comedic tastes, the so-called experts at Wikipedia have an article about Mousetrap.

However, in the last decade, mousii have finally started to turn the tides against the ruthless killing power of the mousetrap. Using a variety of tactics, these crafty varmints are swindling cheese from the jaws of such devices with remarkable success. While not usually caught in the act, it has been reported that these methods include protective headgear, elaborate pulley systems, and cryogenics (in order to freeze the killing mechanism). In short, placing mousetraps around your house, which was once the lead cause of household mouse fatalities, is now tantamount to door-to-door cheese delivery for mousii by you.

Since the dawning of this 'golden age' the mouse community is currently enjoying, many attempts have been made to improve the quality of the mousetrap. Many have focused on building upon the basic design of the existing device. However, none of these alterations have proven even remotely successful. Modifications made to enhance the sensitivity of the trigger and the potency of the killing mechanism have led to a sharp increase in finger amputations. Attempts to disguise a common mousetrap as another mouse have proven ineffective and massively time-consuming. Claims of additions of laser technologies and invisibility capabilities have been dismissed by mouse experts as "bollocks".

Others have taken another road and chosen to focus on alternatives to the traditional device. Some claim that placing a dollop of peanut butter in the bottom of a glass, turning the glass upside-down, and balancing one side's rim on a quarter is an effective non-lethal method of trapping a mouse. These people are sorely mistaken. Resorting to non-violence is seen as weakness by the mouse, who will both eat the peanut butter and steal your quarter. Similar non-lethal traps such as sticky paper are used against the human who set them, frequently resulting in glue-related catastrophes. Unnecessarily involved attempts to get rid of mice are also rarely successful. An example of this would be fumigation, which is both over-the-top and totally ineffective (again, mousii are proficient in the art of biological warfare, and manufacture a wide range of adorably tiny devices to protect themselves, including little gasmasks and tiny orange biohazard suits).

A diagram of what your result should look like.

So, now that you have the background, you need to start thinking of how to outsmart this highly capable enemy. If you're having second thoughts (perhaps thinking that the mouse isn't hurting anyone and is kind of cute), don't forget that any mouse would kill you and your whole family, given the chance. Now then, what you need to do, is exploit the mouse's weaknesses. Now, you might say "Easier said than done!" In this case you are a quitter and can't be helped. Otherwise, let's carefully construct a strategy for countering these tiny, malevolent masterminds.

Now, most people are under the impression that mousii are virtually invulnerable, and have no weaknesses whatsoever. "Balderdash!" is what you should say to those people. If you carefully study photographs of a known or suspected mouse, you will notice that the eyes are positioned on either side of the head, in order to provide a greater range of lateral vision. This means that horizontal visual acuity is sacrificed; thus, the mouse is susceptible to attacks from above!

Now that you've determined the direction of attack, you should build outwards. A common mistake is to use recent technology, such as titanium-plated gears, infrared cameras, and magic. This is a mistake; the mouse easily recognizes and avoids any such trickery, using its twitchy whiskers and little feet, respectively. What you should do is go with materials that the mouse is unlikely to be suspicious of: old boots, wooden gears, and antique bathtubs come to mind. This should all be assembled in a ridiculously complex system, requiring the successful completion, in series, of at least one dozen chain reactions that eventually trip the final attack from above. Some sort of piano or trapezoidal-shaped weight will do the trick; alternatively, you could use a cage and taunt the captured mouse at your leisure.

You should, with these instructions, be able to construct a device that will have far greater success than an average mousetrap. However, you are reminded that no method is foolproof, and the almighty mouse is certain to eventually adapt again. In that vein...

If all else fails