“It's all very simple if you've read McLuhan. Human beings were all connected in the beginning. The Wired simply re-established those connections and... What? Evangelion? Well damned if I know.”
~ Oscar Wilde on Human Instrumentality Project

The Human Instrumentality Project, one of the chief pillars in the religion of Evangelion, has long been a matter for debate among Nerv clergy, as well as such famous thinkers as Thomas Aquinas, Plato, angsty pseudo-intellectual teenagers, and middle aged geeks who are too old to be watching cartoons don'tcha know. (You guys know I love ya.) The search for answers as to what the project really is has led to four leading theories:

Theory 1: The Human Instrumentality Project is the Egg MacGuffin.

Theory 2: The historical drama Neon Genesis Evangelion detailing the Judeo-Christian, abstract-art, ancient-alien, angel-apocalypse of 2001 was careful not to side with any particular theory. But when the production company came into some extra money, the director and his actors were allowed to create a short film that explained the project according to the theory they had come to favor. This theory has since gained a large following but has been unable to displace the first as the most popular, nor has it been generally accepted into Eva canon. According to this theory, the Human Instrumentality Project was a big orgy (maybe more than one) conducted at Nerv Wreck headquarters with all staff involved, except for Commander Ikari, who just sat there with his hands over his mouth like always doing nothing but looking sinister doing it. The purpose of all the unprotected sex was to save mankind by... generating energy, or making babies, or something, it's all very Wilhelm Reich. I think it's some kind of vague philosophical, psychological, Kabbalah thing that you're only supposed to half-understand. Followers of this theory claim they chose it because "[I]t's fucking [h]ot!" Even those who reject the theory agree: it is pretty hot.

Theory 3: Another theory in Neon Genesis Evangelion is that they intended "Human Instrumentality" to raise Man to their Final Evolution because humans have lost a certain something. Curiously, per the diabolical plans of Gendo Ikari, in this state of Final Evolution all human beings would resemble TV's Gary Coleman circa 1986. This detail was subtly alluded to in the drama series when Misato Katsuragi demonstrated dissent toward Ikari, saying "You're going to break all of our AT&T Fields? Whatchu' talkin' 'bout, Willis?!. (Hopefully everyone caught the subtext)

Theory 4: The Human Instrumentality Project doesn't exist. This is why it has been so loosely defined. By convincing people of its importance, Gendo Ikari has been able to successfully funnel trillions of yen into pointless science fiction fantasy projects: needlessly sophisticated, giant humanoid battle mecha with high centers of gravity where tanks would have been much easier to design and implement; 14-year-old, blue-haired sexual servants (he totally was and you know it); vacuform body suits for said girls; etc.

Everything is going exactly according to plan, including that part where the animation budget ran out and there were two different endings.

Alt Theory 1: According to the popular graphic novel artist Stephen King, the Human Instrumentality Project is really a rip off of the Instrumentality of Mankind, a group of Superheros by famed comic writer Cordwainer Smith. The Instrumentility is made up of Catgirls and funny named people like Lord Jentocost, Lady Not-From-Here, Sir Loveaduck, and Mark Elf. The job of this superhero team is just to sit back, and have a good time.

Alt Theory 2:Theologian and radio therapist George Carlin produced his own explanation of the Human Instrumentality Project. "It's a topless bar near the airport. Come on, I'll show you."

Alt Theory 3: The Human Instrumentality Project is a three step program for those recovering from failure of life, a condition displayed by many prominent characters in propaganda driven series Evangelion. The three main componants of the program, to be undertaken over a coarse of 20 or so years, are:

Alt Theory 4: The Human Instrumentality Project was to have been a progressive rock supergroup featuring guitarist Jan Akkerman (Focus), keyboardist Patrick Moraz (The Moody Blues), singer/flautist Ian Anderson (Jethro Tull), drummer Carl Palmer (ELP), and bassist Chris Squire (Yes). Touring and band obligations kept the group from forming during the 1970s, and a general lack of enthusiasm for prog rock put the last nail in the coffin in the 1980s. Then, in the future, Gendo Ikari developed a vested interest in the use of progressive rock as a tool for world (and space) conquest. He believed that the credentials of the men who were to have formed The Human Instrumentality Project made them the perfect instrument with which to conquer the world (and outer space.) With audio cassettes that could store up to 60 minutes of music per side, the potential for city-crushing prog-rock epics was higher than anything man has ever been able to chart (surpassing even Tales from Topographic Oceans, the resulting floods of which very nearly depopulated Australia.) The threat this kind of power created in the hands of Gendo Ikari caused SEELE to mobilize, storming NERV HQ and killing everyone they could. The only survivors were Shinji, who was after all the star, and Rei, who had used a demo tape put together by the band one member at a time to transform into some kind of giant goddess/angel/Eve/Lillith/omni-mother/some kind of philosophical thing that you're only supposed to half-understand. Asuka survived, too, why not; I'd totally hit that. The world was only saved (narrowly) by a team of heroic monsters: Godzilla, Rodan, Mothra, Gamera, and Robert Smith of The Cure. Also, this takes place in the future, meaning that future events such as these will affect you in the future.

Alt Theory 5: The entire thing was just one really big, really elaborate and really wacked-out promotional campaign for Tang™. Yeah... try not to think about it. After all, wouldn't you rather just quench your thirst with a nice tall glass of, well, Tang™??? 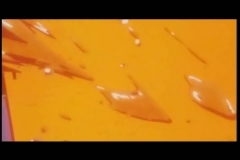 Theory 14: Some believe the Human Instrumentality Project and the The Phantom Fetus to be one and the same; however this is ridiculous as one wears a tiny domino mask to hide his identity as mild mannered, unnamed zygote, and the other wears Gendo's glove, so they are clearly not the same legally non person.