“What do you mean, living in the past?” 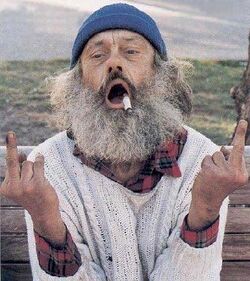 Ian Anderson relaxing at home (circa 1995)

Ian Anderson is mostly credited with inventing the flute with which he performed with an old bum guy known as Aqualung in a band known as Jethro Tull, who was the lead singer and a former agriculterist. Incidentally, he created the flute by accident, while attempting to invent the seed drill with Tull, the flute was an unfortunate unsucessful first attempt. However, it led Anderson to become a member of a great classic rock band.

While Anderson and Tull first started developing the seed drill, Aqualung was sitting on a nearby bench, eyeing children with bad intent. Whilst knawing on a piece of steel and attempting to find some food, Aqualung broke a tooth, in surprise, the steel bar flew into Anderson. The drill Tull and Anderson had been working on punctured several holes in the bar while blunting the brand new drill.

Aqualung came rushing over in horror of what he did and picked up the bar. Needless to say, Anderson and Tull were very angry at Aqualung, and confiscated the steel bar. With a quick look in the bar, Anderson saw that There really was food in the bar. Shocked, Anderson took a deep breath a blew into the bar, a sweet sound emerged after the food came flying out of the other end and hit Aqualung. Both parties were delighted and formed a band named after Tull.

Agricultural Improvements of the 18th Century[edit]

They recorded several famous albums. Among which are Thick as a Brick, mostly known because it only had one song on the whole album. That one song was widely acclaimed to be too short and the St. Cleve Chronicle (a newspaper which has since gone out of business) dedicated a Sunday paper to discuss how an eight-year-old could have written the song. Another famous album, Aqualung, named after the band member, spoke of Aqualung's life before the band and his near death experiences.

Ian Anderson was pronounced insane soon after the peak of Jethro Tull's success, and was sentenced to ten years in a mental asylum. While conventional insanity testing methods suggested Anderson was sane, there were two simple reasons why Anderson was definitely insane:

An interesting note on Anderson, the lyrics to his songs always fell into three categories:

The music was the bands strength, and they showed it when they performed the Aqualung album live, and didn't sing a word. They audience that night enjoyed the music so much, that version is available at E-bay Amazon, and many other online stores. The lyrics were so unnecessary, one fan that night declared, "Everyone's saying this sounds different, it sounds the same to me." So we see that ‘Tull, Anderson, and Aqualung, had such lame voices or lyrics (you decide which), that they decided to no longer record music with lyrics. The result was the first few seconds of Liquorice Breath, a famous song off of Aqualung. But the band was bored by then, and decided to once again begin to sing.